Former Dallas Cowboys linebacker Jeff Rohrer, 59, became the first known N.F.L. player, past or present, to marry a man when he wed Joshua Ross, a 36-year-old aesthetician Sunday at the Wattles Mansion Gardens in Los Angeles. 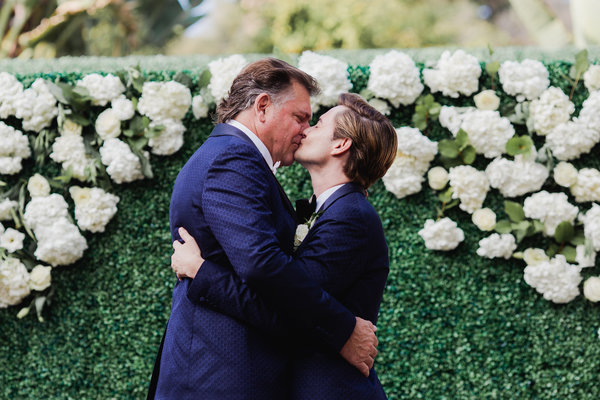 Among the 150 guests was Mike Saxson, a former punter with the Dallas Cowboys and teammate of Mr. Rohrer’s during his playing days in the 1980s. Though Mr. Saxson was the only Cowboy to attend, Mr. Rohrer said he received congratulatory texts and emails from many of his former teammates, including the wide receiver, Mike Renfro, the tight end Doug Cosbie and the defensive end Ed (Too Tall) Jones. John Spagnola, a onetime Philadelphia Eagle, also sent his best wishes.

“This wedding broke down walls,” Mr. Rohrer said Monday afternoon. “You would not believe how people from both of my worlds came together and had a blast, proving that people are really just people, and that love is the thing that needs to be celebrated, no matter who is in love, or who is getting married.”

Isabella Rohrer, Mr. Rohrer’s 15-year-old daughter, sang Elvis Presley’s “Can’t Help Falling in Love,” when the couple were first introduced, “which had everyone crying their eyes out,” Mr. Ross said.

Long after the exchange of vows and wedding rings, Mr. Rohrer, a producer of television commercials who is also a painter, sculptor and master potter, showed yet another talent when he picked up a guitar and sang “Don’t Let the Rain Burn You, Baby,” a song he had written for Mr. Ross. It began with the words: “I was looking for a friend, someone who would understand, but I was too afraid.”

But the celebration didn’t end there. After the wedding, a large contingent of guests made their way to the Abbey, a well-known gay bar in West Hollywood, Calif., and continued the party with both grooms.

“Best night of my life,” Mr. Ross said. The couple are flying to Paris for their honeymoon, but not before they taped an interview with “Good Morning America,” which is expected to be shown Tuesday morning.