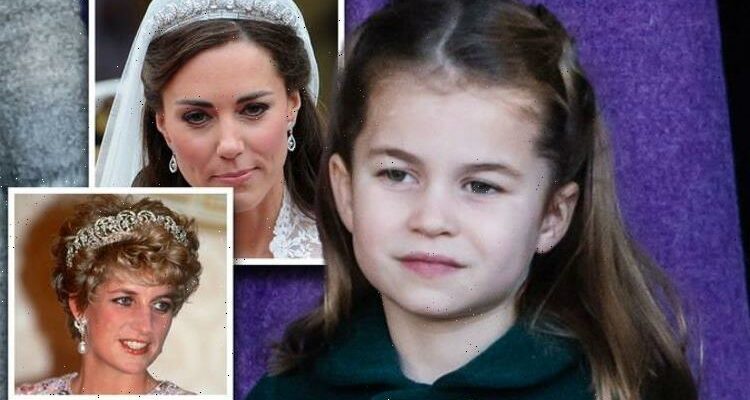 Princess Charlotte of Cambridge is fourth in line to the throne, and one day she is expected to be the daughter of a King. Charlotte will likely be eligible for a high-profile royal wedding in the future if she decides to tie the knot. And as royal tradition dictates, Charlotte would likely have her pick of the Royal Family’s extensive tiara collection for her big day. Here are four of the royal tiaras Princess Charlotte could pick.

Princess Charlotte could follow in the footsteps of her mum Kate, Duchess of Cambridge, and wear the Cartier Halo Tiara for her wedding day.

The Cartier Halo Tiara was originally a gift from King George VI to his wife Queen Elizabeth, the future Queen Mother.

The tiara was then gifted to the couple’s eldest child, Princess Elizabeth, to mark her 18th birthday.

Although the tiara has stayed in the royal collection, the Queen doesn’t publicly wear it, but it has become known as an iconic royal wedding tiara.

Princess Charlotte could be the fourth generation of Windsor women to wear the Queen Mary’s Fringe Tiara on her wedding day.

Queen Mary’s Fringe Tiara was famously worn by the future Queen Elizabeth II when she married the Duke of Edinburgh in 1947.

If Charlotte wore the tiara for her big day, it would be seen as a traditional and touching tribute to her great-grandmother.

The tiara is also steeped in royal history, originating from the 19th Century.

The Queen Mary’s Fringe Tiara was created on the commission of Queen Mary, King George V’s wife and the current Queen’s grandmother.

The tiara actually started life as a necklace, which was gifted to then-Princess Mary as a wedding gift by none other than Queen Victoria.

The Spencer Tiara is not technically a royal tiara, as it doesn’t belong to the Royal Family.

The Spencer Tiara belongs to the Spencer family, and it was worn by Lady Diana Spencer for her 1981 wedding to Prince Charles.

But it is understood Charlotte could have the opportunity to wear the tiara in the future as Diana’s granddaughter.

An insider told GoodToKnow: “William is close with his uncle and has asked if his mother’s namesake tiara can be given to Charlotte someday.

“William is quite aware the earl has daughters of his own, but the two have agreed that Diana’s iconic piece belongs to her first granddaughter.”

Princess Diana frequently wore the Lover’s Knot Tiara during official engagements, and now it is a firm favourite of Kate, Duchess of Cambridge.

Princess Charlotte may wish to pay tribute to her grandmother and her mother by wearing the stunning tiara for her wedding day.

Also, as the tiara has not been worn for a high-profile royal wedding, the Lover’s Knot Tiara could be a unique choice for the future bride.