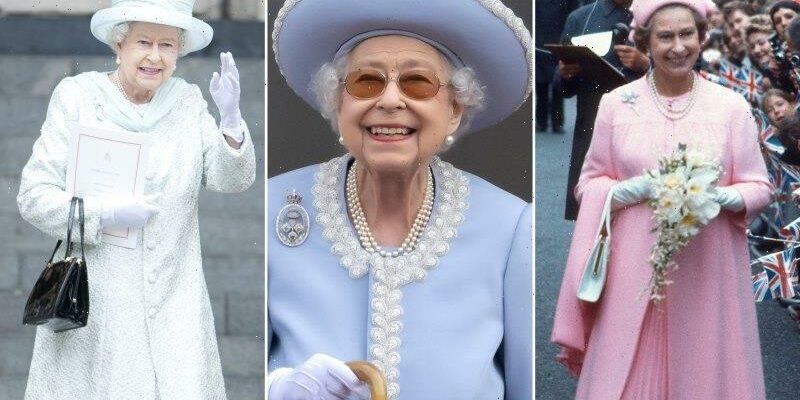 Hat. Check. Coat. Check. Pearls. Check. Gloves. Check. The serene uniform the Queen wore for the Trooping the Colour parade on Thursday was as predictable as the finger sandwiches that arrive by her side at 4pm for afternoon tea (corners removed, please).

In a pale dove blue Charmelaine wool dress, hat with a pearl and diamanté trim and matching jacket adorned by Queen Mary’s diamond Brigade of Guards Brooch, worn every June for Trooping the Colour, the Queen was immediately recognisable, no crown required. 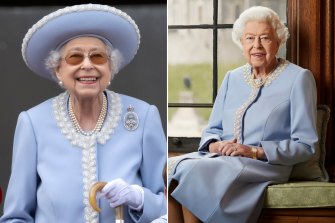 The Queen’s diamanté and pearl trimmed outfit worn to Trooping the Colour was designed by her personal advisor Angela Kelly and also worn in her official Jubilee portrait by Ranald Mckechnie.Credit:Getty; Royal Household/Ranald Mackechnie via Getty Images

This was unexpectedly the grandest moment of the Queen’s Jubilee celebrations, as she will no longer attend the Service of Thanksgiving at St Paul’s Cathedral on Friday. Past outfits worn at the religious ceremony are currently on display at the Palace of Holyroodhouse, Scotland.

The basic block colour and brooch approach taken at Trooping the Colour stretches back to the Service of Thanksgiving at the Silver Jubilee in 1977, but this year the Queen selected the ensemble without the final arbiter of her fashion choices, her husband Prince Philip, who died in April last year.

The opinionated and sometimes abrasive Duke of Edinburgh was the casting vote on the Queen’s outfits according to Australian artist Ralph Heimans, who painted Her Majesty for the Diamond Jubilee in 2012, with the acclaimed portrait now hanging in Westminster Abbey.

In the exhaustive lead-up to the one-hour sitting, Heimans requested the Queen wear the purple silk velvet, 6.5 metre Coronations Robe, with wheat and olive branch details that took 12 embroiderers, 3500 hours to stitch. 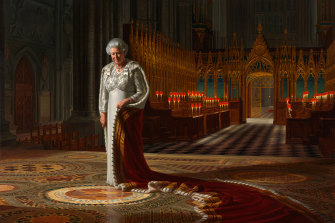 “What she wore was discussed before the sitting and went through the palace, where she had direct input,” Heimans says. “Everything has great significance. When I requested the Coronation Robe, the response was the Queen would have to think about it and discuss it with Prince Philip.”

The answer from Prince Philip must have been a resounding “no”, as the Queen arrived with the crimson velvet Robe of State, decorated with handmade gold lace and lined in ermine from Canada, along with three dresses. The final selection was a bejewelled gown by the former official dressmaker to the Queen, Norman Hartnell.

“As the Queen was painted on the Cosmati Pavement in Westminster Abbey where the throne usually sits, it wouldn’t have been appropriate for a two piece, pearls and a handbag,” Heimans says.

Now, Liverpudlian dressmaker and the Queen’s personal adviser Angela Kelly has the final words, having designed the Trooping of the Colour outfit, which also appears in the official Platinum Jubilee portrait by Ranald Mackechnie. 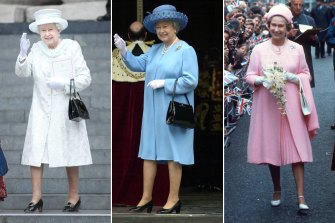 Kelly also designed the pale turquoise dress and coat embroidered with scattered silver flowers, with coordinating hat, worn by the Queen for the Diamond Jubilee in 2012.

It was after Prince Philip agreed with Kelly’s opinion that the Queen should wear a coral hat backwards on a trip to Malaysia in 1998, that she rose through the ranks from her role as senior dresser.

“The Queen couldn’t believe that this would work. I told her that, if she did not believe me, she should consult the Duke of Edinburgh, as he always tells her the truth,” Kelly wrote in The Other Side of the Coin: The Queen, the Dresser and the Wardrobe. “She had consulted His Royal Highness and, after an amusing conversation, in which I imagine The Duke didn’t hold back, the Queen had decided to wear the hat the wrong way around, as I had suggested.” 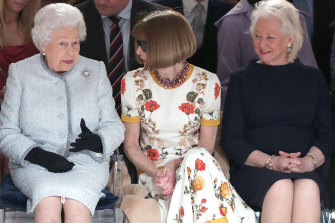 Queen Elizabeth with US Vogue editor Anna Wintour and her official dresser Angela Kelly at London Fashion Week in 2018.Credit:Getty

Kelly has cemented the formula of block colour hats, skirt suits and coats that allow the petite sovereign to be spotted easily by onlookers, such as the daffodil ensemble worn to the opening of the Elizabeth Line at Paddington station last month. For evening events, Kelly often selects pale blues and soft pastels as a backdrop for the monarch’s jewellery.

Fortunately, Kelly has better luck with hats than Australian milliner Frederick Fox who created the “pink bells hat” worn with a pink silk crêpe and chiffon dress and coat from Sir Hardy Amies for the diamond jubilee in 1977. In a furore to rival Princess Beatrice’s “toilet” hat by Philip Treacy for the 2011 wedding of Prince William to Duchess Kate, the pink turban with 25 flower heads hanging from silk stems was described at the time by Labour MP Neil Kinnock as looking “like a disconnected switchboard.”

“The Queen’s style has evolved subtly over time,” says Dr Cindy McCreery, an expert on royalty and senior lecturer at the University of Sydney. “It is always of the moment. The turbans have gone and little details shift. It is appropriate and of the time.”

The most dramatic change is the absence of the Queen’s greatest fashion critic.

“When Prince Philip died there was an image of the Queen alone in Westminster Abbey, where her expression is similar to the one in the Diamond Jubilee portrait,” Heimans says. “Heavy is the head that wears the crown, even when she’s not wearing it.”