‘I’m worried you’ve given me something,’ he said. ‘Are you sure you’re not contagious?’ 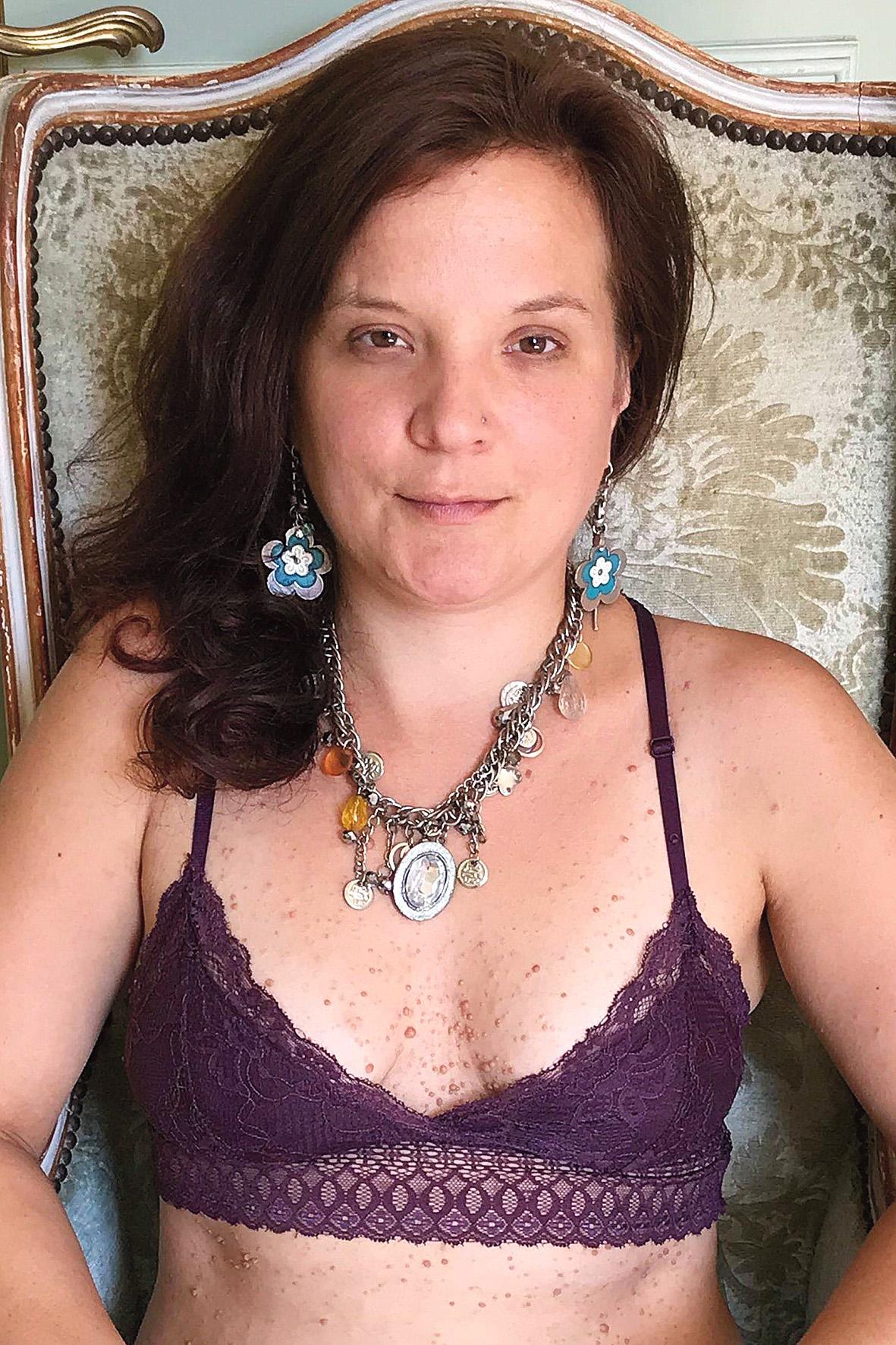 As far as dating disasters go, it’s one I’ll never forget. I was mortified and frustrated.

I’d been upfront from our first date that the skin tags covering my body, including my groin and vagina, are a symptom of a genetic condition.

I insisted that I wasn’t contagious, but I already knew we wouldn’t be seeing each other again. If he couldn’t trust me, this wasn’t going anywhere.

At the last count, I have around 200 skin tags, but more are growing all the time, on my torso, back, limbs and scalp. 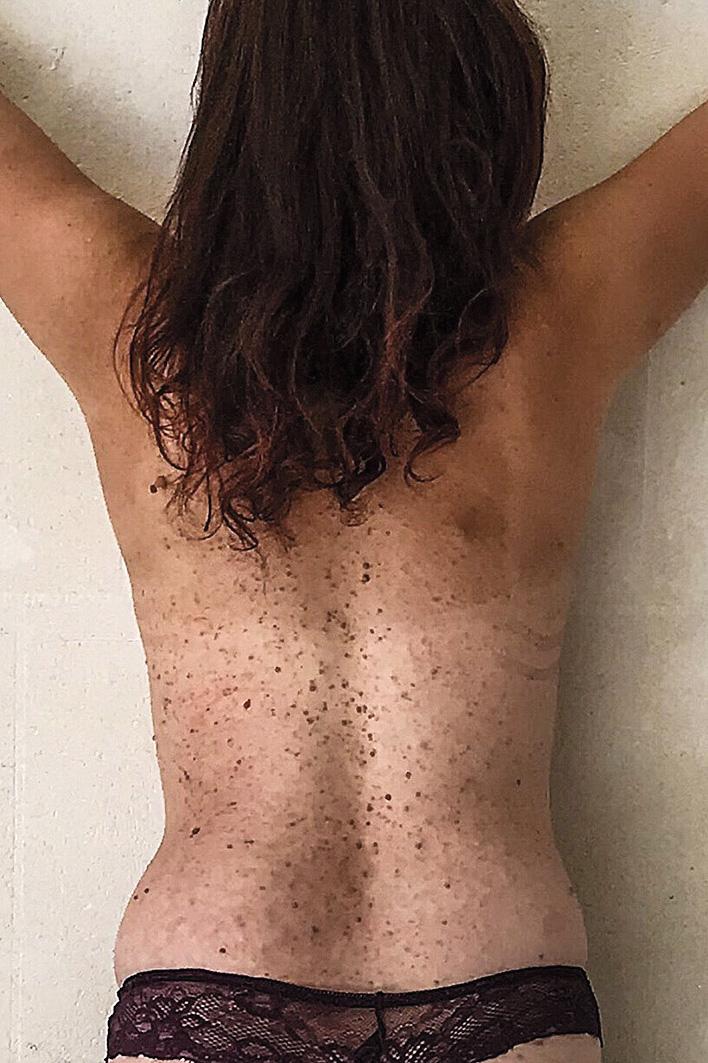 They’re a symptom of neurofibromatosis type 1 (NF1), a condition causing benign tumours to grow on nerve endings, both internally and externally.

I was diagnosed at 18 months after my mum Elaine, now 63, noticed birthmarks on my torso.

She took me to a paediatrician, who said they were a symptom of the condition and I could expect the tumours to grow inside and outside of my body for the rest of my life.

For most of my childhood my skin was clear. Instead, I would get tumours on my spine or elbow. When I was six, I had to have an operation to cut away one that had been growing on a nerve in my hand. 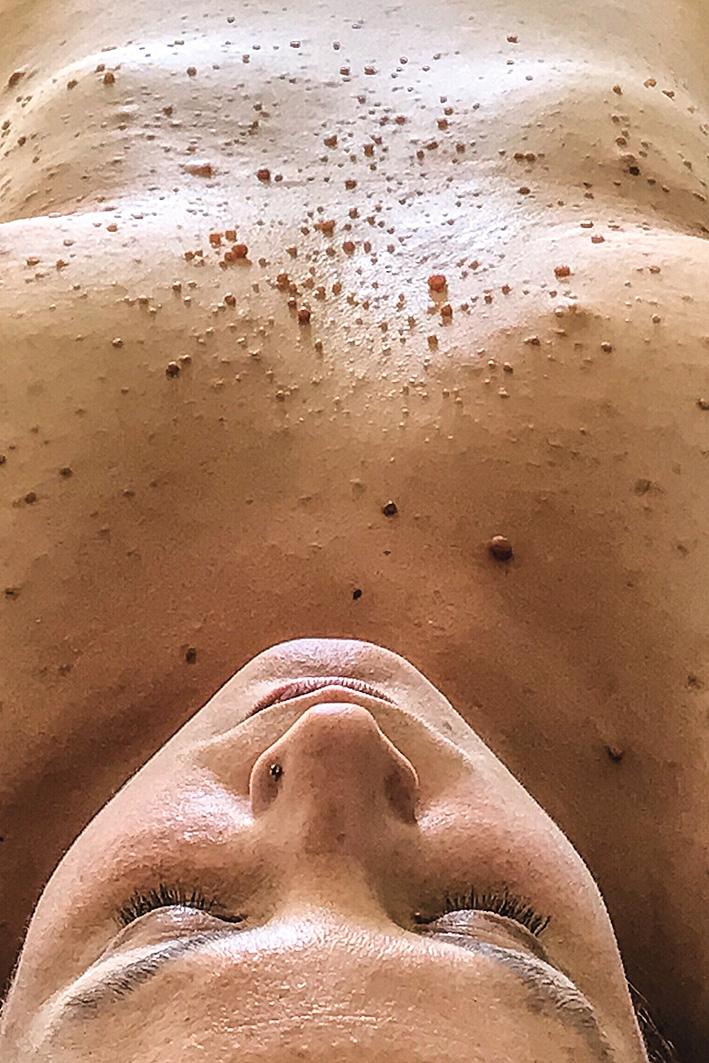 Of course there were times I wished I was like other little girls, but my parents did a good job of making sure I didn’t worry about my differences, and I rarely let them affect me.

However, when I hit 14 I began to have back pain caused by tumours on my spine. And at 23, I found the first cluster of skin tags on my back.

I wasn’t shocked, as I understood NF1 could cause lesions, but the speed they grew stunned me. Ten could appear in a day, then none for weeks, but over time they’ve spread all over my skin.

Some days I would look in the mirror and feel I’d lost control of my body, desperately hoping they wouldn’t spread to my face or neck where clothes wouldn’t hide them. 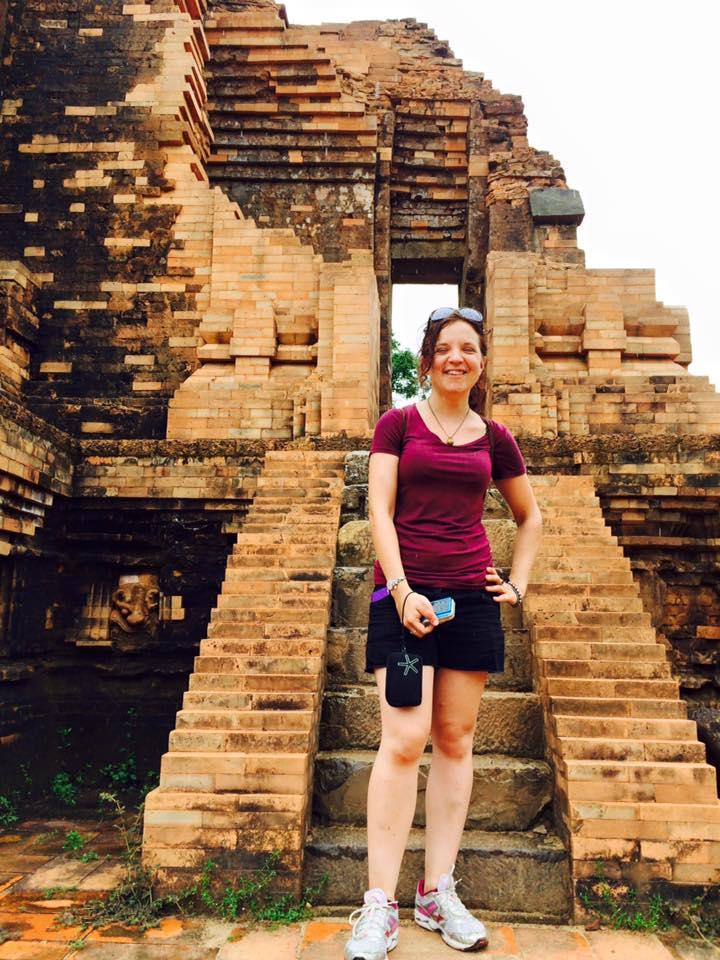 I now have some on my shoulders, and it’s possible they could keep spreading upwards. But until they start appearing on my face, there’s no point worrying about them.

Over the years, I’ve grown to accept them and I refuse to feel ashamed. In the summer I’ll wear a bikini on the beach and vest tops when I’m out, and people do stare. The children and students I work with are often curious and like to touch them and ask me about them.

I’m happy to answer their questions. With people I know, like colleagues, I’m very open, explaining about it before they get a chance to ask.

I realise it can be shocking for people, which is why whenever I’ve had a date and wanted to progress the relationship, I’ve been upfront. After all, they’re not something I can hide if we’re going to be intimate. 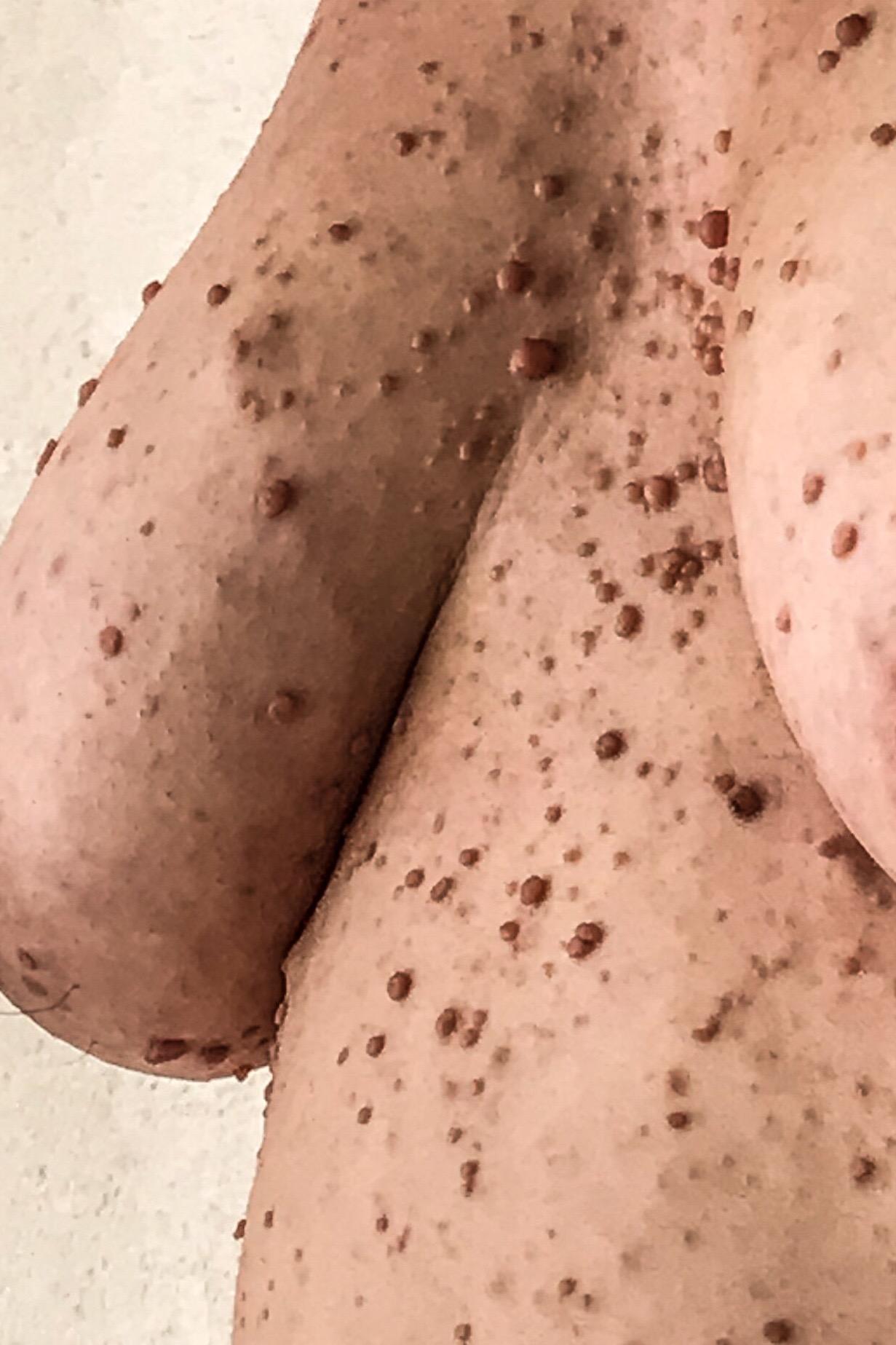 Some guys aren’t fazed – one guy liked them because he said it felt nice. But two others, including the one at the bar, accused me of having an STI because I have them in my groin, which was hurtful.

Unsurprisingly, I didn’t see them again.

Despite horrible moments like that, the skin tags are the least of my worries. They don’t cause me pain and they’re not damaging my health. The tumours pressing on my spine, however, are very painful.

And because they’re inoperable, I could end up paralysed, which is terrifying. Since childhood my condition has also triggered bladder weakness, which means I sometimes wet myself. Most days, I try to bring spare trousers and knickers with me just in case. 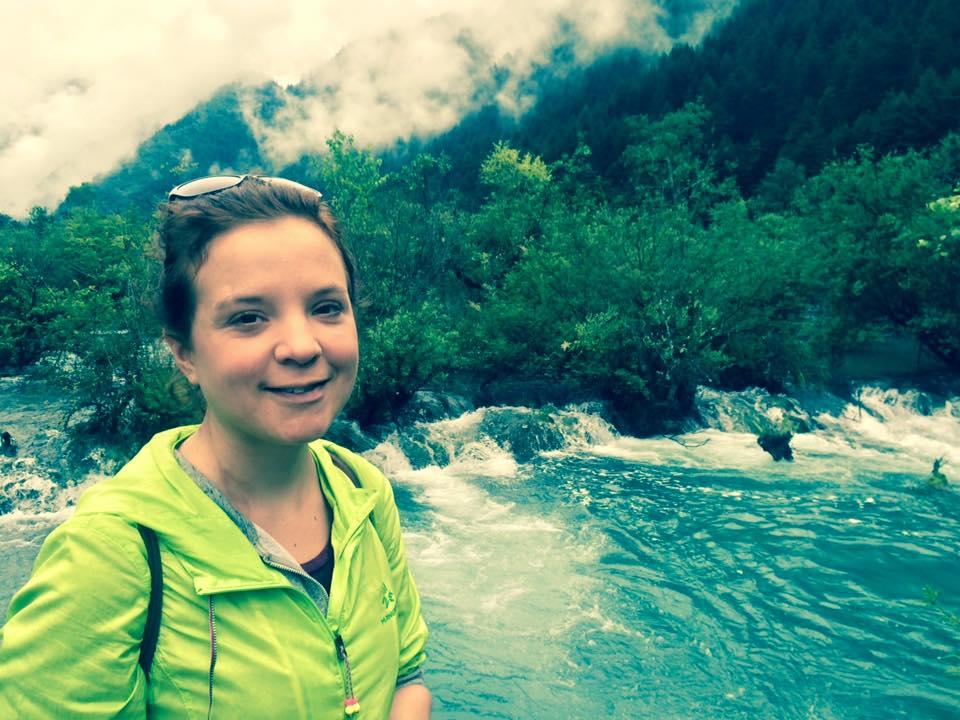 Although my condition is genetic, my parents aren’t carriers, but there’s a 50% chance I’d pass NF1 on to my own baby. I’ve decided not to have children, which is heartbreaking, but I may consider adoption.

I’d love to meet the right man one day, but he’ll have to accept my skin tags and see past them to the person I am.

After all, they’re a visible reminder to me that life is too precious to worry about how I look, or what other people think.