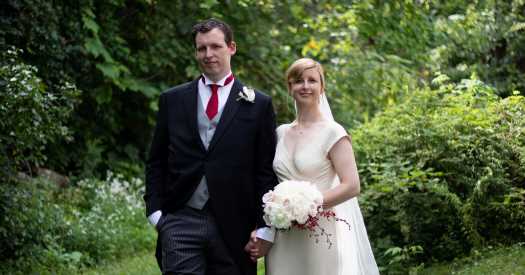 In February 2018, Anne Catherine Bredin thought she’d had a great first date with John Francis Greey Brandon. After matching in the 98th percentile on OkCupid, the couple met at de Mole, a Mexican restaurant near Ms. Bredin’s apartment in Sunnyside, Queens (Mr. Brandon lived in Greenpoint, Brooklyn). Later, as they walked to the nearby Maggie Mae’s Bar, they shared a kiss.

They exchanged texts afterward. But when Ms. Bredin asked about meeting up again, she never heard back. Mr. Brandon’s enthusiastic response, it turned out, had not gone through. Both were surprised by the radio silence, but chalked it up to dating in New York.

In the following months, Ms. Bredin, who grew up in Belfast, Northern Ireland, threw herself into her first semester at Benjamin N. Cardozo School of Law, where she recently earned her law degree. Previously, she’d been the logistics manager at the Perrotin contemporary art gallery in Manhattan.

“Maybe I should try dating again,” she remembered thinking after finishing her first semester in September.

When she got back on OkCupid, Mr. Brandon was the first match to pop up. Ms. Bredin decided to reach out. After realizing the earlier technical issue, they had their long-delayed second date.

“Kudos to her for not giving up,” Mr. Brandon said. “She brings out the best in me.”

Mr. Brandon, 35, who goes by JF, is the vice president of marketing and business development at BotFactory, a maker of 3-D circuit printers. He graduated with a degree in economics from Simon Fraser University in Vancouver, Canada, in 2012; that same year he was the curator of the Rygo, the largest 3-D printed sculptural concrete artwork at the time in North America (now in his parents’ backyard in Ottawa, Canada, where he grew up).

By March 2020, Mr. Brandon began moving his belongings into Ms. Bredin’s apartment. Then, the coronavirus hit, and they decided to wait it out a couple of weeks at her family’s farmhouse, a 100-year-old property in New Ipswich, N.H., which was originally home to her maternal great-grandparents from Finland. They ended up staying 10 months.

“I spent my summers growing up there, and it was nice to introduce JF to things familiar to me,” Ms. Bredin said.

After he recovered from a weeklong case of Covid when he first arrived, they immersed themselves in the land. They planted corn and squash; he built a fence for their two cats and a large catapult for fun. At Mr. Brandon’s insistence, they also cared for feral kittens living underneath their neighbor’s barn.

Still, they were ready to put 2020 behind them by New Year’s Eve. At about 10 p.m. that night, they took a wood-fired sauna.

“Why did you get dressed again?” Ms. Bredin asked when Mr. Brandon later appeared in a dress shirt and jeans. She was in pajamas on the couch, set to play a board game.

She walked over to him in the reading nook, and got her answer. He dropped to one knee. In his hand was a 3-D printed white acrylate plastic ring, a prototype he designed and had printed at Shapeways, a company in Long Island City, Queens.

“It was sculptural like a lazy stream with stones,” said Mr. Brandon. Ultimately they decided to turn the prototype, with a few redesigns, into their gold wedding bands, and swapped in a more traditional engagement ring they found online.

They chose to wed at the Temple Congregational Church in Temple, N.H., where Ms. Bredin’s parents were married. Since the pandemic imposed travel restrictions from Canada and Northern Ireland, they moved their date from May 2021 to Aug. 7.

Pastor Ken Whitson, a Congregational minister, officiated before 30 vaccinated guests; a toast and dinner followed at the nearby Birchwood Inn. For the after-party, they celebrated outside the farmhouse with fireworks and a red-velvet cake made by their neighbor with an alpaca farm.