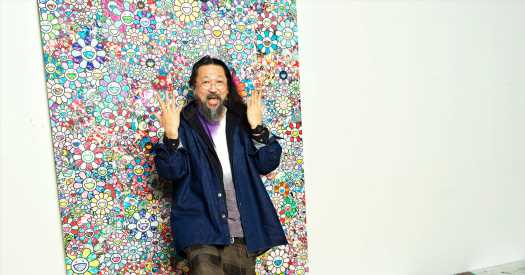 After collaborating on timepieces with brands like Louis Vuitton and Casio G-Shock, the Japanese artist Takashi Murakami wasn’t interested, at least initially, in creating a watch for Hublot.

“It’s a concept I refused many times,” he said in a phone interview. “I thought, ‘I already did that.’”

Last year, however, the brand — which previously created watches with the graphic artist Shepard Fairey and the sculptor Richard Orlinski — persuaded Mr. Murakami to change his mind.

Their partnership produced the Classic Fusion Takashi Murakami All Black, which was unveiled last month at Hublot’s Ginza boutique in Tokyo.

The ceramic watch’s focal point is its 45-millimeter dial, adorned with the artist’s distinctive smiling flower motif, set with 563 black pavé diamonds. The flower’s center is mounted on top of the watch’s sapphire crystal. Its petals are affixed to an oscillating weight that is, in turn, attached to a ball bearing. Like a watch’s rotor, the petals move when the wearer does.

“We discussed it together and he said, ‘I want a living flower that moves, that has an energy,’” recalled Ricardo Guadalupe, Hublot’s chief executive. “From that we had the idea to technically do the flower like a rotor.”

The watch was conceived about a year ago, when Mr. Murakami visited Hublot’s headquarters in Nyon, Switzerland, just before Europe began shutting down to combat the coronavirus. It was there, the artist said, that he began “understanding that it was possible to make something original.”

Mr. Murakami’s work is often buoyantly colorful (just look at the limited-edition Perrier bottles and cans introduced last fall). But he felt that the watch should be black, the color he said he strongly associated with the Hublot brand. And working on the watch as the Black Lives Matter movement was growing — and as he was creating a series of prints to raise money for related organizations — was “a very nice coincidence,” he said.

For luxury brands, collaborations with artists like Mr. Murakami continue to have marketing appeal. “Suddenly Hublot becomes a whole lot cooler because of that association,” said Dipanjan Chatterjee, a vice president and principal analyst for Forrester Research. “It has a transitive property.”

The choice of an artist from Japan would have been strategic, too: Hublot would not specify sales, but said the country was among its top three markets. It has boutiques in four cities, and its watches are available at about 600 points of sale there.

The 200-piece limited edition watch, which retails for $27,300, debuted at Hublot’s Japanese boutiques in late January and is to be available in the brand’s other boutiques worldwide next month. (Mr. Guadalupe said a women’s watch was a possibility, too.)

For Mr. Murakami, whose artwork has adorned everything from balloons in the Macy’s Thanksgiving Day Parade to the Google home page, collaborations have become a continual expression of the blend of fine art and pop culture that two decades ago he named Superflat.

“It’s kind of baked into his DNA to continue to keep crossing over into these different areas,” said Michael Darling, who was, until recently, chief curator of the Museum of Contemporary Art Chicago, where he put together a large Murakami exhibition in 2017.

There’s an additional link between Mr. Murakami’s work and the manufacturing of luxury watches, Mr. Darling said: “His quality control of the paintings that come out of his studio is just out of this world, so for him to be able to work with a watchmaker that also has incredibly high standards feels really consistent with how he likes to approach his work.”