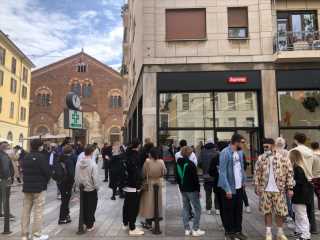 MILAN — About 150 cool kids in their teens and 20s gathered outside the Supreme store in Milan Thursday morning ahead of the official opening at 11 a.m. CET sharp.

A sample of Italy’s streetwear community, many wearing their Nike x Sacai and Air Jordans sneakers, holding skateboards in their hands and clad in at least one Supreme item, flooded the small square adjoining the store on Corso Garibaldi 20.

Not everybody was actually able to enter the store. Due in part to COVID-19-related containment measures, shoppers were required to enter a raffle online to secure a chance to shop, but this didn’t prevent brand enthusiasts from congregating in the surrounding streets and bars to witness the opening event.

One man in his 30s, who goes by the nickname Yazou, was traveling in Milan and was among those who didn’t win the raffle but stopped by anyway.

“I was hoping to buy the Box logo T-shirt this time. I’m no longer buying that many Supreme pieces to be honest because I think the soul of the brand has vanished a bit,” he offered, clad in floral Supreme trousers crafted from a vintage Ralph Lauren fabric. “Back in 2016 when they opened in Paris, it was still cool with all the artists’ collabs, but then it turned into a brand for rich kids.”

Francesco Marchi, a 21-year-old law student, was hoping to buy the T-shirt, describing it as the most collectible piece. “Since I discovered the brand in 2014 in New York I’ve been buying something every year, I wear them a lot but also know that they have a value in the secondary market,” he said.

When 27-year-old Andrea Fraschi, a Milan-based architect that was the first to make a purchase at the store on Thursday morning, came out, his shopping bags filled with Supreme items, a large crowd gathered around him to take pictures as he proudly showed off the T-shirt.

By mid-afternoon, the T-shirt was available on popular resale platform StockX for $468. It originally retailed for 44 euros, or $53 at current exchange rates. 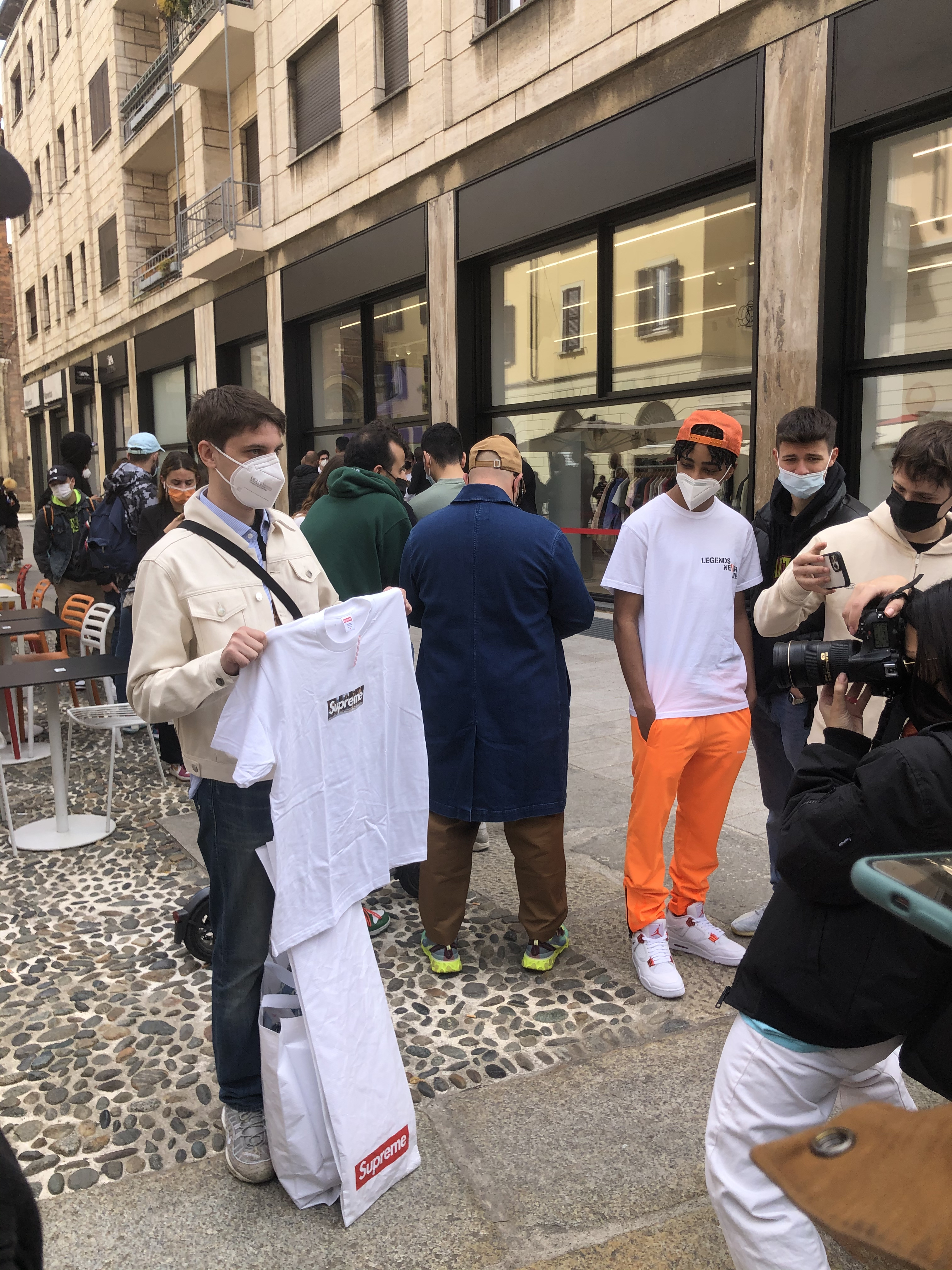 “I’ve been collecting Supreme stuff since 2013, around the time when I started developing a passion for the streetwear scene, graffiti art and the brand, of course,” Fraschi told WWD. He added it’s always hard to buy online as pieces fly off immediately so whenever he has a chance, he stops by the brand’s retail units worldwide to scoop up a new piece. This time he took home a denim suit in addition to the T-shirt and a skateboard deck — although he has never practiced skateboarding.

Zheng Xin, a Chinese art student in Turin, traveled all the way to Milan to buy some hoodies, but she said she’s not really into the traditional logoed pieces. “I’ve started collecting Supreme only two years ago, but I’m really drawn to their easy flair, it’s very fashionable but laid-back,” she said.

The Milan unit is only the second store Supreme opens in continental Europe, after Paris, which was unveiled in 2016. The brand also operates a door in London’s Soho, in addition to flagships in the U.S. and Japan. 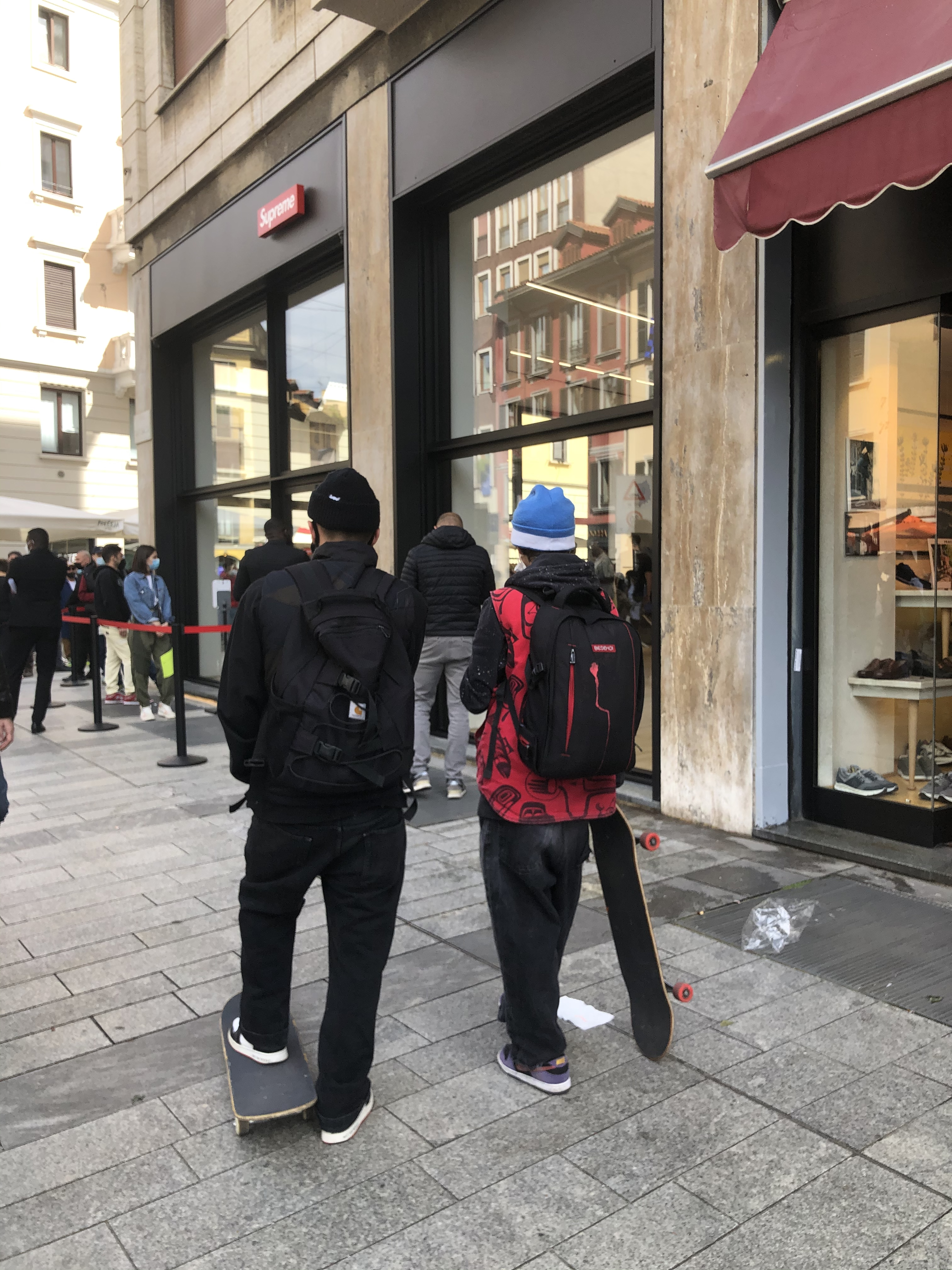 The scene at the Supreme’s Milan store’s opening on May 6. Martino Carrera/WWD

The brand has been at the center of a trademark dispute in Italy over the past few years with local counterfeiters. In 2019, Italy’s Corte di Cassazione, the country’s equivalent of the Supreme Court, ruled in favor of New York’s Supreme.

Who Is the Next Supreme?