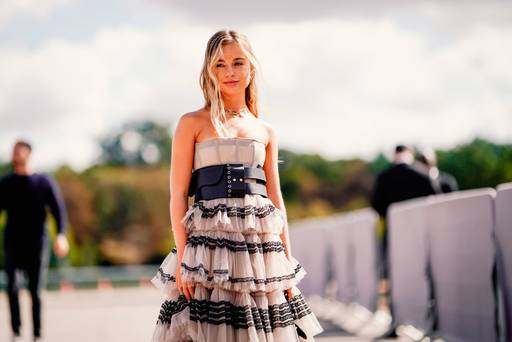 After 16 days of show-stopping high fashion looks mixed with ASOS maternity dresses, Meghan Markle’s tour de couture Down Under is officially over.

It’s likely that Meghan and Harry will be taking a break from the spotlight for at least a few weeks to recover from the intensive schedule of their first major royal tour (their two-day trip to Dublin over the summer is nothing compared to this endurance test), which means that there will be a gap in our fashion news consumption and our Instagram feeds. So, we tracked down some of our favourite royals from around the world who deliver every time and should quench your desire for style stalking – for now, at least. What you need to know: Sweden’s Princess Sofia has been married to Prince Carl Philip for the last three years and has transformed from her past life as a reality tv star and glamour model, who once posed topless with a boa constrictor, into an elegant style icon and impeccably dressed mother-of-two. They also seem impossibly charming, recently opening their formerly private – and personal – Instagram account to the public, filled with adorable photos of their young family.

Style highlights: It’s rare that Sofia takes even a step wrong with her wardrobe choices, but she truly knocks it out of the park with her state dinner attire – and we get the added bonus of a tiara!

What you need to know: The former journalist, who, like Meghan, had her own struggles of acceptance within the Spanish royal family due to a divorce, wed then-Prince Felipe in 2004. The couple ascended the throne in 2014 and Letizia remains one of the world’s busiest royals, working nearly seven days a week attending various different events championing her personal causes.

Style highlights: Her workwear wardrobe is the dream for anyone in a corporate setting: a spectacle of pencil dresses, tailored jackets and cigarette trousers. And she takes any chance to show off her impossibly toned arms. What you need to know: Greece’s monarchy may have been abolished in 1973, but the members’ ability to retain their titles is enough to guarantee front row seats at international fashion weeks and serious celebrity status. Olympia, at 22, is an ‘it’ girl living in New York City, where she was born and raised.

Style highlights: Her Instagram feed is an influencer’s dream aesthetic, with professional shots of her leaving Princess Beatrice’s wedding in Windsor earlier this month, alongside bikini clad pictures on private yachts. Her life is essentially one giant style highlight. What you need to know: The British tabloids have been trying to make Lady Amelia Windsor happen for a long time, and it looks like it’s finally happenning. The 22-year-old is 28th in line to the British throne and in 2016,  was named the ‘most beautiful member of the royal family’ by Tatler magazine, thanks to her rather obviously stunning features.

Style highlights: She’s trying her hand at modelling and her name has elevated her to certain prestige jobs like walking for Dolce & Gabanna at Milan Fashion Week, but given her young age, she still has years to polish an already near-perfect personal style. What you need to know: Next in line to the Swedish throne, Crown Princess Victoria has had a lifetime to prepare for the role of a lifetime as future queen. She takes her duties very seriously and famously said that she has missed a number of important events in her children’s lives because Sweden comes first. Her children Princess Estelle (six) and Prince Oscar (two), whom she shares with husband Prince Daniel, are scene stealers at any family event.

Style highlights: Victoria has mastered the art of the day dress, showcasing an impressive mix of floral shift dresses (without looking frumpy). What you need to know: She’s a former marketing executive who met husband Crown Prince Frederik in her native Sydney in 2000. It was love at first sight and within a year, she had moved to Copenhagen to learn Danish and acclimate to royal life.

Style highlights: It’s often written that Kate Middleton and Mary have similar taste, but Mary is more of a risk-taker, unafraid to step away from traditional attire in favour of something fresh and youthful – i.e., this floaty dress she wore the Copenhagen Fashion Week in August. What you need to know: King Willem-Alexander wed Argentinian financial sales director Máxima Zorreguieta Cerruti in 2002 after initially meeting in 1999 in Seville and the rest is history. She is a bonafide Instagram style star thanks to her colourful combinations and while her personal life has been marred by tragedy in recent years, she has always put on a brave face.

Style highlights: Máxima loves a piece of headwear, whether it be a beret, a fascinator, a hairband, she doesn’t discriminate, once it’s big and bold like her personaity. During her recent trip to the UK, she chose a piece by Irish designer Philip Treacy, so here’s hoping we get more designs from our little island. What you need to know: Mette-Marit’s rise to royalty is a fascinating one as she was a single mother when she met now-husband Crown Prince Haakon in 2001, when she was working as a waitress and charmed the Norwegian public before long. Most recently, she announced that she was diagnosed with life-limiting condition chronic pulmonary fibrosis, in addition to vertigo.

Style highlights: Despite the tiaras and sleek dresses for official royal business, this woman knows how to do casual. It’s clear that she never forgot her normal roots and always prefers basics over fussy details and over-accessorised outfits.

What you need to know: Jordan’s Queen Consort Rania is often regarded as one of the best dressed women in the world, praised for her dedication to philanthropy and advocacy for education and children through work with UNICEF. Not to mention she’s on the board of directors of several international organizations such as the World Economic Forum (WEF); the United Nations Foundation (UNF); and International Youth Foundation (IYF).

Style highlights: She has a power wardrobe to beat the band and thanks to her Instagram account, she’s arguably one of the most influential street style stars around – at least Vogue thinks so. What you need to know: Princess Charlene will always remain a fascination not only because of her past as an Olympic swimmer representing South Africa or her statuesque appearance, but the ‘runaway bride’ narrative in the run-up to her 2011 wedding to Prince Albert that they’ve never been able to shake. These days though, the couple do seem genuinely happy together and are parents to four-year-old twins Prince Jacques and Princess Gabriella. What you need to know: The London-born childrenswear designer is Princess Olympia’s mother and has been married to Crown Prince Pavlos, heir apparent to a defunct throne, for 23 years.

Style highlights: She’s also based in the US, which means we get to see her in more of a modern princess role, one sprinkled among Hollywood royalty as she’s pictured above at the Vanity Fair Oscars party.

What you need to know: Beatrice is an Italian journalist who had an established career covering political development before marrying Pierre Casiraghi (his uncle is reigning monarch of Monaco Prince Albert) in 2015. Two years ago, she was appointed a special envoy for human rights for Fashion 4 Development (F4D), an organisation which teamed up with the United Nations to tackle poverty in the developing world.

Style highlights: Beatrice’s style has evolved from laid-back luxe synonymous with old-money in the summer to an increasingly preened royal-in-waiting. Her style has always been flawless, but now designers from around the world are clamouring even more to dress her – and it’s easy to see why.