Peter Wilding, from New Zealand, has advertised himself to potential partners by offering up a number of date "packages". He says he's adopted the unusual approach after missing out on dating as a youngster because of illness. 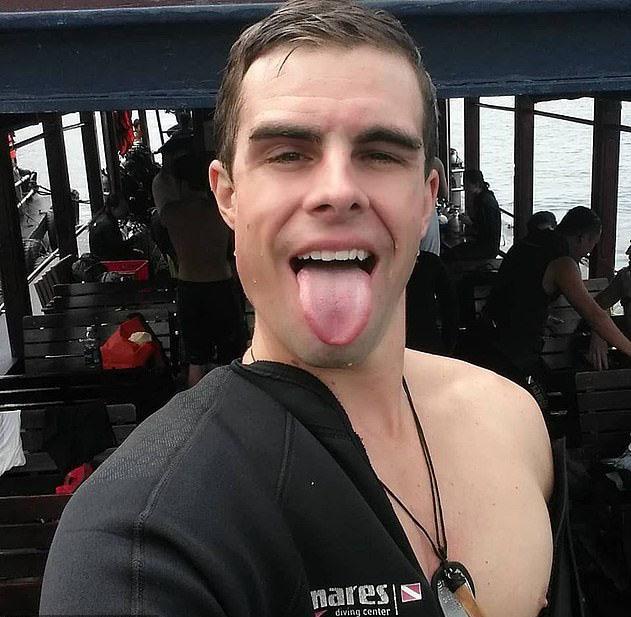 And if you were thinking of applying, his ideal date is a woman aged between 22-36, ideally who owns a small dog.

Peter posted his list of negotiable dates to a local noticeboard in his hometown of Taupo, saying: “Valentine’s Day is 10 days away so it’s time to get booking.”

He lists eight date options to choose from, with two extras thrown in. 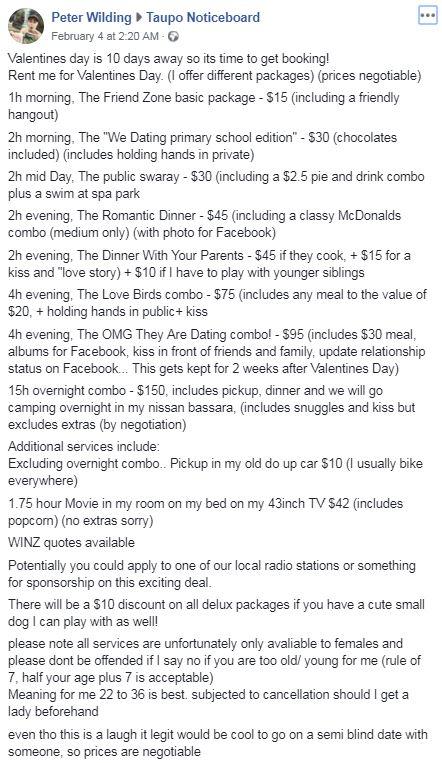 The lowest priced date is the Friend Zone Package, which for £7.81 ($15NZD) includes a friendly hangout for an hour.

Next is the ‘We Dating Primary School Edition’, which for £15.61 ($30NZD) involves holding hands in private.

A Public Swaray with pie and mash and a trip to a spa park, a Romantic Dinner with a “classy” McDonald’s meal, medium, and even Dinner With Your Parents – only if they cook – all feature. 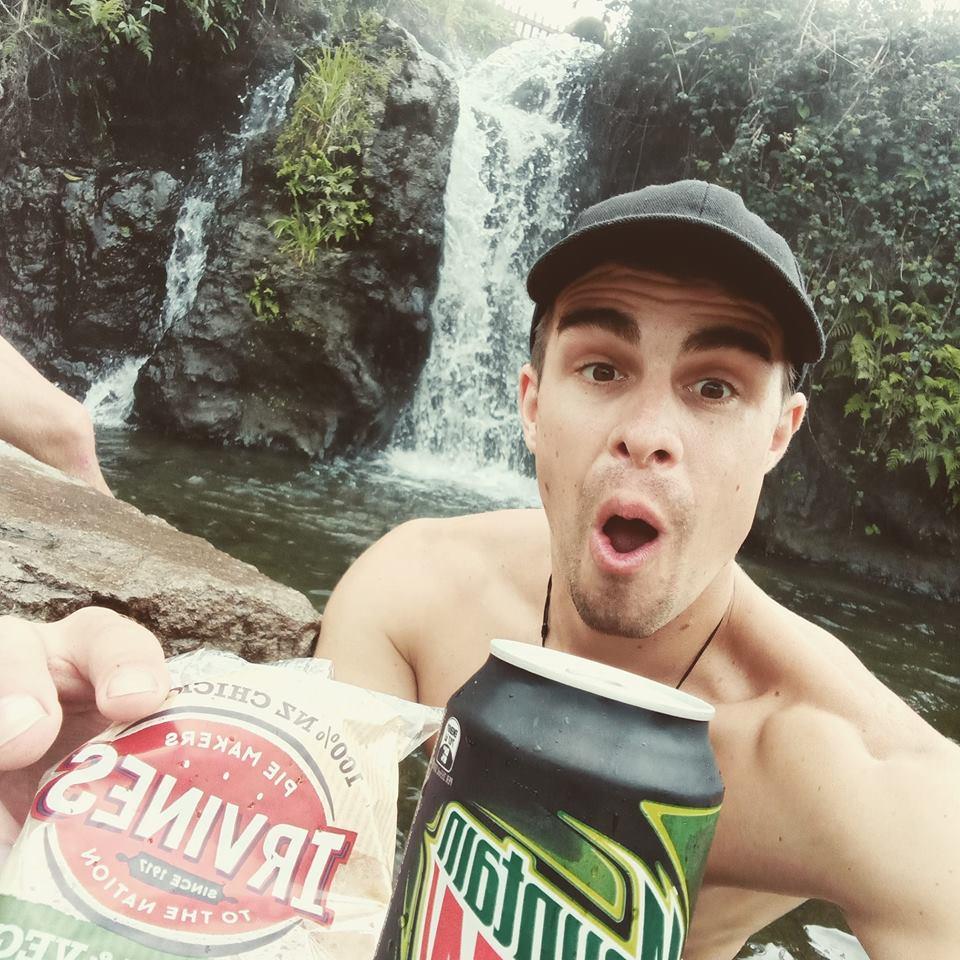 The OMG They Are Dating Combo, £49.44 ($95NZD) includes a lush dinner – up to £15.61 ($30NZD) – albums for social media, a kiss for friends and family, and most importantly a relationship update for Facebook, valid for two weeks.

If that’s not enough, the Overnight Combo, for £78.06 ($150NZD), includes a dinner with no max spend, camping overnight in his Nissan Bassara – plus “snuggles and kiss but excludes extras (by negotiation.)”

There are extras thrown in as well, for a cost, which include pick-up in his “old do-up car” and a movie on his bed – which includes popcorn but no extras, sorry ladies.

Plus if you own a small dog – you get a discount.

Peter said: “There will be a £5.20 ($10NZD) discount on all delux packages if you have a cute small dog I can play with as well. 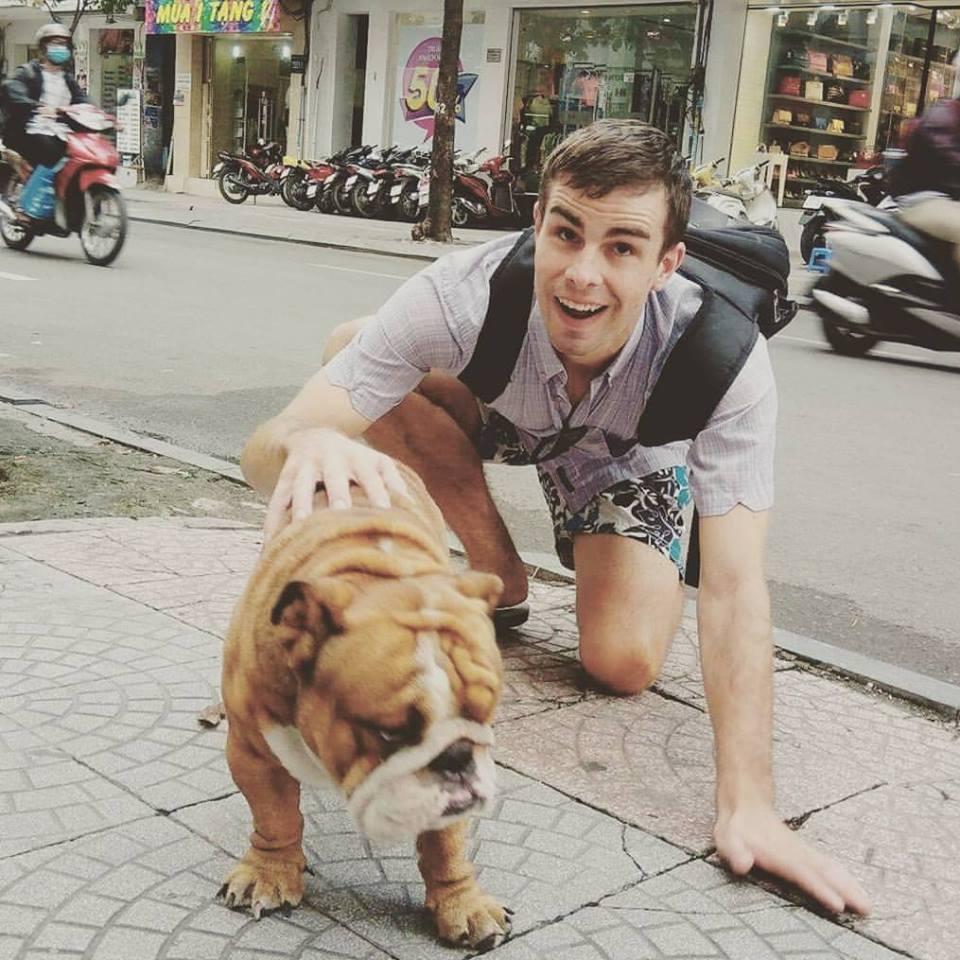 “Potentially you could apply to one of our local radio stations or something for sponsorship on this exciting deal.”

And he ends his post by saying: “Even tho this is a laugh it legit would be cool to go on a semi blind date with someone, so prices are negotiable."

Peter revealed the reason behind his unusual dating approach was because he suffered a brain bleed when he was 12 which almost killed him.

It affected a lot of his long-term memory, meaning he’s not been on the dating scene as much as his peers.

Speaking to Stuff, he said: "The fact that I am alive is insane but the fact that I function like I do is ridiculous, it's miraculous, it’s unheard of.

"I had to relearn everything which wiped me out of the teenage dating scene."

And if women needed any more incentive to date Peter, he said: "I love a good laugh.

“My promise to whoever I am with, if I make you upset, I will always make you laugh afterwards.

"[And] my other greatest asset is, I am told, I have a rocking beach body."

And these are the hottest over 50s in Britain revealed by dating app.

Earlier this week, we told you about the professional bridesmaid who charges £5k and who has revealed her most bizarre requests.