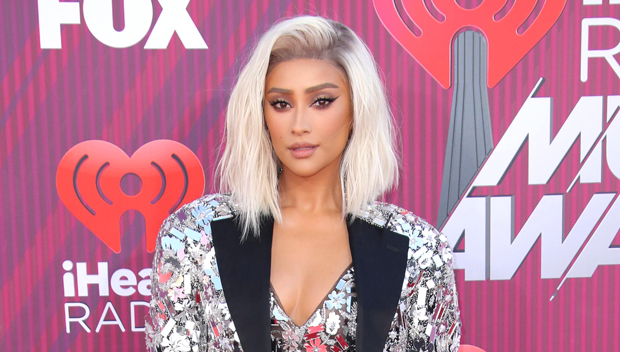 Shay Mitchell showed off her new blonde hair at the iHeartRadio Music Awards on March 14. — And, she debuted a choppy, long bob! The actress rocked a fierce cat eye, which added even more edge to her silver and black mini dress and matching blazer.

Shay Mitchell, 31, is platinum blonde, and she has a bob! The You actress put her new blonde hair on display, and debuted a fresh haircut at the iHeartRadio Music Awards in LA on March 14. Shay hit the red carpet with an edgy, long bob — a complete 180 from her usual super long, brown locks. And, we may love her better with blonde hair! See Shay’s hair makeover, below.

The Pretty Little Liars alum was what we would describe as, head-to-toe perfection while at the sixth annual iHeartRadio Music Awards. She rocked a plunging silver mini dress that could have been used as a mirror because of its shiny, reflective material. Shay wore a matching blazer jacket, which fell longer than her dress, that was outlined in black. She opted for clear heels, which was a good choice so she didn’t take any attention away from her dress and new hair style and color.

The actress initially showed off her blonde hair in a video on Instagram on March 12. The clip showed Shay getting ready with her glam squad, who helped save her from a major wardrobe malfunction when the left strap of her leopard dress became unclipped. “My alter ego Svetlana had a wardrobe malfunction but she wasn’t too concerned about it,” Shay captioned the video, which featured her new blonde hair tied back in a leopard headband. She also showed off new blue contacts.

The iHeartRadio Music Awards featured a ton of music’s hottest stars on the red carpet. Halsey stunned in a menswear-inspired black and white ensemble with a black bowtie. Meanwhile, Kacey Musgraves opted for a layered, forest green dress that looked beautiful with her straight hair.