The £20 event, held by a company called London Prestige in a Liverpool Street All Bar One on Saturday February 16, came with a strict set of "house rules" – sent out just two days before. 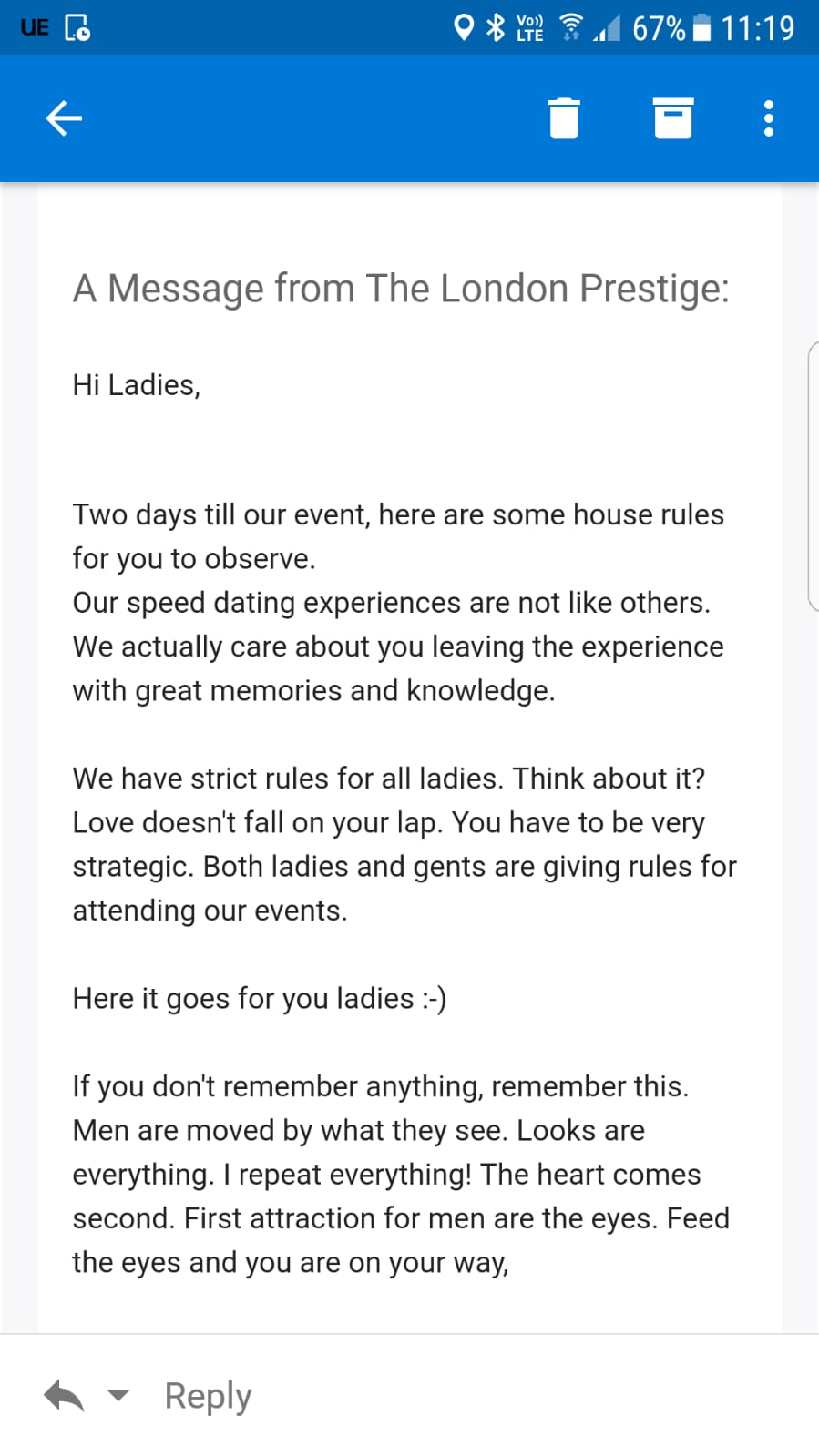 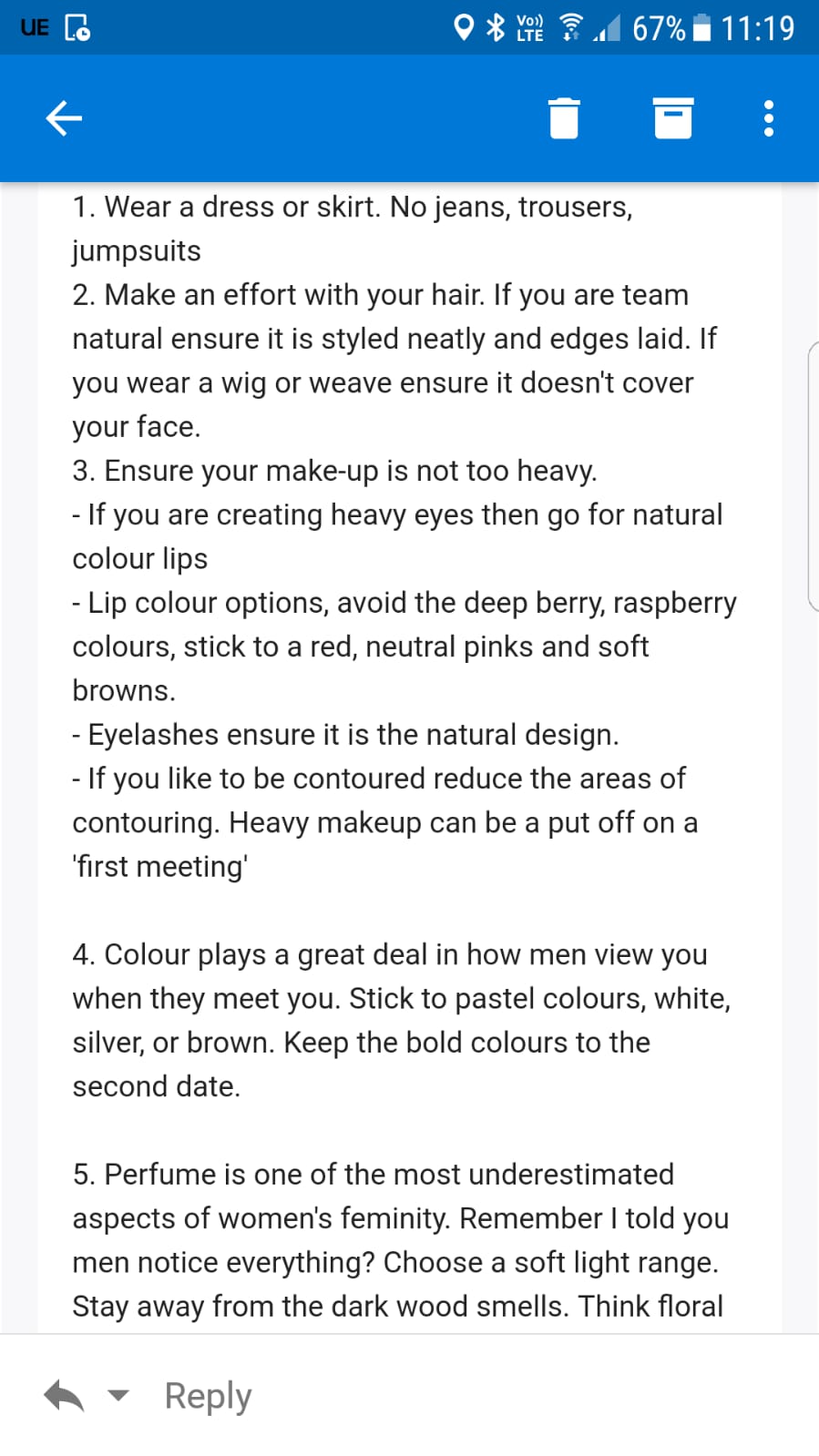 The email was shared with Fabulous Online by horrified Londoner Ekaete – who was dragged along to the 28-40 dating event by a pal.

She told us: "I’ve never been to a speed dating event before but my friend suggested it, and it looked like it was going to be done really well.

"They said there was going to be a two-course meal which never materialised.

"They made it seem like the event was very popular, said they had to move it to a bigger venue, and when we got there there were about seven guys and near on 20 women. 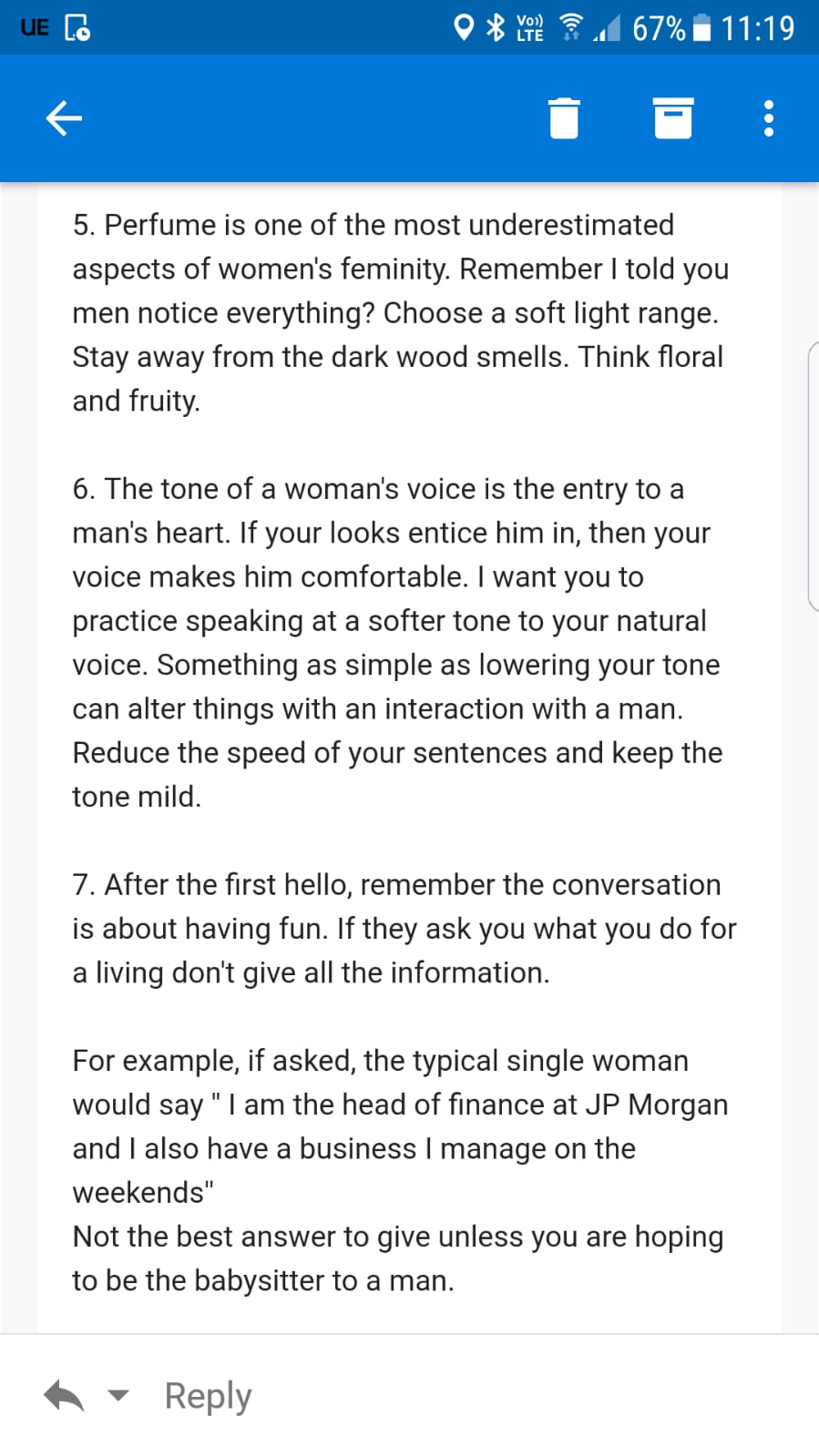 "When we got the email, we weren’t sure if they were being serious or not. It got worse the more you read.

"We did debate if we should go or not, but we'd already bought tickets and it was just two days before, so we thought ‘let’s still go and see’.

"It just all felt ridiculous and sexist. The event was marketed as African professionals living in London.

"But I felt it was a very old fashioned mentality that my grandparents, not even my parents, would have had."

It just all felt ridiculous and sexist – very old fashioned.

The email reads: "We have strict rules for all ladies. You have to be very strategic. Both ladies and gents are giving rules for attending our events.

"If you don't remember anything, remember this. Men are moved by what they see. Looks are everything. I repeat everything! The heart comes second."

They then plunged into the list of rules, which includes wearing dresses only (no jumpsuits or jeans allowed) and demands to "make an effort with your hair". 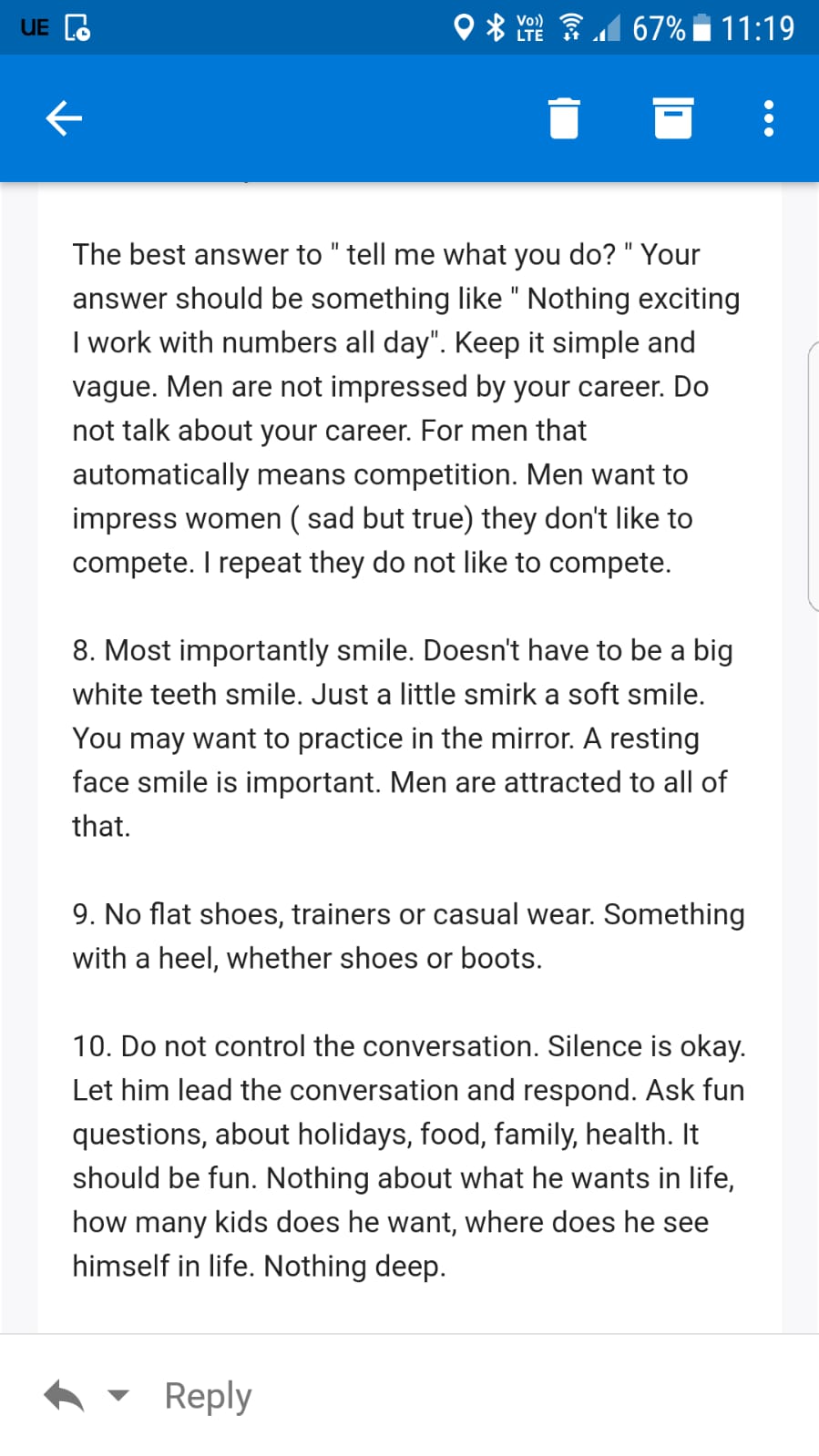 The ladies were also advised to "stick to pastel colours" like white, silver or brown – and "keep bold colours to the second date".

They were told to wear floral perfumes over "dark wood smells" and that they must have high heels on.

While they are reminded "heavy make-up can be a put off" and advised to steer clear of any contouring, false lashes or bold lip colours.

Ekaete said: "They said we were going to be seated and the men would be moving around.

"They changed that on the night, obviously because there were less men, but they told us to wear heels and we were forced to walk around from one to the next.

"For me that was the worst bit, I felt like I was being paraded around.

"It felt stupid going along with it but I already felt self-conscious because it was the first speed dating event I was going to, so I thought ‘OK I’ll just do it’.

"I felt like I was being so weak by following this, but I didn’t want to be judged or stand out because I’m not following this stupid dress code." 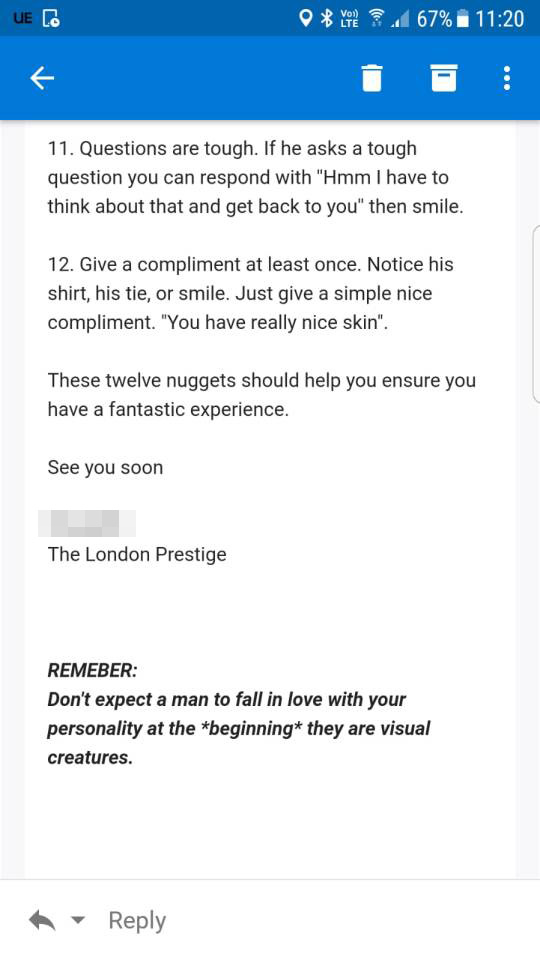 It wasn't just their looks the women were advised on.

They were also told to "practice speaking in a softer tone" and to steer away from boasting about their jobs – even if asked what they do.

In the case of someone having a high powered job as the Head of Finance at JP Morgan, the email advises: "Your answer should be something like 'Nothing exciting I work with numbers all day'.

"Keep it simple and vague. Men are not impressed by your career.

"For men that automatically means competition. Men want to impress women (sad but true) they don't like to compete."

Ekaete was horrified when she was told to "dumb down" her profession, saying: "For me career is such a talking point normally.

"But it was like ‘don’t talk about it, lower your voice tone, wear a dress’, to me it’s just ridiculous.

"They were asking us to dumb ourselves down. It was like ‘play stupid and stroke their egos’.

"Even giving advice on the day, they said as women it’s important to let men lead, and we’re the prize. It was just surreal."

They were asking us to dumb ourselves down. It was like ‘play stupid and stroke their egos’

The women were also advised to "practice (their smiles) in the mirror" and give at least one compliment on each of their five-minute dates.

"Questions are tough. If he asks a tough question you can respond with 'Hmm I have to think about that and get back to you' then smile."

Ekaete's friend has complained and was offered free credits to another London Prestige event, but isn't interested in giving them a second shot.

Perhaps unsurprisingly, neither of the ladies found love that night.