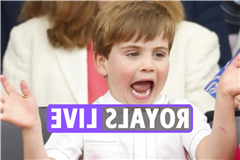 PRINCE Louis has been compared to the Queen as the royal duo do not always "take themselves too seriously" according to a body language expert.

During The Queen's Platinum Jubilee, Prince Louis managed to find a way to steal the show as he "adores being the centre of everyone’s attention".

Body language expert, Judi James, has said that Louis is quite the ‘entertainer’.

Judi continued: “Louis is clearly the one who adores being the centre of everyone’s attention and the one who loves to entertain and make his family laugh.

"His spontaneity is obvious but so is his popularity and his sociability as he was the one engaging with everyone and even lap-surfing to get cuddles from everyone.

“His signals suggest he will be the royal optimist and the one most likely to encourage change in the Firm as well as ensuring his siblings enjoy their roles by, like the Queen, not always taking themselves too seriously."

Read our Royal Family blog below for the latest updates…