Business in the front, and party in the back! Rihanna revealed the final cut from her Savage X Fenty Show Vol. 3 on Sept. 20.

Rihanna, 33 set social media ablaze on Sept. 20, when she posted a series of photos to promote the third installment of the Savage X Fenty Show. Wearing a silver frock, which left little to the imagination, the singer looked absolutely stunning in photos posted on Instagram.

RiRi looked ravishing in a sheer, sparkling silver frock, which dipped low enough to reveal her under-breast tattoo. The eye-catching piece had a low back which showcased her toned physique and a matching thong. Wearing a choppy mullet-like hairdo, the singer captioned the pics, “my mood after handing in the final cut of the @savagexfenty show to @amazonprimevideo September 24th #VOL3,” alongside a handful of emojis.

Fans instantly sounded off in the comments to discuss the promo. “Well damn sis. Show us how u really feel,” alongside a few fire emojis. One fan even commented, “Took us several days to recover from vol. 1 and vol. 2 just imagine VOL. 3.” The upcoming third installment of the singer’s lingerie fashion show with Amazon Prime Video premieres on September 24 and will feature performances from Nas, Daddy Yankee, BIA, Jazmine Sullivan, Ricky Martin, Normani, and Jade Novah.

This isn’t the first time the star has promoted her lingerie line on her social media platforms. On August 26 the “Umbrella” singer took to the gram once more to tease a look for her fashion show, but this time a sequin blue mini dress and matching thong which put her derrière on full display. 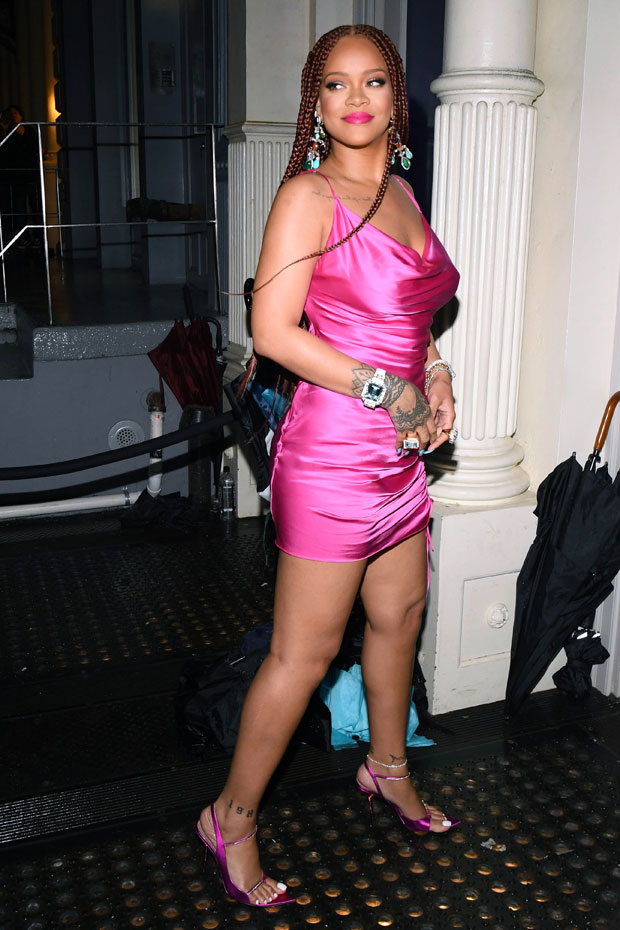 The upcoming fashion line is described as a “celebration of body and movement.” The collection will feature bras, underwear, and other pieces of lingerie that range in inclusive sizes; and, per the press release, it will feature “strong lines that trace contours of the body and unconventional silhouettes that push the boundaries of individuality to bring out the baddie in everyBODY.”

When she isn’t taking over our socials, building an empire, she is spending time with her beau, A$AP Rocky, 33. Since taking their relationship public, the lovebirds have been inseparable and might have marriage on the brain. A source told Us Weekly on Thursday, August 26th, that an engagement could be “in the works.” The source told the outlet, “These two are so madly in love, and it’s true there’s a lot of buzz in their circle about an engagement being in the works.”

“Going by the hints Rocky’s been dropping, [it] may well happen soon, but there’s no pressure and what matters most to both of them is to keep building on this truly beautiful thing they’ve got going,” the source continued, adding of their connection: “They’re very open with friends that it’s unlike any connection they’ve ever experienced with anyone else and they see each other as life partners.”