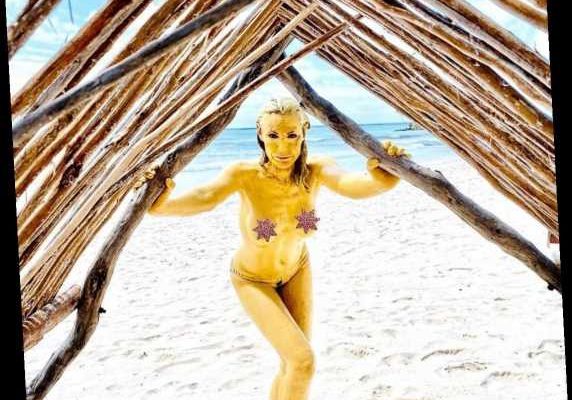 Luann de Lesseps is soaking up the sun.

The Real Housewives of New York City star showed off her toned bod in a racy snapshot on Monday, wearing a bikini bottom and no top for a beach photoshoot.

Leaning slightly forward while posing on the sand, the 55-year-old sported a face of clay as she held on to a wooden structure.

"Claycation 🤩🏝," she wrote in the caption. Luann de Lesseps Says She Wants to Compete on Dancing with the Stars: "I Love a Challenge"

The topless photo is the latest de Lesseps has shared from her tropical retreat, including an image of herself seated on an oversized swing under a sign reading, "COLD COCONUTS / COCOS FRIOS."

Earlier on Monday, she posted a stunning sunrise video to her Instagram Story, in which the sounds of the ocean waves could be heard along the shoreline.

That evening, de Lesseps shared footage from a "so romantic" dinner setup right by the way: a table and two chairs, surrounded by candles arranged in the shape of a heart.

While de Lesseps did not tag any of her co-travelers, back in November, she confirmed that she had begun dating Hamptons trainer Garth Wakeford.

De Lesseps was recently under fire as a result of claims that she put production of RHONY in jeopardy after she was photographed attending an indoor party in Coral Gables, Florida, amid the ongoing coronavirus pandemic.

In several photos from the January bash, de Lesseps was seen without a protective face mask. But the reality star told Page Six that all guests were required to provide a negative COVID-19 test before entering the party.

"I took the mask off for some photos," she told the outlet. "Knowing everyone had tested negative, I felt comfortable doing that."

De Lesseps' behavior came into question after RHONY's production was forced to shut down for a second time earlier that month. A source told PEOPLE at the time that a cast member had tested positive for the virus.