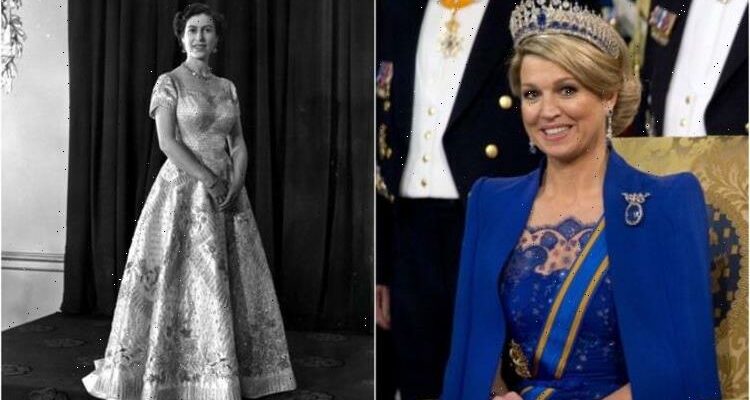 For the inauguration of her husband, King Willem-Alexander of the Netherlands, Queen Maxima looked truly majestic from tiara to toe. Maxima wore sensational diamonds and gorgeous sapphires for the royal ceremony in April 2013, and nearly a decade later it is still remembered as one of the best Coronation looks of all time.

For the official inauguration ceremony at the Nieuwe Kerk in Amsterdam, Queen Maxima arrived wearing a spectacular royal blue gown topped by a ‘dramatic’ cape according to the Court Jeweller.

The ensemble was made by one of Maxima’s favourite designers, Jan Taminiau.

The shade of blue used in the gown, cape, and shoes coordinated perfectly with the blue and orange sash of Queen Maxima’s highest Dutch order, the Order of the Netherlands Lion.

The star of the order was pinned to the gown just above her waist.

The colour of the gown also matched perfectly with the bright blue royal sapphires that Maxima wore.

She debuted one of the grandest tiaras from the royal collection, the Dutch Sapphire Parure Tiara, for the occasion.

The tiara was made for Queen Emma of the Netherlands in 1881, and it is part of a larger set of matching sapphire jewels.

Maxima actually wore a slightly smaller setting of the tiara, with part of the top element lowered.

She paired the tiara with even more fantastic sapphire jewels from the Dutch royal vaults.

Maxima wore the Dutch Diamond Cluster and Sapphire Drop Earrings, which were made from Queen Wilhelmina’s dismantled sapphire tiara.

On her cape, Maxima pinned another Dutch royal treasure, a large sapphire and diamond cluster.

On this occasion, she used one of the family’s diamond bow brooches with the cluster, wearing it as a pendant.

The overall effect on the new Queen’s outfit was incredible and royal fans are still mesmerised.

One Twitter fan wrote: “Astonishing: absolutely perfect for her debut as the Queen of the Netherlands!”

In comparison to Queen Maxima’s Coronation jewels in 2013, on Queen Elizabeth’s Coronation Day on June 2, 1953, she wore comparatively few jewels.

This allowed the Coronation necklace and earrings to take centre stage.

In a picture taken on the balcony of Buckingham Palace after the ceremony, the Queen can be seen wearing her Coronation Armills, as well as the Sovereign’s Ring and the Imperial State Crown.

The necklace and earrings have remained firm favourites of the Queen, who has worn them for formal occasions throughout her reign.

Though she often wears them as a matched set, she has also mixed them with other jewels on occasion.

Her Coronation Dress was designed by Sir Norman Hartnell and was cream and gold in colour, a more subtle, understated choice compared to Queen Maxima’s dashing royal blue.