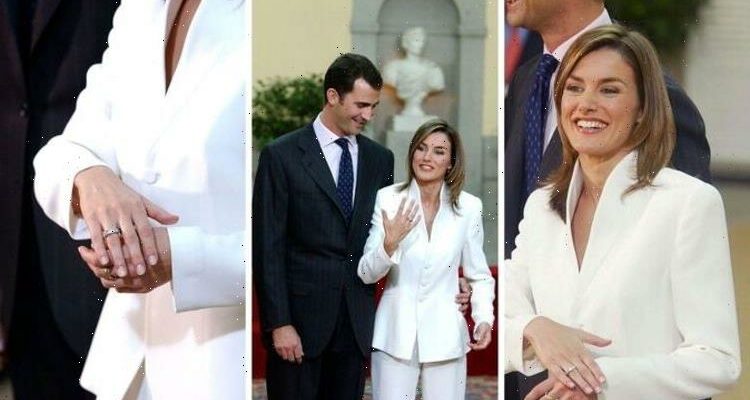 Queen Letizia married King Felipe VI in 2004. The 49-year-old monarch was given a beautiful diamond ring but hasn’t been spotted in it since her wedding day.

It is a simplistic and simple ring, but this does not mean it wasn’t costly.

In fact, the royal engagement ring was valued at a whopping £35,000.

“The diamonds in this ring are of exceptional colour and clarity and worth in excess of £35,000.”

Compared to some rings in the UK Royal Family however, this ring is rather modest.

They estimated that it would be worth as much as £500,000 as the years go by, “thanks to the ring’s history and legacy”.

Queen Elizabeth II’s engagement ring is far from cheap, valued at £207,000, followed by Meghan Markle’s which is estimated to cost £120,000.

Yet, the Spanish monarch’s ring is classic and timeless.

The unique piece of jewellery was crafted by Suárez jewellery, a Spanish brand established in 1943.

Queen Letizia’s ring is unusual compared to some other royal engagement rings, as it does not have a central, supersized stone.

For this reason, it resembles an eternity ring more so than a traditional royal engagement ring.

Indeed, when Princess Diana wore it, the young Prince Harry complained that the ring hurt him when he held his mother’s hand.

When Harry asked if he could keep Diana’s ring after her tragic passing, the Princess’ former butler Paul Burrell recalled him saying: “I remember when I held mummy’s hand when I was a small boy and that ring always hurt me because it was so big.”

But why doesn’t Queen Letizia wear her beautiful ring?

Reportedly, the Queen decided to forgo wearing the jewel because “the continuous handshakes at the receptions had injured her hand”.

However, there are also rumours that King Felipe sent his brother in law, Iñaki Urdangarin, to collect the engagement ring.

Following his imprisonment for embezzlement and tax fraud, some speculate that Queen Letizia opted against wearing it because of its connection to him.