She accessorised with a black hat, complete with some black netting.

A full veil is very much a staple for state funerals, and when the previous monarch, King George VI, passed away, Queen Elizabeth and the Queen Mother both wore them.

However, Camilla appeared to update a more archaic tradition with a more subtle headdress. 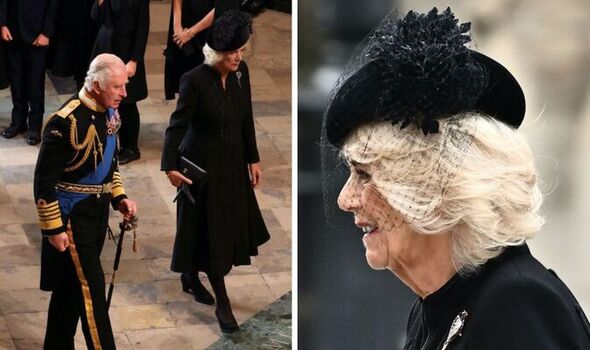 The Queen Consort accessorised with the Hesse Diamond Jubilee Brooch.

The exquisite jewel is comprised of a heart shape, and inside this the number 60, which signifies 60 years of the Queen’s reign.

However, it was not believed to be worn by Queen Elizabeth II, only by Camilla post-2005.

She has made several appearances wearing it, including a visit to Philadelphia in January 2007 and in Tokyo the following year.

As for other accessories, Camilla carried a patent black bag in one hand.

She wore a pair of opaque black tights, as is customary for royals.

She also wore a pair of black shoes which appear to be in suede.

The funeral dress codes for royals are as expected, sombre, with women wearing black dresses and men, black suits.

Business of Fashion revealed that hats are “de rigueur”, meaning according to strict etiquette, and almost mandatory for the occasion.

Stephen Jones, a London-based milliner (someone who makes or sells women’s hats), revealed that the death of the Queen prompted an onslaught of orders.

He stated: “What I feel is most suitable is simplicity both in silhouette and in texture.

“Naturally a veil also is part of mourning so many of our simple black hats were re-trimmed with short veils.

“I feel this is little to do with fashion and more about being respectful and appropriately dressed.”

As for the clothes themselves, it would not be customary for royals to wear anything outlandish.

Because today’s service is of a sombre nature, senior royals who are often under fashion scrutiny will not wish to draw too much attention to themselves.

Camilla has adhered to this by wearing a very minimal look as a sign of respect for the late monarch.