The fantasy repeats. I am in a crowd, nodding but only half listening to the conversation. The liquid in my glass has warmed to an unappealing temperature. My feet hurt from impractical shoes — maybe heels, maybe some kind of heavy, embellished boot. I wave across the room at an acquaintance, and my stacks of bracelets bang against one another, distracting me momentarily from the pinching of an elaborately engineered strapless bra that I will pre-emptively unhook in the taxi home.

How I long for such discomfort.

The torture devices of fashion, previously demonized as tools to disempower women (cocktail dresses, corsets, pantyhose, awkwardly sized handbags), have taken on a whole new cast in the pandemic, while the comfort clothes lauded as their better replacements (tracksuits, flats) are now synonymous with being stuck at home: limited, constrained. It is increasingly apparent that the moral ratings we attach to clothing derive from associations.

Heels — or, say, waddle-inducing pencil skirts — were only constricting when one could rightly argue that woman were pressured into wearing them, when there was the suggestion of a lack of choice. What happens to that theory when the option to wear them is basically gone? And when the thirst to put them on appears on its own, uninfluenced by gaze or occasion, on a quiet Tuesday morning, while eating leftover takeout by the fridge between video calls? Locked down, we can appreciate what makes us feel free: what we want, what we miss.

Sometimes, it turns out, that is complex, troublesome fashion. Clothing that makes us feel something, even if it’s discomfort.

“I want big earrings,” Charlotte Goodhart, a British communications executive, said over WhatsApp recently. “Where your lobes end up puffy and sore. Cheap metal hoops, which I’ll taken off on the way home and hook together in my bag.”

“Imagine having a bit of your body exposed, a crop top — the cold air on the small of my back,” she went on effusively, like someone sexting a new partner. “When I was a teenager and I wore a crop top, if it was a bit cold, my dad would always say, ‘Oh your poor kidneys.’ I yearn for a frozen kidney.” 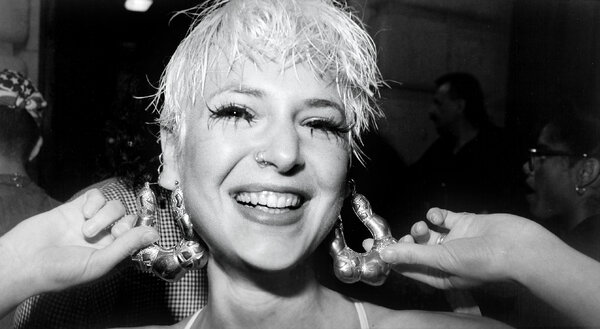 I told her I missed that awkward moment of performative chivalry, when at the end of dinner, someone, maybe a waiter, maybe a date, locates my coat and holds it up behind me, armholes ready — the awkward, degrading contortions I’d pull trying to get the second arm in. I used to hate that. Now, I can imagine breath on my neck. A touch on my shoulder. The sense of attainment that comes with an evening out.

We spoke of the rituals of getting ready, going out and then of coming home and peeling off the layers: our ankles tender, red lines marking out where our underwear had cut into flesh, aware of our bodies in a way that felt not exactly pleasant, but at least like we existed.

Sophie Mackintosh, a novelist, has been reminiscing in this vein, dreaming of peeling cleavage tape, bunched-up spandex or a breast accidentally spilling loose from a top in public. “Like you’ve made yourself into a glamorous creature through witchcraft, and it could fall apart, but you are very much in your body in a way I don’t feel in joggers,” she said.

She recalled traveling home by train from a party in new thigh-high stockings held up by silicone. “By the end of my journey they had fallen down, and I had to tuck them gracefully into my boots like socks,” she said. “It was embarrassing but also the opportunity for adventure and misadventure with clothes, when now they are very safe.”

There is something affirming, a message about possibility, in the small hazards and uncertainties that can come with clothing and the way it intersects with social life. To have ruined a dress, or broken a heel, is to have moved, to have tried. Such minor, pleasurable discomforts may be a way to retrospectively offset the giant, all-encompassing insecurities we are living through now, in our sweats.

“I want sequins, I want painful beauty treatments, I want lamé,” the writer Lauren Collins said wistfully. Ms Collins, who lives in Paris, described the urge to wear something fragile, or easily stained. Now the preciousness might feel exciting, rather than hampering or time-consuming. Such fabrics come with the memories of trips to the dry cleaner, maybe on the way to work, or between appointments. They have connotations of packed schedules and quick dashes, the mundane freedoms many of us have now come to prize.

“The other day I had a Zoom thing, and I put on an orange taffeta blouse,” Ms. Collins said. “Not that anyone on the other end cares, at all. But I used fabric to demarcate my work day from the endless cycle of cooking and cleaning and child care. I was like: ‘I’m wearing a stainable fabric. I can’t unload the dishwasher right now.’ I was excited!”

Around the time France moved its curfew from 8 p.m. to 6 p.m. to stem swelling COVID cases, Ms. Collins found herself buying a pair of silver trousers: cropped, shiny, with a slight kick flare. “I never wore silver pants around my house before,” she said. “But they somehow help to cordon off time. I think that maybe when everything is such a blur, wearing exaggerated clothes is a way to give structure.”

Designers have argued for years, while peddling the sexy or the tricksy, that one should dress for oneself; now quarantine has decided the case. “Why else am I making an effort?” Ms. Collins asked, noting that she had worn perfume and makeup each day of the pandemic. “Why else am I wearing my silver pants around my lonely apartment?”

If this energy extends to when we emerge from confinement, it will make for great viewing. The streets will be filled with “looks” put together without fear or self-consciousness. Overdressing will be rampant.

Of course, the option to peacock will also be a novelty. “It’s almost weirdly like being at school, when you are forced to always wear the same thing,” Ms. Goodhart said. “Do you remember nonuniform day? People would go mad,”

Yet Rena Hume, who is 91 and a former teacher from Glasgow, worries that it may be too late. During lockdown, she got rid of much of her evening wear. “When will I wear smart shoes?” she asked. “It’s the same slippers, the same sneakers, each day. Just putting on a mask and hurrying home again.”

“When I was a teacher, I made the point of wearing something different every day,” Ms. Hume continued. “I just thought, the kids have nothing to do but look at me, so the best thing I can do is make it easy for them.”

She has never been a “lady who lunches,” she said. She doesn’t miss showing off. But she does miss her rings (“I like giant ones”) and sparkling earrings, the ones that tug ever so slightly when you move your head, the ones that became a signature with her students.

“They’d look out to see which pair I had on each day,” she said.

The other day, she opened her jewelry drawer and surveyed them all, her favorites, and wondered if the time for such choices would come again.