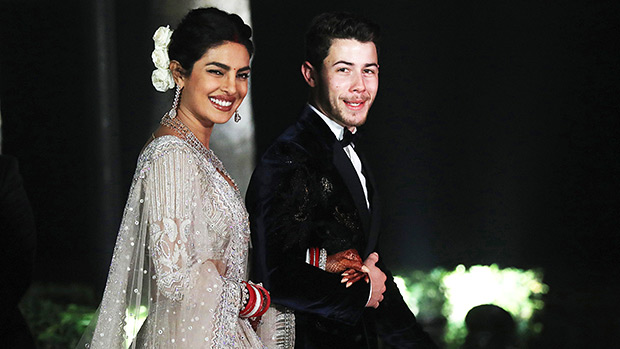 Priyanka Chopra and Nick Jonas have released photos from their five-day wedding extravaganza in India. While all of her gowns and sari’s were beyond gorgeous, it was her massive 75-foot long tulle veil that has fans talking. It was so large it needed a team of men to carry it behind her and the aerial photos of it show just how huge and dramatic it was. She wore it while her mother walked her down the aisle for the couple’s Nov. 30 Christian wedding ceremony and the 36-year-old Quantico actress went totally extra when it came to her veil and fans are loving her for it.

“May your bank balance in 2019 be as extra as Priyanka’s veil,” one fan joked on Twitter while another wrote, “im pissed priyanka stole nick from me, but I’m proud she did it in the most extra way possible.” One fan was awestruck with the look, tweeting “This veil of Priyanka Chopra’ gown is 75 FOOT LONG. THIS IS JUST SURREAL. I mean, WOW!” while another laughed “priyanka’s veil is bigger than my future.”

The veil was so massive the veil needed a team of six men — three on either side spread apart by about 20 feet each — just to get it gown the aisle. Her gown was just as stunning, as she wore a custom Ralph Lauren white dress with 135 buttons down the front, a scallop collar and two million mother of pearl sequins. She shared the dramatic video of her walking down the aisle with her never-ending veil trailing behind her and Nick was so moved when he saw her he had to wipe a tear of emotion from his eye.

Priyanka captioned the tweet feauring the video “Once upon a fairytale” and she got the absolute wedding of her dreams. The Bollywood superstar was definitely going to go all out for her wedding ceremonies, but her Western one was definitely the most over the top. For the couple’s Hindu wedding, Priyanka went for a colorful red bejeweled and sequined lehenga from Indian designer Sabyasachi Mukherji.