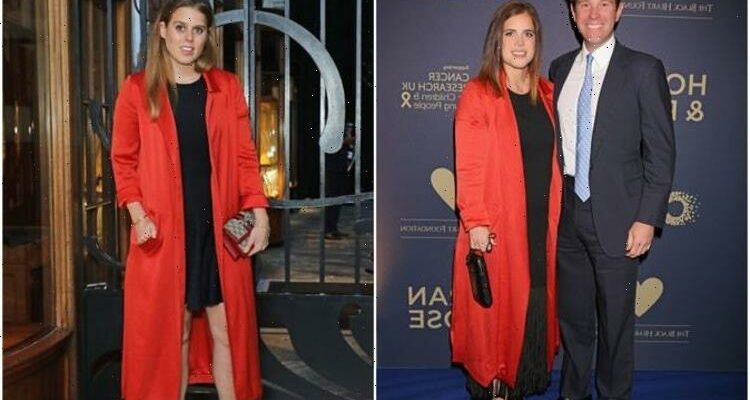 Princess Eugenie and Jack Brooksbank attended the Horan & Rose Gala at The Grove in Watford, in order to raise money for The Black Heart Foundation. However, the Princess impressed royal fans by wearing a recycled jacket of her older sister Princess Beatrice, showing that they are just like any other pair of sisters who borrow each other’s clothes. The thrifty Princess looked radiant wearing her older sister’s jacket, and has inspired many royal fans to embrace sharing clothes with their siblings.

Princess Eugenie, who welcomed her first child August Brooksbank in February, is following in the footsteps of the Duchess of Cambridge who famously has re-worn clothes at royal engagements over the past decade.

Beatrice and Eugenie share an incredibly close bond and have even talked in the past about sharing their wardrobes.

The Royal Family are notoriously thrifty with their clothes, notably the Queen and Kate Middleton, so sharing each other’s wardrobe fits in with their thrifty style completely.

Both sisters also have similar styles when it came to accessorising the beautiful tomato red coat.

The York sisters both decided to style the coat the same way, pairing the item with classic black dresses to give their ensembles a sophisticated finish.

The royal added a lambskin black bag by Chanel and sported a sleek new hairstyle, wearing her hair in a slicked straight style instead of her usual wavy locks.

The £700 jacket from London-based designer Galvan completely sold out back in 2019 when worn by Beatrice, and was recently stopped being sold by the outlet.

The fact the coat is now out of season however still looks incredible on Princess Eugenie shows how trendy she is when it comes to her style.

The coat is also perfect for the autumn weather now September is here, and can even be worn in the winter months too.

One dupe royal fans can buy is from Boohoo for only £14.40, to channel Beatrice and Eugenie’s effortless style.

Princess Beatrice made headlines in 2020 for her coronavirus pandemic wedding, and even re-wearing an old dress of Queen Elizabeth’s which Beatrice transformed into her wedding dress.

Princess Eugenie and Jack Brooksbank were treated to an evening of entertainment at the event on Friday, enjoying a selection of music and sport.

The royal couple were seen disembarking from a plane at Aberdeen Airport back in August to visit the Queen at Balmoral, having reportedly taken a commercial British Airways flight from London Heathrow.

Six-month-old baby August was dressed in a white ensemble and was accompanied by his nanny as the family made their way to a Range Rover to transport them to Balmoral.

Eugenie and Jack are visitors to the Queen’s Scottish estate every summer, but this was their first holiday with their new baby boy.

During an appearance in ITV’s ‘Our Queen at Ninety’, Eugenie described Balmoral as “the most beautiful place on earth”.

She said: “I think Granny is the most happy there. I think she really, really loves the Highlands.

“Walks, picnics, dogs – a lot of dogs, there’s always dogs – and people coming in and out all the time. It’s a lovely base for Granny and Grandpa, for us to come and see them up there; where you just have room to breathe and run.”