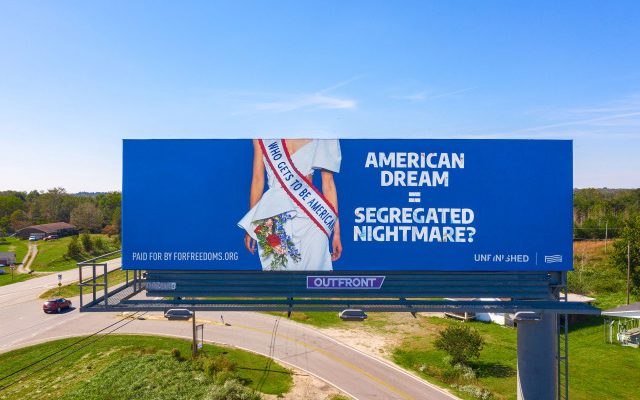 Prabal Gurung has joined forces with For Freedoms as part of its 2020 Awakening project.

Named in a nod to the Wide Awakes, an 1860s group of abolitionists who helped to elect Abraham Lincoln, the Awakening initiative features billboards in 50 states with messages of healing, listening, justice and awakening.

An image from Gurung’s spring 2020 collection is featured on a billboard in North Carolina with “American Dream = Segregated Nightmare?” The collection’s theme was “Who Gets to Be American,” and the show’s finale featured models walking down the runway with sashes imprinted with that. The concept was inspired by a 2018 Time magazine cover that posed a similar question.

Gurung, who became a U.S. citizen in 2013, said he selected the swing state location for his billboard.

The starting point for the spring collection sprang from a conversation with a potential investor in 2018. Gurung said they were talking about business, his desire to redesign the American aesthetic and how he viewed the country as a melting pot made up of different people like him. Gurung recalled, “He said, ‘Well, you don’t look American so how can you define what America is?’ I said to him, ‘What you mean to say is that, ‘I don’t look white.’ He was flustered, and I said, ‘Don’t worry about it. It’s not a question that I haven’t heard before. I just want you to know that I’m an American citizen. I pay my taxes. I work here. More than 95 percent of my collection is made in New York. I’m fully involved in contributing to this country, but also socially, culturally and with my voice.’”

Gurung, a Nepali-American, who came to the U.S. 20 years ago, said he was honored to be asked to be part of the For Freedoms project. The billboard features a close-up of a white dress with floral detail from his spring 2020 collection. His name does not appear in the image. During this divisive time, he said he wanted to celebrate the goodness of America.

This isn’t the designer’s only election-related spotlight. Democratic vice presidential candidate Kamala Harris wore a pantsuit by Gurung when delivering her acceptance speech at the Democratic National Convention this summer.

In other campaigning news, First Lady Melania Trump traveled to the battleground state of Pennsylvania to make her first solo appearance on the campaign trail this year. With rain in the forecast, FLOTUS wore a khaki green Michael Michael Kors belted trench coat to address about 300 people in Atglen, Pa. Afterward, she made an unscheduled stop — a pizza run — at the Republican Committee of Lancaster County, where she thanked volunteers and dropped off some pizzas and soda, according to a White House pool report. Representatives from Michael Kors did not respond to a request for comment Tuesday. As some on social media pointed out, Tuesday’s look was similar to what FLOTUS wore in late August to address the Republican National Convention. But that tailored ensemble was Alexander McQueen.