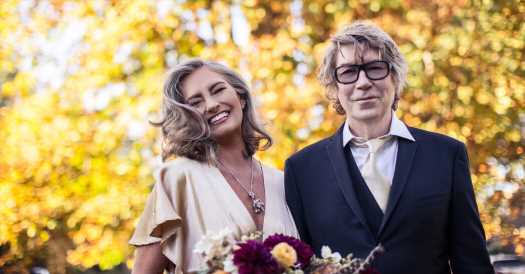 Erika Anderson and Richard Butler fell in love the way people do in the movies.

Ms. Anderson, a 56-year-old actress and model with IconicFocus Models in New York, and Mr. Butler, a 64-year-old singer and artist, were married Sept 16 before Mayor Lee Kyriacou at City Hall in Beacon, N.Y. They also had a celebration ceremony for family and friends in their backyard in Beacon on Sept. 19, that was led by Leslie Vosshall, a family friend.

Nine years earlier, their relationship began with a romance more likely to be found on a big screen than in a small town.

“I guess we did get off to a pretty entertaining start,” Ms. Anderson said, laughing. “You know, the rest of it hasn’t been too bad, either.”

The back story of Ms. Anderson, who appeared in the original “Twin Peaks,” starred in the film “Zandalee” and played Greta in “Nightmare on Elm Street 5: The Dream Child,” and Mr. Butler, the founder and lead singer of the Psychedelic Furs, a London-based rock-and-roll-band which recently released their first studio album in 29 years (“Native Rain”), reads like lines from a movie script.

And, if such a script were written …

Opening Scene: Ms. Anderson and Mr. Butler, who were introduced by a mutual friend at a party in Los Angeles in the mid-1990s, are back in touch and have arranged to see each other in summer 2011. Mr. Butler, now living in Beacon, N.Y., boards a flight to Los Angeles, where he meets Ms. Anderson for the first time in two decades.

She picks him up at the airport and is so nervous, that she gets lost on the way home despite the fact that she has lived in Los Angeles for 25 years. After dropping off his luggage at her house, they go out to a sushi restaurant and then for a walk. During that weekend they discover, as Mr. Butler puts it, “the loves of each other’s lives.”

“All I can say is that she was the kind of woman that most men dream about,” Mr. Butler said. “She was intelligent, beautiful and talented, but above everything else, she was a good soul.”

They have their first kiss at the top of Mulholland Drive in Laurel Canyon, looking out over the city. They pick flowers on the drive to her house and fill the house with them. “It was impulsive, electric, amazing,” Ms. Anderson said. “I can still feel the energy.”

Scene 3: (The next day.) More flowers. They visit the Huntington Gardens in Pasadena, and later go to see the movie “Singing in the Rain,” projected onto a mausoleum wall at the Hollywood Forever Cemetery and have a picnic on the lawn there.

Scene 4: (The day after that.) Mr. Butler boards a flight back to New York, but he makes it clear that he is planning on seeing Ms. Anderson again, real soon.

Scene 5: (Two weeks later.) Ms. Anderson makes the first trip in what will become a long-distance relationship, flying back to New York, where she will spend a month to enjoy the Christmas holidays with Mr. Butler. “We don’t have seasons in Los Angeles,” Ms. Anderson said. “Christmas finally felt like Christmas, I was never more satisfied.”

Scene 6: Ms. Anderson puts her house on the market and says goodbye to the West Coast, and her longtime day job, as director of bookings at Pier 59 Studios West, a photo studio in Los Angeles.

Scene 7: Ms. Anderson goes on tour with the Psychedelic Furs, and in February 2010, moves to New York permanently with her cat, Mulligan.

Scene 8: (Summer 2019.) Mr. Butler proposes to Ms. Anderson on Cape Cod during a birthday celebration for him in Yarmouth Port, Mass.

They return to Beacon, where “life is easy and relaxed,” Ms. Anderson said.

“We had a really wonderful time on Cape Cod,” she added. “To be proposed to in such a beautiful place, well, what an unforgettable moment.”