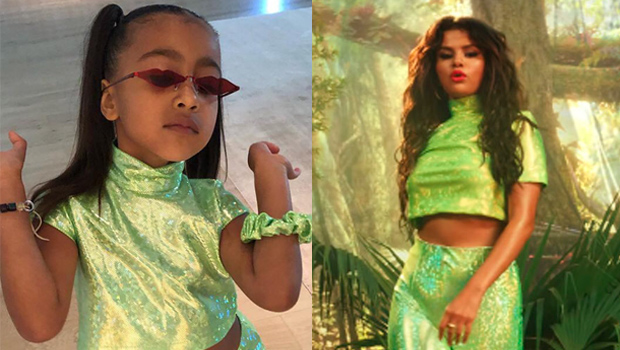 Celebrities get fashion inspiration from everywhere — including other celebs! North wore almost the exact same outfit as Selena — see the adorable look-a-like moment below!

North West knows how to dress for a party! The fashionista is only 5-year-old but she is an ICON already! She wore a two-piece, green sparkly look for Saint West and Reign Disick‘s birthday party on Dec. 1. There was a literal rainforest made in Kim Kardashian‘s house by celeb party planner Mindy Weiss for the kid’s party. “North, you look cool,” birthday boy Reign told her. The cute moment was captured on Kim’s Instagram story. Adorable!

North’s outfit was almost an exact replica of the look Selena Gomez wears in the DJ Snake music video for “Taki Taki” — a song that features her and Cardi B. North added extra glam with a matching scrunchie and tiny red sunglasses. She was just missing Selena’s red lipstick from the video! Instead, she opted for red shoes. She posted to perfection for mom Kim to take a photo — this kid has attitude! See the side by side below!

The party was over-the-top and so cool — we have major FOMO. The rainforest was brought indoors for the Tarzan-themed party, complete with the sights and sounds of the Amazon. There were two giant cakes for each birthday boy, as well as cake pops, cookies and more, decorated with jungle animals and leaves. Reign’s sister Penelope also got into the theme, wearing a leopard dress. The family loves to throw massive bashes for birthdays and holidays, and this one totally lived up to the hype! It looked so beautiful!