MILAN — The awards red carpet is not the only fashion show that seems to have fallen relatively silent on the subject of #MeToo: the runways, which in recent seasons focused broadly on a redefinition of female empowerment, at least as far as it relates to image, have almost entirely dropped that theme.

Indeed, as the Milan collections drew to a close, they seemed to have largely discarded any effort to address bigger political or social issues, including sex, once a joyful playground for designers in this city (admittedly, it’s a very fraught subject in Italy at the moment), and climate change, despite the fact it has been almost 60 degrees all week.

Instead, they were dominated by — family values! Not of the far-right kind; of the most branded, uncontroversial, personal/company history kind. 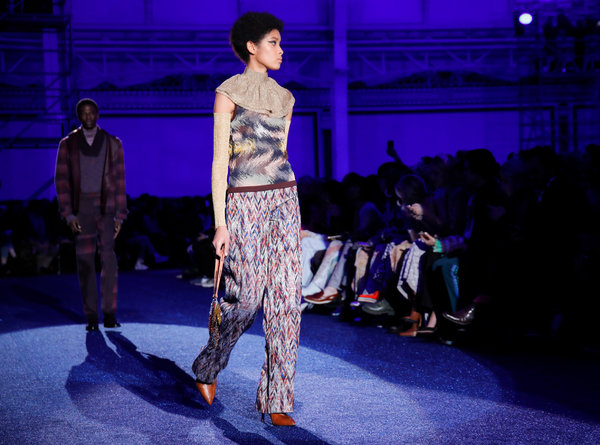 You can understand it: The past is so much more predictable than the fuzzy danger of whatever is to come. But it doesn’t always make for the most compelling clothes, even if both men and women are walking the runway. Especially when viewed through a sepia-tinged lens.

Or one washed in electric aquamarine. See Missoni, where the whole room was bathed in a cerulean light meant to represent a “door that connects different moments in the history of a fashion house,” like a magical wormhole in space and time leading to a moment in the mid-1970s (according to the show notes) when women wore enveloping striped capes, chunky zigzag coats, thin swishy trousers and long metallic sheaths. Also arm warmers, big neck doilies and little rolled-brim beanie caps. And men sported a lot of chevrons.

At Etro, Veronica Etro said backstage before the show that she had been thinking about her family’s recent 50th anniversary exhibition, and her own time as a student in London and the meaning of “timeless,” and then proceeded to send out tapestry suiting and puffed-sleeve cocktail dressing, paisley robe coats and big 18th-century-style skirts — worn over hot pants. With pockets.

And at Salvatore Ferragamo, Paul Andrew, the newly named creative director of the brand (he had been in charge of women’s wear and shoes but recently added men’s), paid homage to “family, the cultural continuity between generations.” Then he offered up a little something for everyone: gray pinstripe wrap jackets over wide pants; leather shirts and anoraks; scarf-print silk skirts; evening puffers; spaghetti-strap gowns; and one very peculiar new idea — a suit jacket with a drawstring waist that could be cinched back for a kind of “curtain going up!” look. Huh.

There was a lot on offer, to be sure — there has been a lot this week in general, with shows bloating up to 60 or 70 looks — though it’s starting to seem less like optionality than lack of decisiveness. There’s too much waffling, and treading water, going on.

Don’t like the abstracted tiger print in blue, brown and cream that Paul Surridge created at Roberto Cavalli (which might have looked like sine waves or topographic lines if you didn’t know the house’s history)? Here it is in black and white. Or in pastels. You can have it as a high/low dress or a suit or a long-sleeved turtleneck and pleated midi skirt. Or you can forget all about it and try on a python tailcoat. Or a white tux.

At least at his own dual gender show, Giorgio Armani went all-in for one idea. That the idea happened to be (drumroll, please) blue! somewhat lessened its impact, but give him credit for stick-to-it-ness.

There were neat black jackets, with a slim squiggle of blue running down the center, over jodhpur pants. Trapeze swings of black and blue with rosettes encrusted around the hem. Glossy black velvet and one-shouldered beaded tops. More jodhpurs. More variations on the theme in minutely detailed bows and swirls and swags. Assorted tuxes. It was all very 50 shades of classic Armani, the executive kind.

While at Versace, it was very grunge, the defanged kind.

Donatella Versace has been playing in her archives for awhile now — ever since her homage to Gianni collection in 2017 — and this time she took the vernacular of the house and reimagined it through the artistic lens that seems to have become something of a re-trend ever since Marc Jacobs decided to bring back his grunge collection a few months ago.

She layered draped jersey camisoles with Medusa-decorated straps over undone shirts over skinny knits over lace-trimmed slips in barococo print, and mixed them up with fun furs; paired plaid tweed and black leather harness tops and lace tights. There were T-shirts splashed with an Avedon portrait of Ms. Versace used in a 1995 ad campaign for the Versace perfume Blonde and little nothings featuring a print of the bottle. It was fun and kind of funny and entirely toothless; a triumph of commercialism over content. Which maybe is serious cultural commentary, come to think of it, though it didn’t read that deeply on the catwalk. Poor Kurt Cobain, howling into the void.

Which is why it was something of a relief to discover that Stella Jean, the most convincing of all the New Gen designers in Milan, had the courage to take an old trope — Le Grand Tour — and break out of its Eurocentric mold. She reimagined it as an experience that included Africa and Polynesia, with establishment silks and stripes and Gauguin references; red leather giraffes roaming across a field of python-print jersey.

And that, at Marni, Francesco Risso had eschewed decade-hopping and heritage-referencing to actually dare to delve into the scary subject: eroticism.

Or, to be specific, neuro-eroticism (the name of the collection was Neuroerotik). Which, the show notes rhapsodized, was about “the meeting between imponderables: the eroticism of body language and the mysterious plan of neuro-connections. An exploration of sensuality, looking, doing away with respectability and censorship.”

Indecipherable? So, kind of, was the collection, which was full of contradictory impulses and a frenetic undone-ness: slithery red and white and black pajama silks and nightgowns, sliced-up suiting, pixelated prints; and connected in odd ways by rows of rings and chain link harnesses, twists and turns.

Sometimes the contortions were hard to follow. But at least he is trying for something new, trying to figure out where we go from here. Trying to give women (he has not combined his collections) a new, as opposed to old, way to express themselves.

That’s what has been missing from Milan most of the week: that kind of ambition, that kind of willingness to take risks. So you stumble. So what? That’s how we fall into the future. And when we do, we need something to wear. 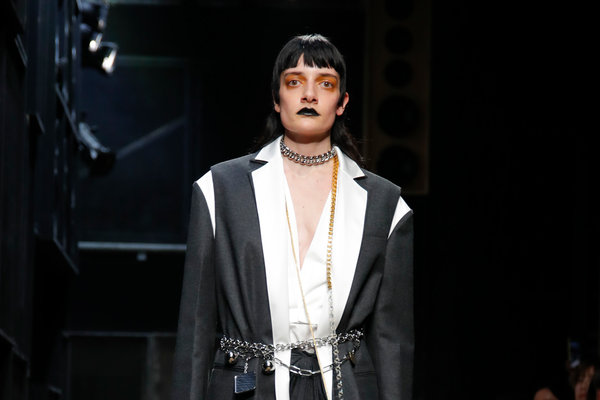 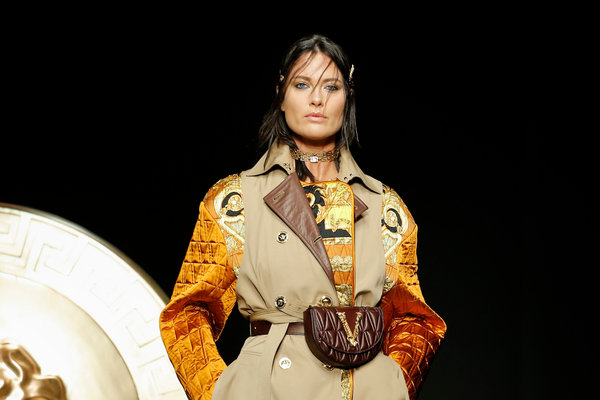 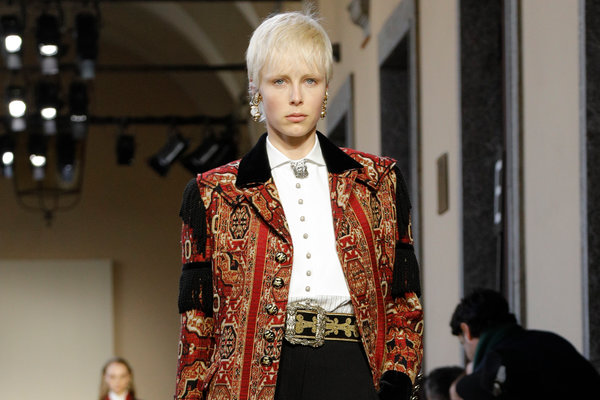 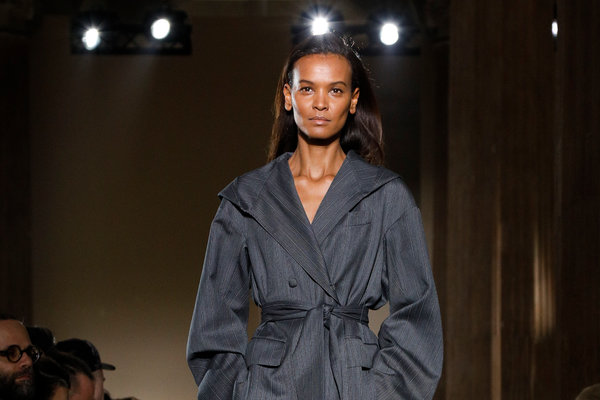 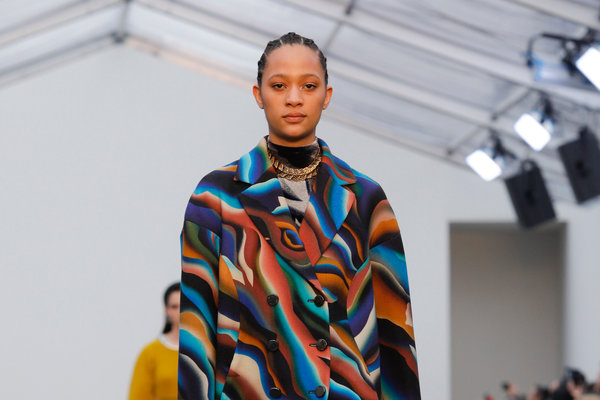 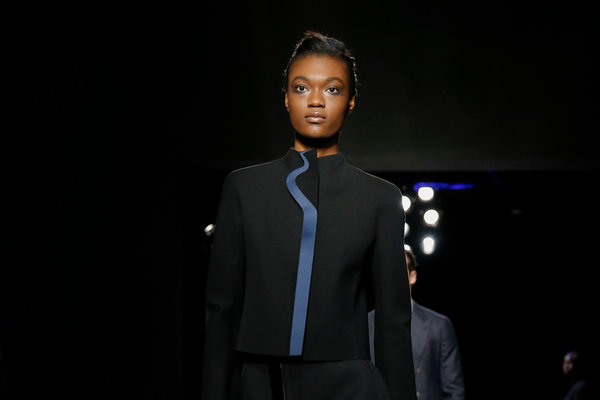