The latest crypto-token craze is spilling over into watches.

Following a torrent of record prices for digital assets from artwork to sneakers, the first watch NFT — or “nonfungible token,” verified by blockchain technology — was offered early this month. It didn’t sell, and the auction has been extended.

But other NFT prices, realized on online platforms and by traditional auction houses, seem to signal that NFTs are attracting investors as well as creating new ways to own or just enjoy watches as dematerialized assets. And more watch NTF auctions are scheduled.

The first watch NFT to go on sale was the Bigger Bang All Black Tourbillon Chronograph Special Piece, offered by Jean-Claude Biver, the industry veteran who emerged from retirement to seize an opportunity to make history.

“What we are doing today is a world first that will have wings,” Mr. Biver said in a Zoom presentation on March 30, at the beginning of the original six-day auction. “We are at the start of something great.”

[“Still Don’t Get What an NTF Is?” Here’s a quick explanation.]

Mr. Biver’s NFT was a digital photograph — referred to as a “digital twin” — that he took of the prototype Hublot Bigger Bang All Black Tourbillon Chronograph in his private collection. (“I would never sell the watch,” he said. “It is true reference, and the genesis of every model made since 2005 by Hublot.”) 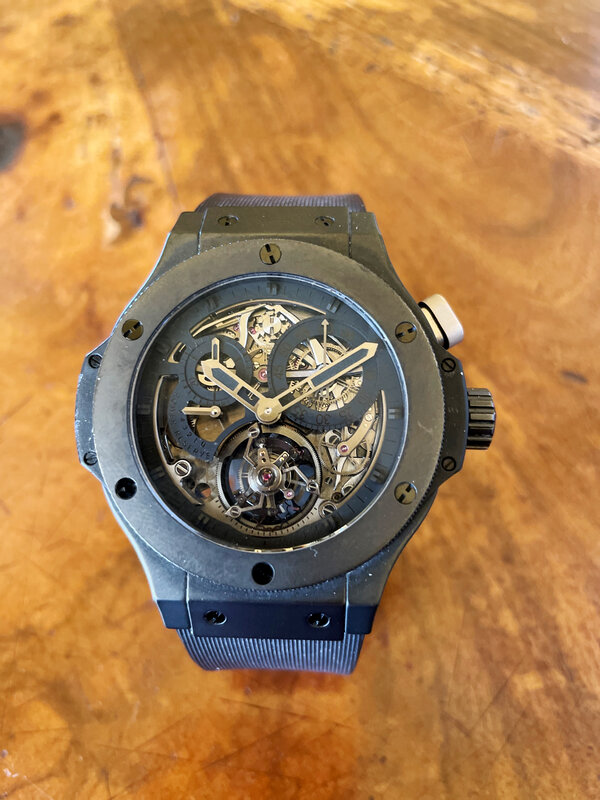 It was accompanied by a code-stamped, cryptographic signature that provided a record of the image’s authenticity and provenance. Such tokens live on a blockchain, a digital ledger used in cryptocurrencies like Bitcoin or Ethereum.

Mr. Biver has achieved many “firsts” in his 43-year career, notably in 2015 when, as chief executive of TAG Heuer, he secured an unprecedented collaboration with Google and Intel to bring Silicon Valley technology to Swiss watchmaking with the brand’s first connected watches.

Presumably being “first” also matters in the emerging NFT marketplace, which would explain the last-minute maneuvering for the watch world’s distinction.

On March 25, the watch brand Jacob & Company announced that it would offer the first watch NFT on the new platform ArtGrails. (The piece, a digital-only SF24 Tourbillon Piece Unique, went on sale April 4, but it was interrupted and started again as a new auction that ended on Thursday.)

But on March 30, Mr. Biver began his auction on the OpenSea platform, with the aid of Carlos Moreira, founder and chief executive of WISeKey International Holding, a cybersecurity company based in Geneva. A giant image of Mr. Biver and Mr. Moreira flashed on the Nasdaq MarketSite in Times Square to let everyone know the auction had started.

The Jacob & Company NFT was a 3-D animation produced by the brand and inspired by its Epic SF24 travel watch, but with two added features to make it a bespoke digital creation: a tourbillon and a split-flap system displaying the names of 10 cryptocurrencies.

“Our watch NFT is a purely digital, tokenized asset that only exists in the digital space,” Benjamin Arabov, chief executive of Jacob & Company, said during a video interview on March 30 from New York.

On April 5, a day into the auction, “it got so many bidders that the platform couldn’t handle it and crashed,” Mr. Arabov said. “It went up to $3.1 million and then the whole thing came crashing down.”

“A lot of my collector clients are intrigued by NFTs, because they are new and different,” Avery Andon, an art dealer and founder of the NFT platform ArtGrails, said in a video interview from Miami. “But NFTs will take some getting used to.”

Will watch collectors be inclined to buy digital watches pegged to a blockchain token, without ever possessing an actual watch?

“NFTs derive their value from their scarcity,” Mr. Andon said. “This Jacob & Company NFT is the only one in the world, and serious watch and NFT collectors see inherent value in that.”

And, Mr. Arabov said, “Most watch collectors keep their watches in the safe 99 percent of the time, anyway.”

Beside assurances of provenance and scarcity, the Jacob & Company NFT was sold with a bit of watch purchasing tradition: a paper certificate and a storage box fitted with a hard drive to store the NFT.

“As a watch collector myself, I love the experience of the box and papers,” Mr. Andon said. “That is why we replicated that physical experience here, except you are not getting a watch, only this very rare token.”

With more and more investors eyeing digital riches, the volume of global NFT trades surpassed $500 million in March, with $240 million in that month alone. Watch auctioneers are just getting in the game.

On April 23, Sotheby’s is scheduled to become the first major auction house to sell a watch NFT when a Ressence Spymaster comes up for sale in Hong Kong along with its NFT, a computer-generated video of the watch.

“The NFT digital video which accompanies the watch seems just the right way to emphasize its true value,” Sam Hines, Sotheby’s head of watches, said in a news release.

And on the same day, Phillips is scheduled to sell a digital artwork titled “Replicator,” by the artist Mad Dog Jones, whose real name is Michah Dowbak. The piece, listed in an online auction, is described as having the ability to reproduce itself every 28 days, resulting in seven generations of artworks.

The auction house also has been “approached to sell tokenized watches, a request we are taking very seriously,” said Arthur Touchot, head of digital strategy at Phillips, who is based in Geneva.

Whether NFTs become a watershed moment in the watch market or a bubble inflated by abstract financial schemes, only time will tell.

But Mr. Arabov of Jacob & Company said that watch NFTs would help push the limits of creativity by freeing watchmakers from material constraints. And, he said, his company already plans to present an entire NFT collection that will be “far more creative than any real-life watch” but that “will live exclusively in NFT world.”

If watch NFTs became “wearable” using augmented reality, like Gucci’s Virtual 25 sneakers, it would not be hard to imagine fans vying to own the digital version of an otherwise unattainable watch — like a Patek Philippe Nautilus or Paul Newman’s Rolex Daytona — that could be “worn” and boasted about, even if only on social media.

“This sale was to get people to pay attention to NFTs,” Mr. Arabov said. “It is not a matter of ‘if’ NFTs will have a place in watches, but ‘when,’ and that ‘when’ is now.”