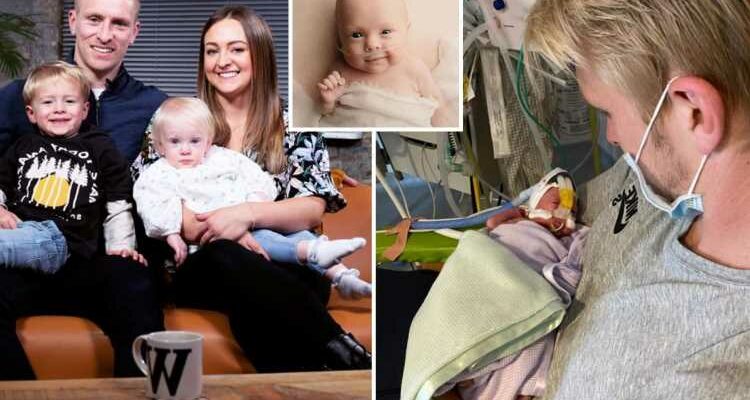 WHEN Burnley FC captain Ben Mee and his wife Sarah discovered they were expecting at the start of 2020, they couldn’t have been happier.

Having welcomed son Jaxon in March 2018, the proud parents decided to try as soon as possible to give him a little brother or sister. 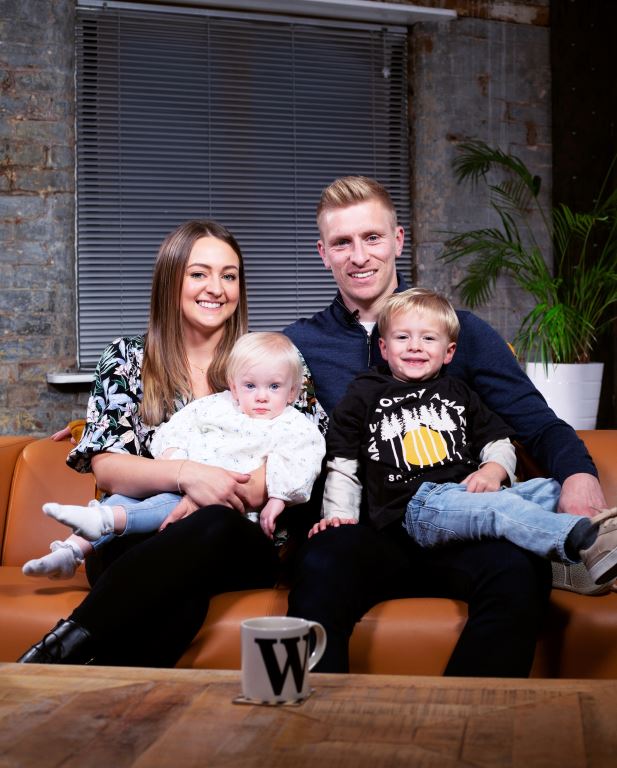 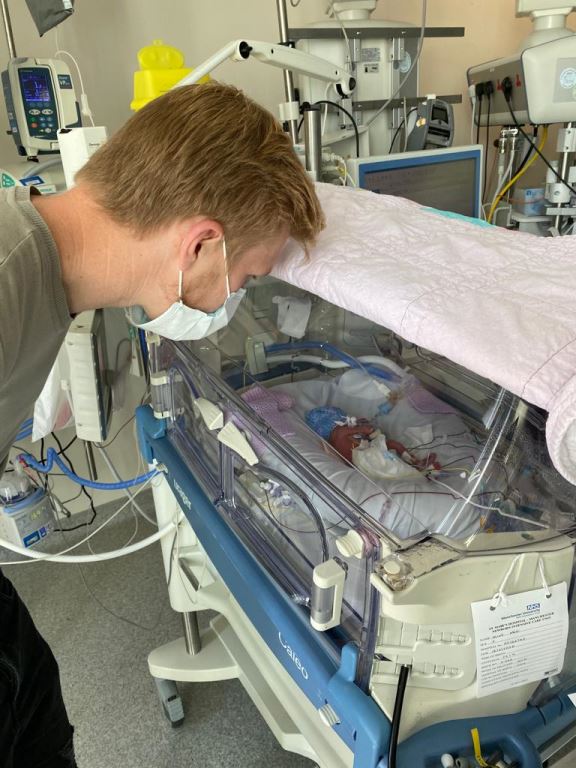 But nothing could have prepared them for the ordeal they'd face with their second pregnancy.

For their daughter Olive was born at 24 weeks, four days after the abortion cut-off – weighing around the same as a tin of beans at 1lb 2oz.

She spent 16 weeks in NICU where it was touch-and-go, with her parents tag-teaming to be by her bedside due to lockdown restrictions.

Ben and Sarah were finally allowed to bring Olive home in September, days before her due date.

It wasn’t until New Year’s Eve that the couple got a call from the hospital telling them Olive’s blood saturation rates were stable enough for her to finally come off oxygen – more than six months after her traumatic birth.

Now progressing well – Olive started walking a few weeks ago – Ben describes their daughter as “the smiliest little girl you could even meet”.

Ben, 32, from Hale in Manchester, told The Sun: “To look at Olive toddling around the living room now laughing, you wouldn’t have a clue what she’s been through, the months of anxiety not knowing if she’d make it.

“While with Jaxon we’d gone straight home and loved being new parents, Olive just seemed too small to be alive.

“We spent endless weeks sitting by her incubator staring at all the bleeping monitors, praying she’d be ok.

“It was so scary, I felt so daunted, unsure what to ask, what I could do to make it better.”

Around 18 weeks into her pregnancy, Sarah started bleeding.

The couple were checked over at Wythenshawe Hospital, but advised to go back home to rest and report if the situation changed.

Worryingly the bleeding got worse, and Sarah went back into hospital where she was told there was a slight tear in the wall of her placenta – but doctors assured her they weren’t overly concerned.

Sarah's gut instinct told her something was wrong and she refused to go home.

Ben wasn't allowed into the hospital due to Covid regulations and said it was "horrible" not knowing what was happening.

Five days later Sarah was moved to Manchester’s St Mary’s Hospital, which could care for babies less than 32 weeks old.

Ben said they knew then their baby might be coming "very early" and in the early hours of May 17, he got the call that Sarah had gone into labour. 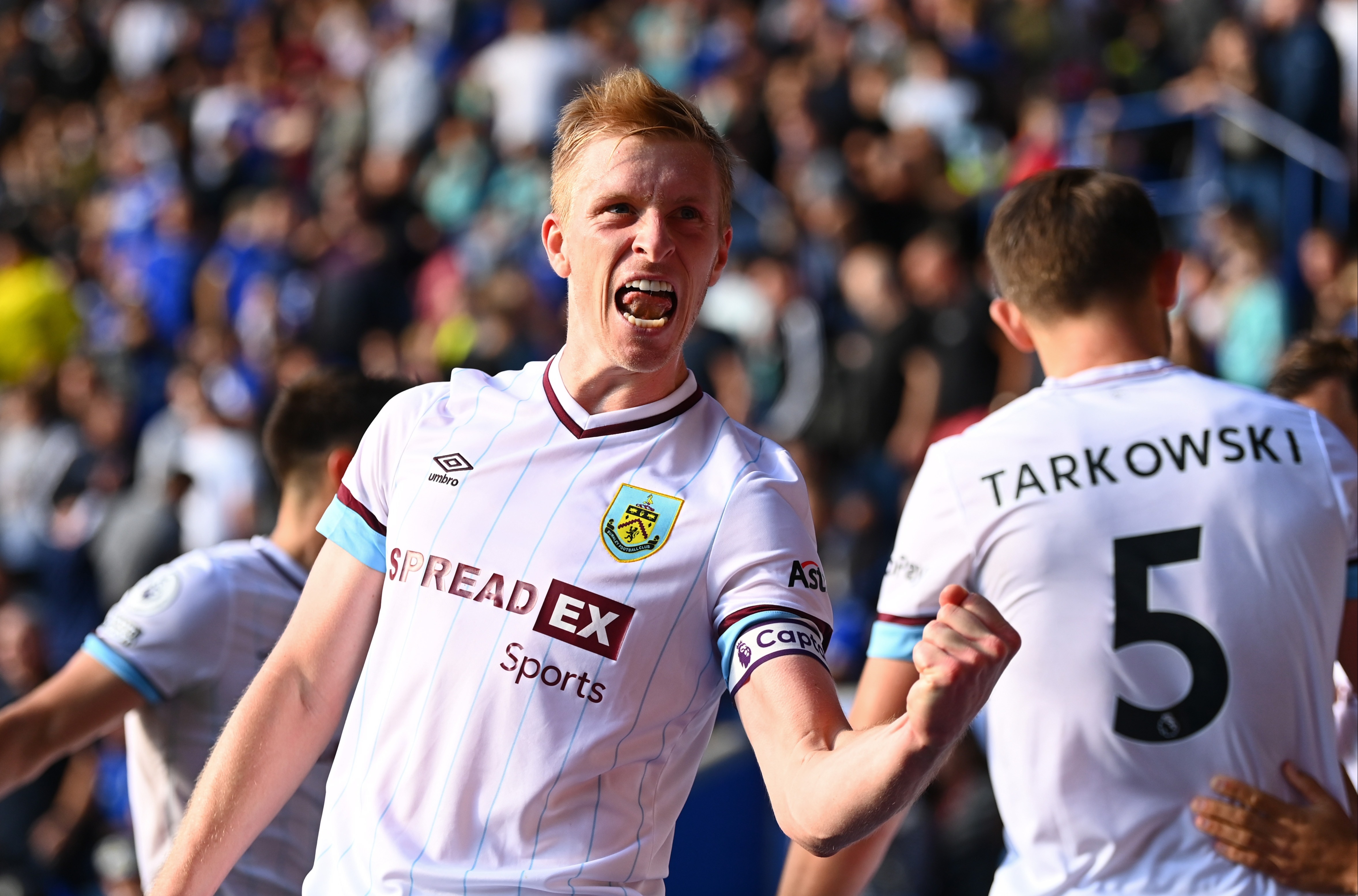 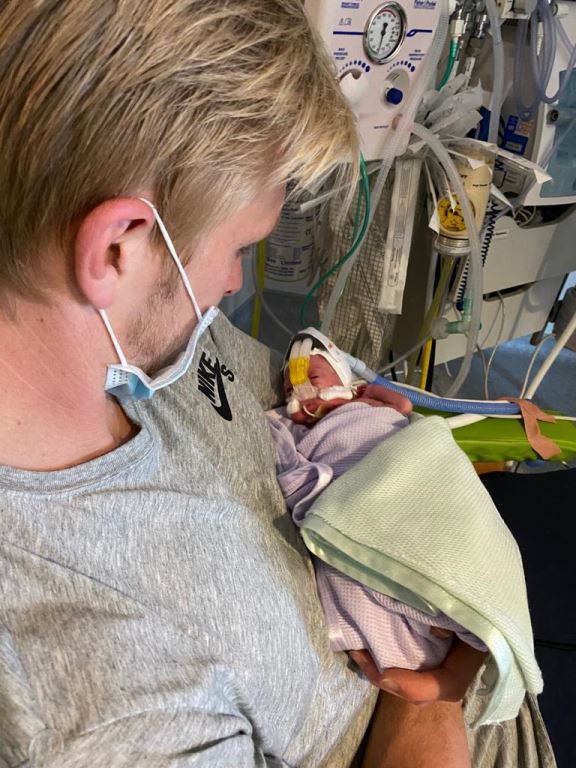 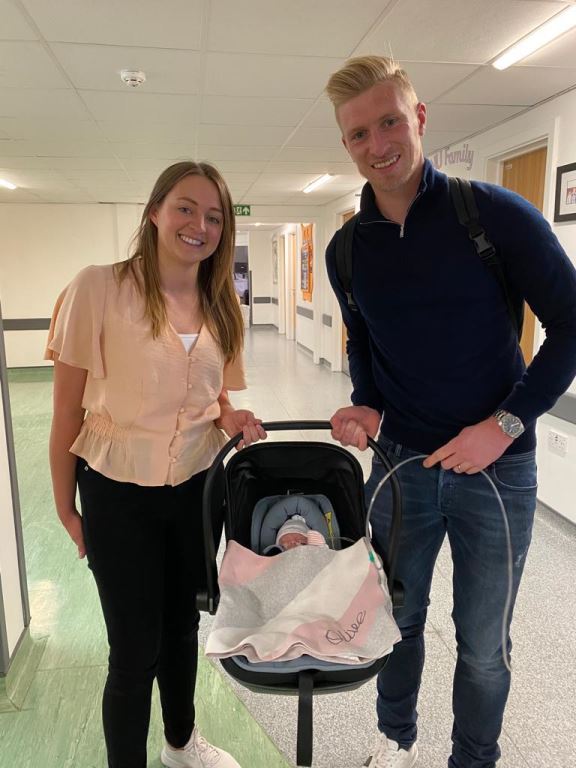 He rushed to the delivery suite, where Sarah had been given steroid injections to help the tiny baby breathe, along with magnesium to protect its brain.

He said: “I remember being just so worried for the baby and also Sarah.

“We’d been told they’d always save the mother at this point if something went wrong – I’ve never felt so helpess.”

That labour stopped, and Sarah was taken back up to the ward, but the next morning it restarted, and after just two hours tiny Olive was born, almost 16 weeks before her due date.

Ben recalled: “She came out in a sac and looked like a tiny little bird, almost too small to survive.

“She was then put in a plastic bag to keep her warm and then into an incubator. We briefly saw Olive, but it wasn’t until five hours later that we got to properly visit her in NICU.”

Even then, because of Covid regulations, the couple could only visit their daughter one by one.

She came out in a sac and looked like a tiny little bird, almost too small to survive

Ben said: “While Olive was impossibly small, and covered in seemingly endless wires and tubes, finally holding her hand was simply amazing.

"Sarah was given a clean bill of health, too, so for a while everything felt great."

Knowing Olive would be premature, the couple had looked online for positive stories about early births, but struggled to find any.

The pressure and emotions ran so high that Sarah ended up collapsing.

“It was so tough, I wanted to look after both of them at the same time,” Ben said.

“I found it hard because I wanted to put on a brave face for Sarah, to try and be positive and reassure her, but then I’d have to come away from hospital and leave them there.

"It's only down to the amazing nurses that we kept sane.

“The doctors cautiously told us they’d do everything they could for Olive, there’d be good and bad days, but we knew there was a long road ahead of us and no guarantees we’d get to take our little girl home.”

Sarah was discharged after one night in hospital, and the couple slept with their phones by their beds in case something happened.

On training days, Ben would rush home to get Sarah and they spent their afternoons at the hospital.

He said: “That was during strict lockdown. Those were some of my most vulnerable moments – my parents at home with Jaxon, Sarah and Olive in hospital, and me on a 20-minute drive between them, just thinking, processing.

“I’m generally a positive person and Olive was doing so well, getting stronger and stronger, so I fed off that.

"Training was a release for me, and also a way to talk to some of the team about what we were going through.

“I only learned by sharing Olive’s progress that two of the staff had also had premature babies, something I’d never have found out if this hadn’t happened.

“Just talking to other people outside of our bubble, it really helped.”

While playing Manchester City in June, Ben discovered Manchester City's David Silva’s son Mateo was born after only 25 weeks, and the Spaniard was able to offer some welcome words of comfort.

Just talking to other people outside of our bubble, it really helped

While Olive’s condition did slowly stabilise, she was tube-fed and reliant on oxygen and needed six blood transfusions because of her oxygen saturation levels.

Ben said: “There were some really special milestones, like getting to hold and bottle-feed her for the first time, and her moving to a cot, and then back to the Wythenshawe at 32 weeks.

“Leaving the front doors of the hospital on September 2nd was amazing, something we’d dreamed of.

“She’d been inside for 16 weeks, and we’ll never, ever forget the incredible kindness, care and patience shown by the nurses and doctors.”

Still on oxygen 24-7 at home, it wasn’t until December 31st that Olive finally came off her machines and could breathe unaided.

Ben said: “Peeling the little plasters off her face, knowing we wouldn’t put them back on, looking at her gorgeous little face, it was amazing, magical.

“We had a big family Zoom meeting planned for that evening, and I remember holding Olive up to show them all, without any tubes going into her for the first time.

“Our family were over the moon. It was then we felt like we’d made it, our little girl was finally home.”

It provides personalised content each week and features include practical tools like feeding, weight logs and timers, as well as emotional support like journals and mood tracking, and inspiring real-life stories from other families like Ben’s.

Ben said: “Our heart goes out to any other parents who have a premature baby. We know how terrifying it is, and how we’re the lucky ones to have a healthy, happy little girl at home now.

“It’s not possible to prepare for something like this, you just take every day as it comes and desperately try to stay hopeful and optimistic rather than looking too far ahead and fearing the worst.

“I wish we’d had the new Tommy’s app – I’m sure it will prove and invaluable lifeline for thousands of families in coming years.” 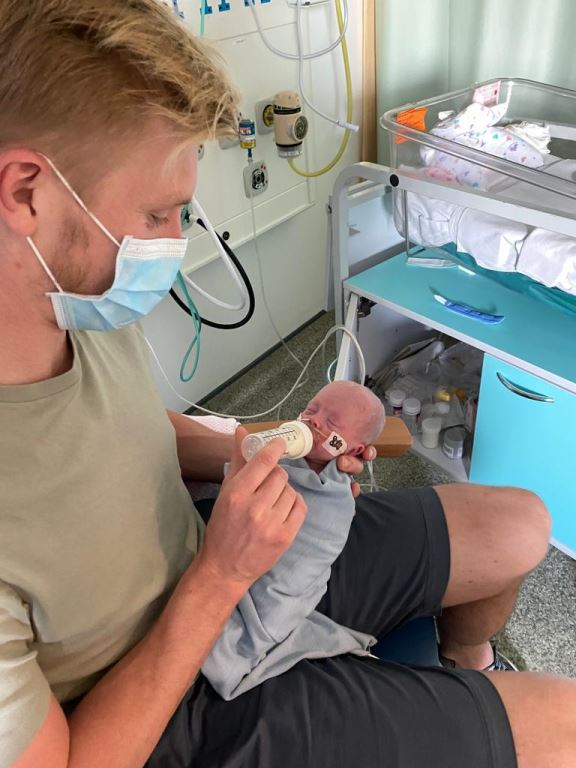 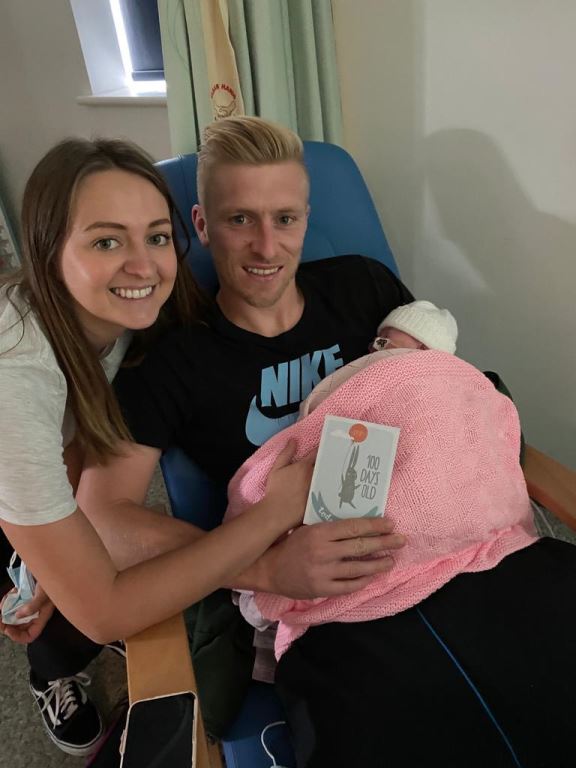 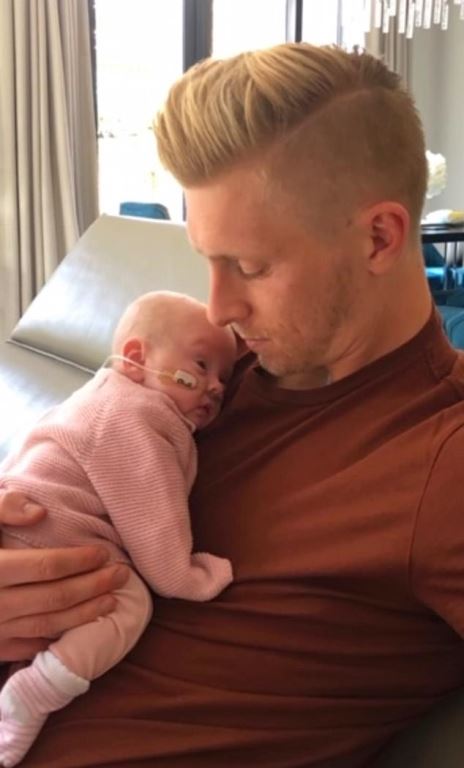 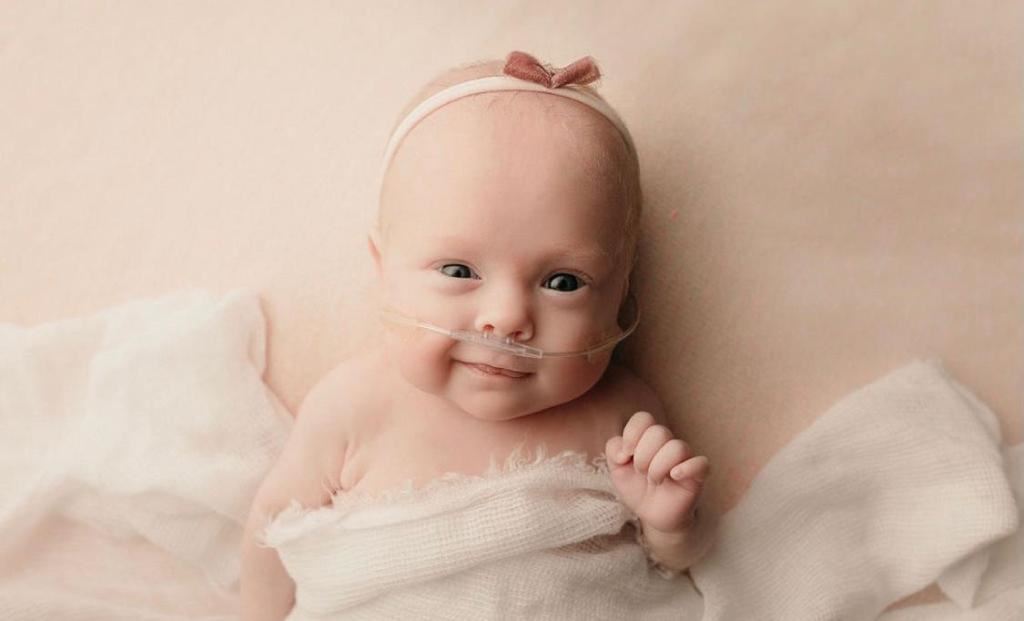 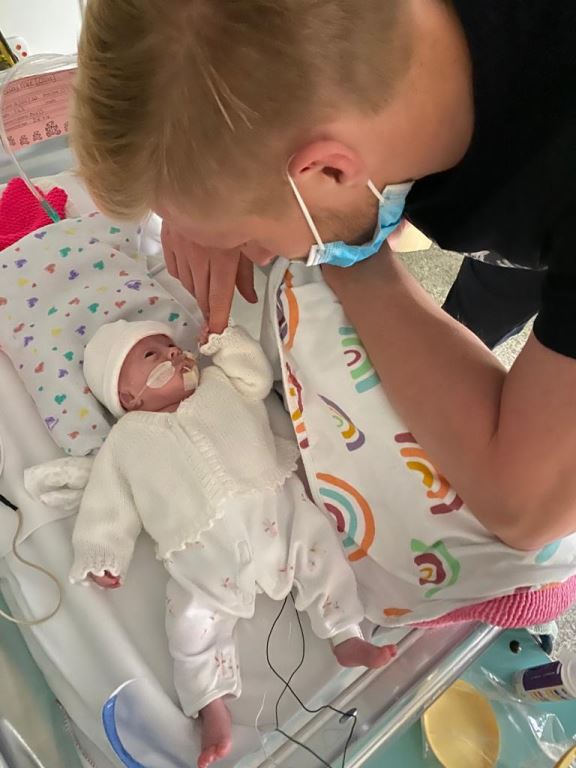 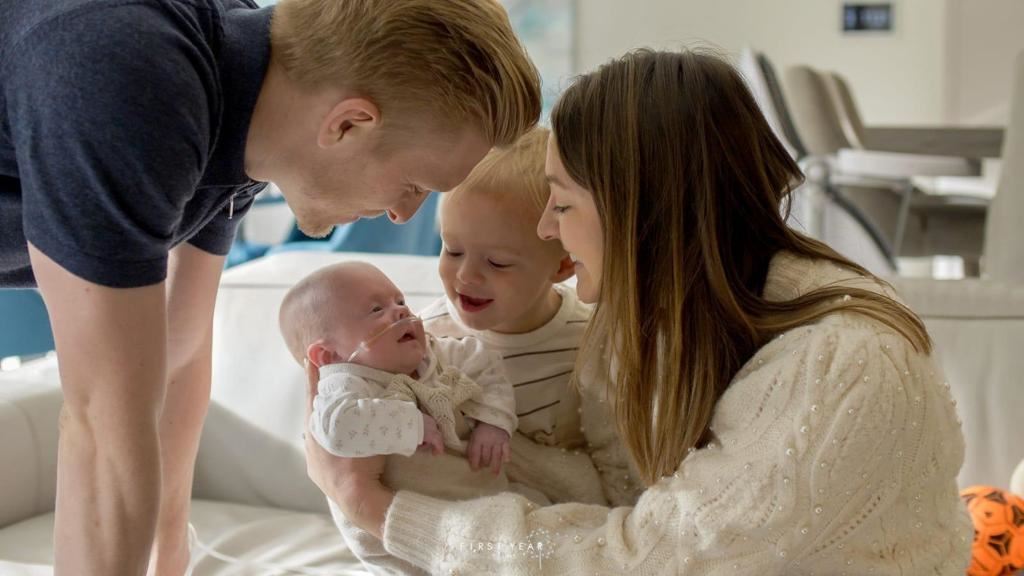