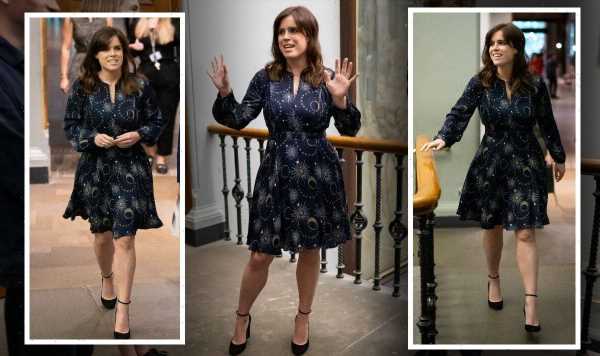 Princess Eugenie to divide time between Portugal and England

Princess Eugenie, 32, stepped into the spotlight this week as she joined in celebrations to mark the Queen’s Platinum Jubilee. The daughter of Prince Andrew and Sarah Ferguson headed to the V&A Museum this morning to view the Queen’s Jubilee Emblem Display. She also met with Edward Roberts, the winner of the emblem design competition.

The mother-of-one, 32, looked chic in a moon and star-print navy dress from Whistles, costing £149.

She previously wore this dress to the Lord Mayor’s Big Curry Lunch in April 2018.

Sadly, this design has completely sold out.

Eugenie paired the dress with a simple pair of black stiletto heels and styled her hair in beautiful waves.

Instagram user @princessbeatrice_mmozzi said: “Must be that Portugal glow!”

Another account, Melanie_4683 added: “Look how tanned she looks!

“Living her best life in a beautiful country.”

The Jubilee Emblem design competition, which was run by the V&A and Buckingham Palace, called on young people aged between 13 and 25 to design an emblem to signify the Queen’s 70-year reign.

A panel of experts including designers, artists, and a representative from the Royal Household picked Edward Roberts as the winning designer.

His emblem was featured throughout the Platinum Jubilee celebrations.

Meeting the competition winner was a fitting engagement for art fan Eugenie, who studied History of Art at Newcastle University.

She is also the director at Mayfair gallery Hauser & Wirth.

The visit follows an article published in The Spectator today, in which Eugenie paid tribute to her beloved “Grannie” to mark her 70-year reign.

She said she hoped her one-year-old son August would grow to have the Queen’s “patience, her calmness and her kindness while always being able to laugh at himself and keep a twinkle in his eye”.

Eugenie and her sister Beatrice will not appear on the balcony at Buckingham Palace tomorrow at Trooping The Colour after the Queen was forced to limit the numbers to “those members of the Royal Family who are currently undertaking official public duties on behalf of the Queen”.