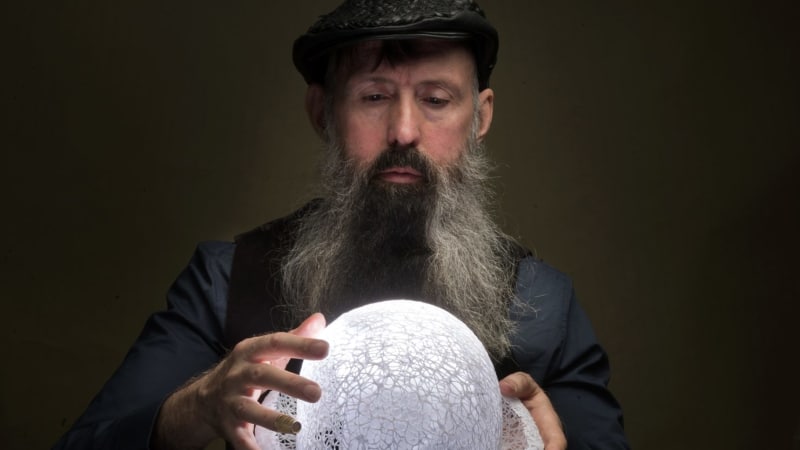 A week before the start of the Caulfield Cup Carnival – usually the busiest time of the year in the hat business – disaster struck for milliner Jill Humphries, of Jill & Jack Millinery. It should have been her glory year: David Jones had picked up her label (ordering nearly 120 hats for their spring season), and she found herself being busy all year around, not just seasonally. Then this happened: the factory behind her house caught on fire, and the water cannons all but destroyed her roof, making the place unliveable for her and her family. It's not easy being displaced at the best of times; it's worse when you're meant to make boaters and wide-brimmed hats and other assortments of crowning glories while Caulfield and Flemington heat up. What to do? Simply go to work every day, anyway. "It's a case of head down, and deal with it after the last race day," she says.

For those who think that millinery is on the wane, there are 55 Victorian members of the Millinery Association, and obviously more who haven't joined the group. The statistics are staggering: according to Joanne Mercer, the general manager of accessories at Myer, 35,000 units of millinery are sold by Myer in the lead-up to the spring racing carnival, with three pieces sold every minute just before Derby Day. David Jones' millinery buyer Liz Ormando says that pre-carnival can turn the store into a frenzy. "It's our absolute Christmas. We've got five weeks of craziness, and you can't move. I've seen some customer buying three pieces at once; everyone grabs around 10 pieces and tries them on, pushing for the mirror. There's a bit of a sample sale vibe going on, but they're not fighting – they're more likely to help the person next to them, and ask them their opinion." 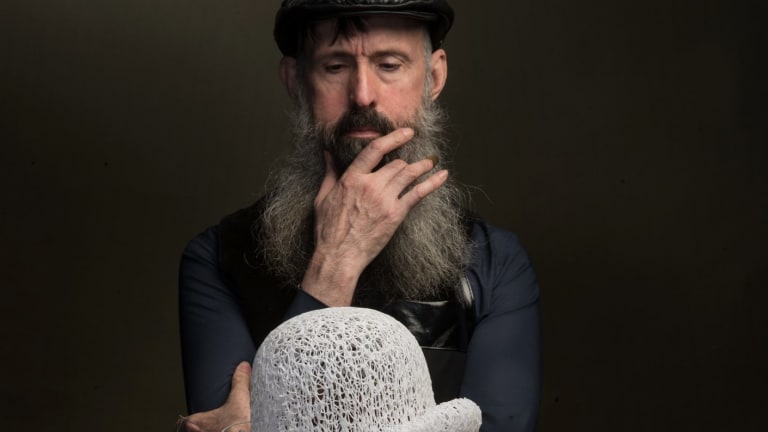 In Melbourne, we have an enviable tradition of millinery – one that sets itself apart on a global stage. Catherine Milner (real middle name!) Ellen, who owns Prahran East hat store The Essential Hat, says, "I think we have some of the best millinery in the world, and some of the most prolific milliners. English and French milliners are very jealous of the season we have here for the races, which I think is down to Fashions on the Field. It's a really, really big thing here, and it keeps a lot of little industries going at this time of the year."

But to be one of the Melbourne millinery mob can be both a rewarding and thankless prospect, depending on when you ask. They all have their horror stories. The Human Chameleon's Kristine Walker says: "Every year, I get the same generic requests from the same generic nobodies, wanting to borrow something. Apparently they'll pay me in 'exposure', although last time I checked, I couldn't pay my bills with 'exposure'. This year, I decided to create an influencer-specific headpiece, that I'm willing to loan to those who consider themselves to be #instafamous – so that word is written out on a headband. No takers so far!" 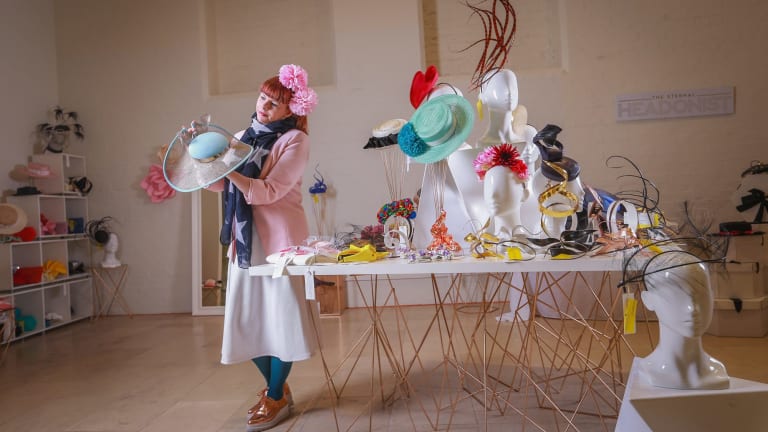 Zorza Goodman, of Taboo Millinery Melbourne, created a hat that won the Stella Artois Caulfield Cup Professional Millinery Category award last week, and remembers when "an Aussie music icon had her stylist contact me on Cup Eve to tell me she needs a piece as she has been invited into the Birdcage [at Flemington]. At 3am, I drive into the city with a new headpiece. At 5am, I meet with the stylist, only to be told that she has changed her wardrobe and is going with milliner number two!"

Not that there aren't rewarding tales in the mix: "Once a client rang me crying because she opened her parcel and it was even more glorious than she imagined," says Goodman. And milliner Kerrie Stanley remembers the time her model friend tried on one of her bejewelled hats, and wore it to Derby Day. "A year later, I bumped into her at a function where she was with a handsome man. He said, 'I have to thank you. I was in a really crowded marquee and I looked across the room and I spotted that hat and I looked down and I spotted that woman.' He introduced himself by saying, 'I really love your hat.' And now they're getting married!"

No doubt, it's also the milliners themselves who keep the industry going strong, a group of people who Annabel Allen, of online hat store The Eternal Headonist, says "are such beautiful, passionate people. Every piece is a labour of absolute love. The hours that have gone in perfecting the lines and the stitches and the way something curves – it's a piece of art. It's always nice thinking you've bought something crafted by hand, by an actual human being who's poured their heart and soul into it." Milliner of 33 years, Peter Jago, who has had the likes of Rupert Murdoch write him blank cheques so he can supply a wonderful hat, goes further to describe a milliner's necessary qualities: "Millinery is probably the last bastion of couture. It's a skill [whereby one] needs to be a sculptor, a textile expert, a colourist, a stylist, a psychiatrist."

For some, riding the ups and downs of the industry has proved challenging. Phillip Rhodes recently closed his workroom after 26 years, thus shutting the door on a way of millinery-making that harks back to yesteryear. "No one's interested in little artisans anymore, and the rent was killing me. But it meant something to me." In an era where people can buy a mass-produced headpiece, he says that the craftsmanship of a milliner can be overlooked. "If someone brings in images of other people's work, I say, 'You need to go to those people!' It's not just hands for hire. The way I work, I don't do a lot of fittings, I don't particularly share a lot of information. But I'm not vociferous and I don't impose – I listen. You have to be an adventurous spirit to have a hat made the way I make hats, but in the end, when they say, 'It's lovelier than I thought,' you know you're still in the game and hitting the mark. That's the satisfaction." 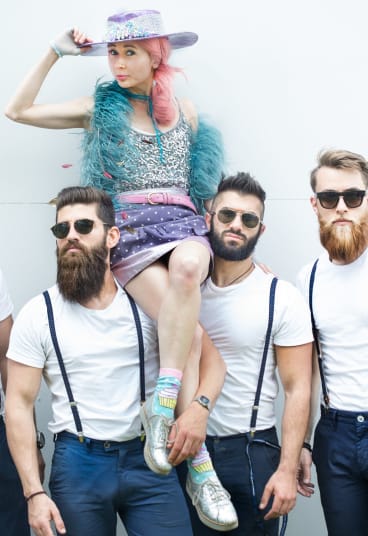 Kristine Walker in her own creation on the shoulders of the Bearded Bakers.

He's not the only one who has had to change the way he works: Myer milliner Richard Nylon has also downsized his studio (like Rhodes, he very much still makes hats) while The Eternal Headonist has moved from a bricks-and-mortar store to an online one.

There is something very old school about the traditions that the milliners uphold. At this time of year in The Essential Hat, six milliners are working every day, making adjustments on hats, creating others to order or getting silk flowers ready. One might be experimenting with braid and wire, while another is sewing in hat labels to the finished product. 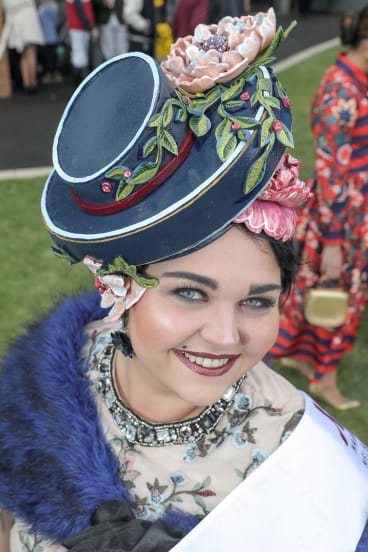 But the modern world has altered the hat universe, sometimes for the better. Jill Humphries says social media plays a large part in her sales, since she relies on hats being sold after she posts them on Instagram; it helps that her clients are willing to take risks, and don't need to try on a hat before buying it. Milliner Felicity Northeast trekked for three kilometres to visit a fabric store in Florence, only to be refused entry when she arrived, as they didn't believe she was a milliner. She asked them to search her website, and when they did, they promptly saw famed British milliner Philip Treacy on there, interviewing a Fashions on the Field entrant about Northeast's hat. Doors suddenly opened. Rose Hudson, president of the Millinery Association of Australia, says that "the millinery industry is in a state of flux because suddenly there's a huge hat hire market that we didn't have before, and a lot of established milliners are frightened that they will lose business from that. But with a hired hat, it's got an extended life. And the girl who's 25 now and hiring a hat, will probably buy a beautiful hat when she's 35. So the hire hat is a gateway hat to that."

For milliner Richard Nylon, adaptation is the key to survival. "The people who survive can see a trend coming and take a bit of notice of it. Like the sparkling headband trend – it's still incredibly strong, even though it's not what a lot of us would say is millinery. But it goes on your head, and even though now it's quite acceptable to have what amounts to a wired necklace on your head, it's still pretty and fun and not time-consuming for a milliner to make. Perhaps this year we're reaching maximum headband, but I'm still doing my own take on that." 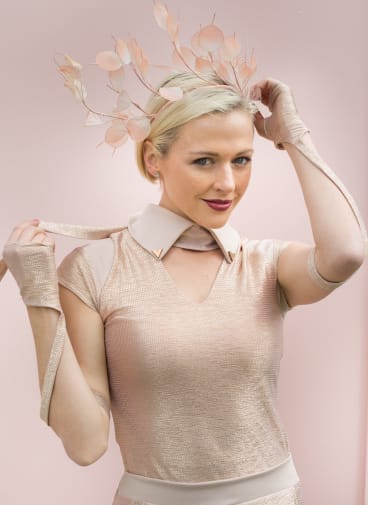 Chantelle Ford in a dress by Jonte design and Ford millinery.Credit:Simon Schluter

Sometimes, what a milliner really needs to keep going is a second job. Many, like Melissa Jackson, supplement their millinery with teaching, and she is fashion design lecturer at Kangan Institute. The Eternal Headonist's Annabel Allen says the challenge is that "you put your heart and soul into building something up that's essentially for a few weeks of the year, so everything you've worked towards is make or break in those weeks, and then you've got two weeks of manic activity. From my perspective, 80 per cent of our business is spring racing, and 80 per cent of that is within the last two weeks of the season. It's really difficult to keep it going all year around. I think people have this perception that … milliners are earning a lot of money, but it's not the case at all. The amount of work that goes into one hat is a lot more than they've charged for it in retail price."

Melissa Jackson says that it's also a myth that a hand-made hat is expensive. "For the craftsmanship and acquiring a product detailed to a client's requirements, it's actually quite affordable. If you're clever, it can also be adapted to re-wear in different ways. And it's a way of providing longevity in your wardrobe, a good quality piece that's sustainable over time – compared to some of those cheapie headbands that get chucked out and become landfill."

David Jones' Liz Ormando says she makes a concerted effort to support local designers. "I joined over a year ago and added five Australian milliners that had all Australian-made product. I think that's really important."

And there's no doubt the right millinery can create a frisson. At last week's Caulfield Cup, one stand-out was milliner Chantelle Ford of Ford Millinery, bedecked in a top hat, Rebecca Vallance suit and shirt with bow tie. "Wearing a hat is an opportunity to look absolutely sensational. People aren't getting scared off my wide-brimmed hats or pillbox hats or largeness or elegance. We've seen crowns and dainty little fascinators, but now you can go wide, and it's everything and anything. I've not seen anything like this, where a woman can see something she loves and go for it. And that's the exact point of millinery – it offers the opportunity for drama."