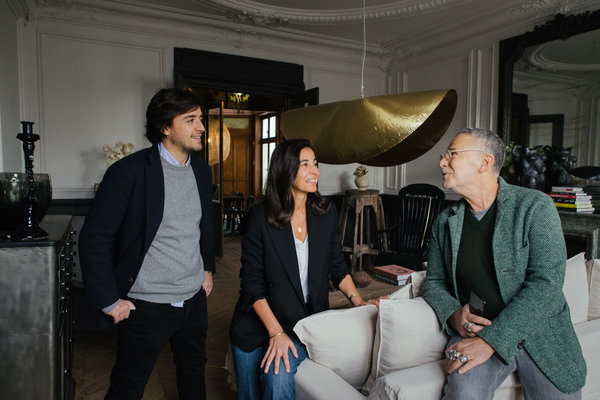 PARIS — Is the concept store over as a, well, concept?

“What is a concept store? Personally, I don’t know any,” said Arthur Gerbi, the president of Merci, a multibrand, multicategory store founded in 2009 and labeled by everyone, back in the era of the now-closed Colette, as Paris’s “other” concept store. “To me, a store is a reflection of the people who work there. I believe in the edit, the eye, the curation.”

It may sound like semantics, but as its 10th anniversary nears, Merci is focused on redefining what, exactly, is the retail experience. This month, it is doing a slow reveal of an annex called, simply, “the apartment.” It’s not so much a place for commerce as a way of being: It will be about “discovery, sharing, pleasure,” Mr. Gerbi said.

It has been germinating for a decade, and took the past two years to blossom.

Ever since its successful pop-up experiment in a house in Montmartre in 2017 (a partnership with the lifestyle website My Little Paris), the Merci team had been thinking about a way to expand its own lifestyle philosophy.

“That was a really interesting exercise in style, because it was a store but it was also a living space,” said Daniel Rozensztroch, Merci’s artistic director, who quickly redecorated the three-floor house top to bottom. “It gave us a chance to show what we’re all about in a place that’s as real as possible.”

After combing the Paris real estate market for another location, Merci finally found a two-bedroom pied-à-terre in a building next door to the original store on Boulevard Beaumarchais, a sprawling three-level industrial space not far from Place de la Bastille. The apartment, built in 1870 at the end of the Second Empire, was dilapidated, Mr. Rozensztroch said, but the first time he saw it he knew Merci had discovered a second home.

“It wasn’t practical but it had incredible charm,” he recalled.

He told Mr. Gerbi not to touch a thing and, borrowing from the Japanese aesthetic of wabi-sabi, or acceptance of the imperfect, went about filling the cracks throughout, pouring cement where terra-cotta tiles were missing in the kitchen and calling on artisans to restore the hand-painted panels and marred woodwork in the dining room or to mend broken parquet flooring with brass patches.

Original features, like the stained glass in the bathroom, sanded glass windows in the dining room, the fireplaces and quirky closets were left alone. He brought in furniture that included flea market finds from the 1950s, such as green Italian glass chandeliers, an oak wardrobe with sliding doors and industrial chairs. A Paola Navone brass suspension lamp hangs over the couch.

“Doing something new with something that already exists is a spirit,” Mr. Rozensztroch said, pointing to a Windsor-style rocking chair that he picked up, damaged, for 40 euros ($46) at a Tokyo flea market and had patched with brass by artisans in Eindhoven in the Netherlands.

“To me, it’s a matter of decency and courtesy,” he said. “Doing whatever you want just because you have the money and privilege is out, passé. You can live so well when you have another appreciation of things.”

Merci may pitch itself as an approach to life (and some revenue has always been used to support charities in Madagascar) but it is still a retail environment: Everything that isn’t nailed down will be available for purchase. Mr. Rozensztroch is planning for the décor to “evolve by stratification” into something fresh every three months or so. Visits are by appointment, and will be handled individually until an online reservation system is created. As Mr. Gerbi cautioned, it’s not like you can show up and just breeze through with a stroller.

During a recent visit, Mr. Gerbi conceded that exactly how the new space will come to life was still a work in progress. For the moment it is reserved for friends and friends-of-friends: It’s a place where a chef might take up residence for private dinners, or where design students might gather for conferences (There were no immediate plans to charge such groups).

Or, added Valérie Gerbi, Merci’s fashion director (and Mr. Gerbi’s sister-in-law), it might become a showcase for new talent. “Lots of young designers need help breaking out,” she said. “What interests us are things that exist in parallel to the classic framework. There’s a whole new generation out there and we want to help them show what they can do.”

Said Mr. Gerbi, “Merci will always aim for authenticity with an element of surprise. I like the idea of infinite interpretation. It’s a state of mind.”