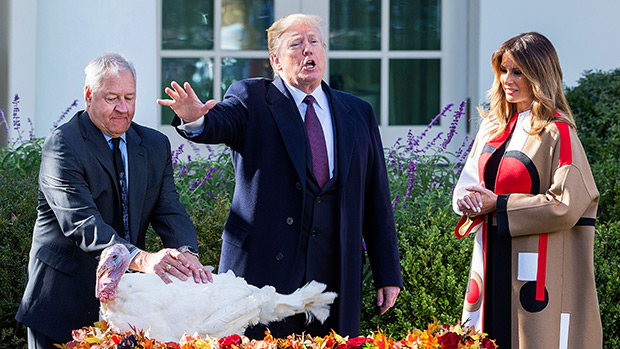 The birds were the stars of the White House Turkey Pardon, but they had some competition from Melania! See her coat, and the hilarious tweets about her looking like the turkeys!

First Lady Melania Trump marked her second White House turkey pardoning by wearing a brown coat decorated in a geometric print, a departure from her getup in 2017. While she looked gorgeous, as always, the outfit was a little… unique. In fact, some on Twitter thought it was a little too similar to the guests of honor, Peas and Carrots. Yes, they thought her coat resembled the turkeys themselves! And, you know what? They’re not wrong.

When the coat is closed, the red circles and long rectangles kind of resemble a turkey’s distinctive red beak and wattle. Oops! Combined with the brown color, It was just a little too similar for anyone’s taste. Of course, the jokes started rolling in on Twitter. “Melania at this turkey pardoning looking like she’s just waiting to hear her own name,” @FeministaJones tweeted. “Watching trump at turkey press conference. Is it just me or Is Melania trying to compete with Peas & Carrots with the coat she is wearing?” @cotey_mary wrote. Some quipped that she was dressed that way so that her husband would pardon her, too!

Last year, Melania rolled up in an autumn-inspired outfit that inspired some divided opinions. For the record, HollywoodLife is on Team Melania for this one. The outfit consisted of a burnt orange turtleneck sweater, a high-waisted brown skirt, her signature, massive heels, and a brocade, floral longline coat. Sure, some people likened the coat to Kim Kardashian‘s infamous “couch” dress from the Met Gala that one year, but she made it work.

Her 2018 outfit is refreshing, considering the hella weird sartorial choices she’s made in the past few months. Her truly terrible trip throughout Africa was filled with bizarre outfits, including, of all things, a f**king pith helmet during a safari. Even without the racial politics that come with wearing the helmet, she looked like an extra in Jumanji. Then, there was this getup that she donned in Egypt, which was extremely “undercover nazi trying to steal the holy grail from Indiana Jones and his dad.”