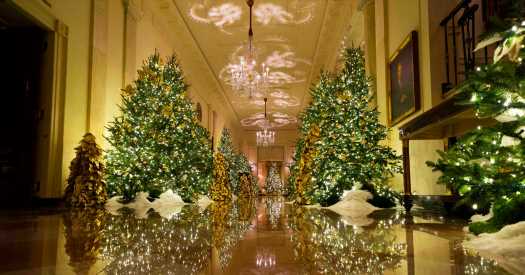 You know the holiday season has officially begun when the White House segues from pardoning the Thanksgiving turkeys to unveiling the Christmas decorations. If the bird is the responsibility of the commander in chief, the interior design is that of the first lady, and so, on Monday morning, Melania Trump’s office released the photos of this year’s makeover.

They include numerous pics relating to the theme, “The Spirit of America” a “tribute to the traditions, customs, and history that make our Nation great,” according to the announcement: close-ups of the “Gold Star Family tree” (decorated by Gold Star families), the stars and stripes ribbons and ornaments trimming the fireplace of the East Room, and the mini-White House Advent calendar in a window of the Green Room (among other sparkly additions).

So far, so festive. They really are.

What they do not include, however: a portrait, or even a quick snap, of the first lady beaming merrily (or not) amid the glittering greenery. Nothing, in other words, like last year’s portrait of Mrs. Trump walking in seeming bedazzlement down the East Colonnade flanked by blood-red topiary trees, the one that spurred a thousand memes and comparisons to “The Handmaid’s Tale.”

Instead, the only shot featuring the first lady in this year’s round is a picture of her … back.

Given the scrutiny paid to Mrs. Trump’s every official appearance; given the reaction to her photo last year; given the fact that the last time a photo of her back made news, it was when she was wearing a jacket with a certain message on it, it could not have escaped her or her office that whatever choice was made would be forensically examined.

Which makes it particularly striking that the only picture released of the first lady is one in which she is striding away.

Especially because there were probably other options, at least for the White House (not for anyone else — the general press call took place on Monday at 5:30 a.m., and Mrs. Trump was not present).

The picture mimics a moment from a video the White House released Sunday evening of the first lady touring the decorations, opening Day 1 of the Advent calendar, marveling at the lights and the firs, sprinkling a few snowflakes on the branches of a tree.

Though her face is really visible in only one shot, when she is walking into a room, and though even in that one her attention is focused elsewhere; though the rest of the time, her face is largely hidden by her hair as she bends down to examine details of the looks, a re-creation of any of these actions for a still could have demonstrated deeper engagement with the event.

Instead, there she is, walking away from the camera. She is wearing a cream-colored coat, draped capelike, as is her wont, over her shoulders, and matching high-heeled Louboutin shoes, recognizable from their red soles.

Her face and arms are hidden, sleeves flapping empty at her sides. She may have to go through the motions, but she doesn’t have to stay for everyone’s judgment. She is exiting the scene.

It’s not exactly “I really don’t care, do u?” but it’s not what one might call welcoming.

Of course, perhaps the photograph was not meant like that. Perhaps it was meant as a way to defuse the situation so that she wouldn’t be caught off guard the way she was last year. Perhaps she didn’t want to draw attention away from the decorations themselves. Perhaps she is feeling, “I just can’t win.”

Perhaps the cream coat (an odd choice of garment to wear in a grand house where presumably there is heating, but maybe she wanted it for protection) is a gesture toward the white dove of peace, or a suggestion that it is time to wipe the slate clean.

Perhaps it is a nod to the white dress she wore for her first official Christmas, in 2017, which spurred comparisons to an angel. Perhaps it is a symbol of the fact that the year — and the decade — are on their way out. These are all possibilities.

And yet, given Mrs. Trump’s history of ambivalence with her role; given that, as The New York Times reported, according to Kate Bennett’s new unauthorized biography, “each thing she does has meaning to it, even the clothing she wears”; given that she knew these pictures were going around the world, and round the social media universe; and given that the choice of photo was under her office’s control, it is hard not to think that, while this may be the season of giving, the message is that she’s not giving anything away.