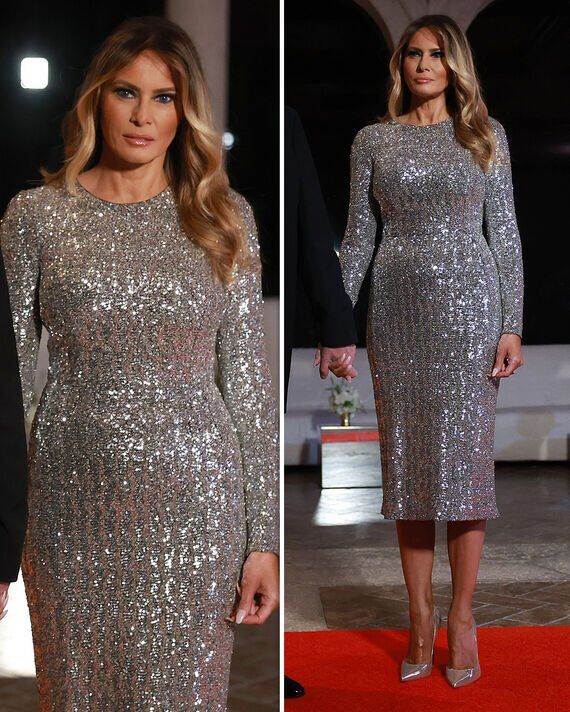 Melania and Donald Trump attended a New Year’s Eve event on Saturday, December 31, at the former president’s Mar-a-Lago home. The couple has hosted New Year’s Eve parties at the property in the past, often inviting familiar figures.

This year, the high-profile figures to attend the event were from the former president’s political orbit, such as Dick Morris, Rudy Giuliani, and Mike Lindell.

Mr Trump’s second-oldest son, Eric, and his wife, Lara, were at the party too. Ivanka, though, did not appear to be there.

Melania was on her husband’s arm and looked glowing in a sequin dress by Italian fashion house Dolce & Gabbana.

The dress was figure-hugging and featured long sleeves and a round neckline.

It reached just below Melania’s knees and seemed to be the Sequined Calf-Length Dress, available on the designer’s website for £1,800.

Describing the dress, Dolce & Gabbana said: “Brighten up your looks with this sheath dress featuring all-over silver sequins. A look with infallible personality is guaranteed.”

The garment was also described as a sequined stretch nylon mesh dress on fashion website SSENSE.

Other features included a zip vent at its cuffs, a concealed zip closure at the back, and a partial silk-blend satin lining.

Melania matched the dress with a pair of shiny, silver heels, and bare legs.

Her dyed blonde hair was tousled in loose waves and she wore her usual make-up of coloured-in brows, dark eyeshadow, black eyeliner, and black mascara. Her lips shined with gloss.

On first glance, Melania’s dress seemed uncontroversial, but Dolce & Gabbana has made headlines in recent years due to scandals.

In 2018, one of the brand’s campaigns was accused of racism as it depicted an Asian model attempting to eat Italian food with chopsticks.

Back in 2015, the founders caused uproar as they spoke out against same-sex parenting. Dolce described children born through IVF as “children of chemistry, synthetic children”.

Since, some high-profile celebrities have distanced themselves from Dolce & Gabbana.

The former first lady is known for her conversation-starting fashion choices – back in June 2018 she donned a $39 (or £32 at the time of writing) army green jacket from Zara with the words “I really don’t care, do u?” on the back.

The garment caused uproar on social media as Melania wore it to a shelter for migrant children in Texas.

However, when she convened with Stephanie Grisham, former White House press secretary, following the incident, Melania said it was just a jacket.

This is what Stephanie told the public too, saying: “It’s a jacket. There was no hidden message. After today’s important visit to Texas, I hope the media isn’t going to choose to focus on her wardrobe.”

But Mr Trump wrote on Twitter at the time: “’I REALLY DON’T CARE, DO U?’ written on the back of Melania’s jacket, refers to the Fake News Media. Melania has learned how dishonest they are, and she truly no longer cares!”

In an interview with ABC News at the time, Melania herself mentioned the jacket too. She explained: “It was for the people and for the left-wing media who are criticising me.”