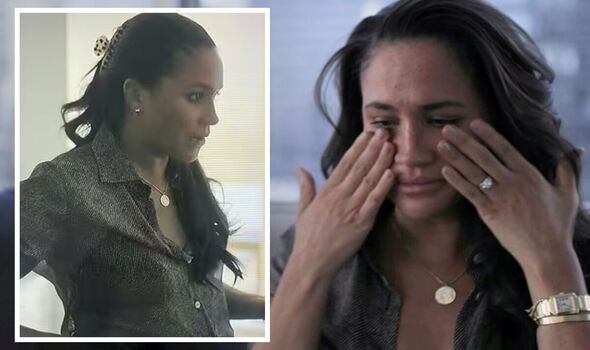 A scene in Meghan Markle and Prince Harry’s documentary showed the couple sitting in a meditation session which saw them break down in tears at one point. The Duchess of Sussex wore a very special necklace for the session.

Meghan opted to wear her “Love Pendant” by the designer Sophie Lis, which costs £295. The pendant was inspired by a 1907 piece by Lyonnais designer Alphonse Augis.

Earlier this year, the Duchess was seen wearing this gorgeous pendant to the Invictus Games, but she was first spotted wearing it around her neck in March 2020 during a trip to London’s National Theatre to raise funds for the Wild at Heart Foundation, a global dog rescue.

Ms Lis reportedly sold out hundreds of versions of the necklace after the Duchess was seen in it back in 2020.

However, it wasn’t until the recent trip to the Invictus Games that the pendant was widely publicised.

In English, this translates to: “For, you see, each day I love you more, today more than yesterday and less than tomorrow”.

The description continued: “The pendant symbolises eternal love and reflects the poem with a + in diamonds and a – in rubies.”

There is a lot of history behind the “Love Pendant” that Notting Hill-based Ms Lis has translated into 22-carat gold vermeil (gold plated silver) with a diamond halo.

It is inspired by a famous pendant and a legendary poem. The version Meghan wore is a rebus.

This means a puzzle with words or letters and motifs that create the meaning of an ornamental piece.

The words on the pendant say “Qu’heir” and “Que Demain”. In English, this translates into “more” and the inscription reads “than today” while the ruby minus sign signifies less, with the words “than tomorrow”.

The “Love Pendant” that the Duchess wears is on the Sophie Lis website, where it is described as “a symbol of ever-growing love”.

A total of 10 percent of each sale goes directly to the Wild at Heart Foundation. By wearing this pendant on several occasions, Meghan has helped with a charitable cause that is dear to her heart.

It is also the type of sentimental or symbolic jewellery to which the Duchess of Sussex seems to be drawn.

Other pieces of sentimental jewellery that Meghan wore during this scene were Princess Diana’s Cartier watch and her engagement ring.

The Duchess of Sussex added a touch of glitz to her ensemble with her late mother-in-law Princess Diana’s £17,800 gold Cartier Tank watch.

The Tank watch, once owned by Princess Diana and thought to be gifted to Meghan by Harry, was priced at £17,800 at the time but is now likely worth a lot more given its history.

It is one of the pieces sported by Meghan. The elegant timepiece was worn by Diana on a number of occasions, including a 1997 visit to London’s Shri Swaminarayan Mandir Hindu Temple and an engagement at the British Lung Foundation that same year.

She could also be seen sporting her £271,000 engagement ring from Prince Harry. This jewel was originally designed by Prince Harry and court jewellers Cleave and Company using one stone from Botswana and two smaller stones from Diana’s collection.

To accompany these pieces of jewellery for her meditation session, Meghan wore a grey buttoned blouse with a wide collar and pinstripe trousers in the same colour.