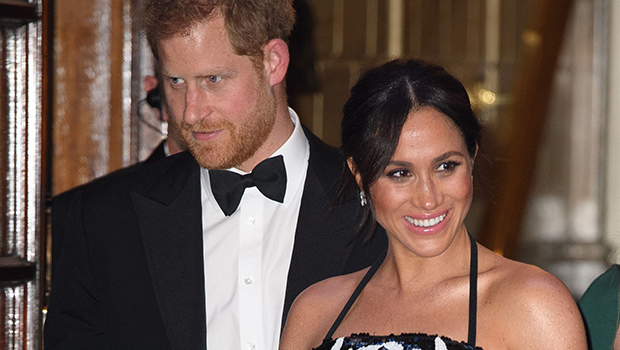 Meghan Markle stole the show at the British Fashion Awards during a surprise appearance. She wore a gorgeous one shouldered black gown while rocking her baby bump and we’ve got the pics.

Meghan Markle made a surprise appearance at the British Fashion Awards on Dec. 10 and she managed to upstage an audience of stylish models and designers with her incredible gown. The pregnant Duchess of Sussex rocked a black figure-hugging one shoulder black gown to present the award for British Womenswear Designer of the Year to her very own wedding dress designer Claire Waight Keller of Givenchy. The 37-year-old is approximately four months along but her baby bump appears to have really popped, as it’s far bigger than her last appearance in an evening gown at the Nov. 19 Royal Variety Show appearance. She made sure to tightly cradle it with both hands as Claire gave her acceptance speech. CLICK HERE TO SEE THE PICS.

Meghan’s dress featured one shoulder strap on the left of her gown while the other remained bare. There have been reports that Buckingham Palace has advised her to dress “less Hollywood” and “more royal,” but former Suits actress Meghan continues to style herself to the beat of her own drum. Her gorgeous gown would have looked right at home at an Oscars ceremony and she managed to outshine many of the top models in the audience who killed it with their own unique style. She wore strappy open-toed gold high heels which showed under the front knee-high slit of the gown as she strode onstage.

Claire even praised Meghan while giving her acceptance speech. She told the audience at London’s Royal Albert Hall, “This woman is so amazing. I got to know Meghan on such a personal level. To have someone like that trust you on such a personal moment in their life…I can’t thank you enough because it was the most beautiful moment.” The Duchess’ simple yet elegant white wedding gown to Prince Harry on May 19 featured a bateau top, three-quarter length sleeves and a small train.

Pregnant Meghan’s appearance had been unannounced so it came as a surprise to the audience. It included Victoria Beckham — who was up against Claire for the prestigious awards — and her husband David, Kendall Jenner wearing a nipple and thong flashing see-through gold sheath, Kaia Gerber and mom Cindy Crawford, Rosie Huntington Whitely, singer Rita Ora and actress Rosamund Pike.