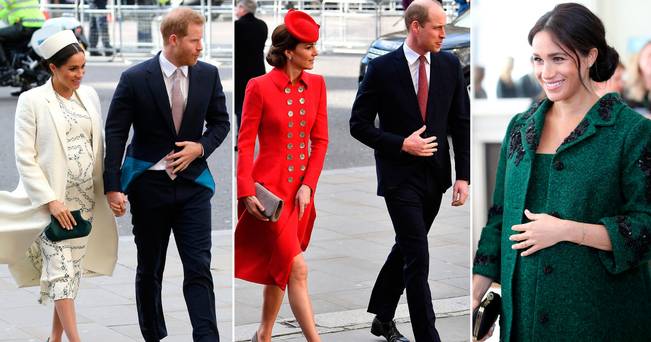 If there’s one theme of 2019 for Britain’s royal family, it’s burying the Kate vs Meghan narrative of last year.

Since the former Suits star (37) married into royalty last May, the inevitable comparisons were made between the two duchesses and their contrasting styles – informed by entirely different life experiences – before it came to a head in the second half of 2018 amid persistent reports the two were feuding. A show of unity on Christmas Day seemed to do the trick and put paid to the rumours, which are truly a thing of the past after two joint appearances in the last week alone.

The Duchess of Cambridge and husband Prince William, led the senior royals, including the Duchess of Sussex and Prince Harry, Queen Elizabeth, Prince Charles and Camilla, but it was Kate and Meghan that stole the show, as usual. Kate recycled a Catherine Walker coat with oversized buttons she first wore in New Zealand in 2014, while Meghan had her second event of the day and a quick-change to reflect the more formal dress code required.

After dazzling in a custom Erdem coat at Canada House, a fitting engagement given her strong connections to the country, she opted for a white chain print dress by pal Victoria Beckham, a white pillbox hat and a pair of emerald green satin heels. Her commitment to four-inch heels while nearly eight months pregnant will be familiar to royal watchers, but her insistence at bending down to speak with children – while cradling her large baby bump and towering in high heels, is earning her new fans. Commonwealth Day is traditionally marked by a service at Westminster Abbey, led by the British monarch, also including other senior royals and figures from national life on the guestlist.

In her message to mark Commonwealth Day, the head of state has praised how the family of nations inspires its member states to find ways of protecting the planet and its citizens. Millions of people are “drawn together” because of the collective values shared by the institution, Queen Elizabeth said in her address to the 53 countries of the Commonwealth.

Last week, Meghan revealed she didn’t read the negative comments about her in a panel discussion with Anne McElvoy, senior editor of ‘The Economist’, on International Women’s Day, when she was asked how she responded to newspaper headlines describing her feminism as “trendy” and whether it was “water off a duck’s back”.

“I don’t read anything, it’s much safer that way, but equally that’s just my own personal preference, because I think positive or negative, it can all sort of just feel like noise to a certain extent these days, as opposed to getting muddled with that to focus on the real cause,” she said. “So for me, I think the idea of making the word feminism trendy, that doesn’t make any sense to me personally, right? This is something that is going to be part of the conversation forever.”

When asked later if she looked at Twitter, she replied: “No, sorry, no. For me, that’s my personal preference.”