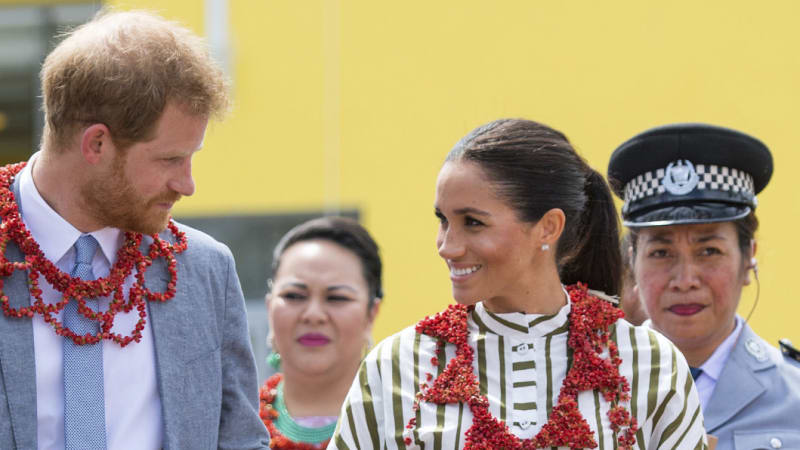 The Duchess of Sussex had been shining a spotlight on local designers during her tour of the Pacific, but, since leaving Australia to tour Fiji and Tonga, her wardrobe had become not unlike that of your standard Hollywood actor.

She toured Fiji in Jason Wu (a US brand), Figue (a US brand) and Safiyaa (a UK brand), and touched down in Tonga yesterday in a red number by Self-Portrait (a UK brand, as the tag captured in so many pictures would have revealed). 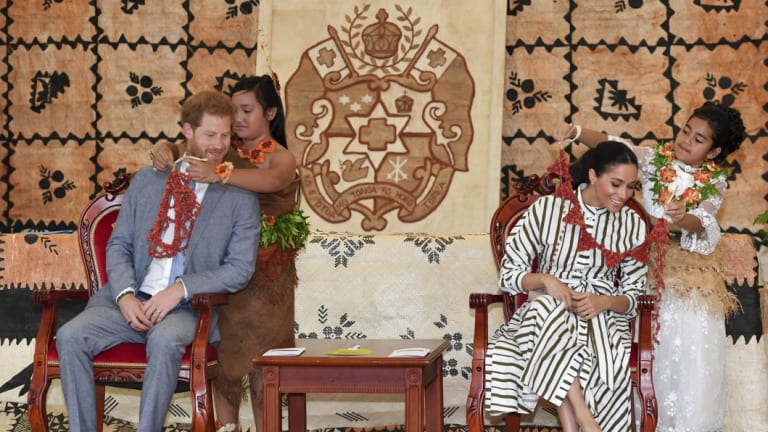 Britain’s Prince Harry and Meghan, Duchess of Sussex are given flower garlands at the Fa’onelua Convention Centre in Nuku’alofa, Tonga, on Friday, October 26, 2018.Credit:AP

However, that changed on Friday, when Meghan and Prince Harry visited an exhibition of local Tongan artisans.

The couple were up early on Friday morning to meet with the prime minister of Tonga, 'Akilisi Pōhiva, before they were accompanied by Tonga's Princess Angelika Lātūfuipeka to the exhibition. 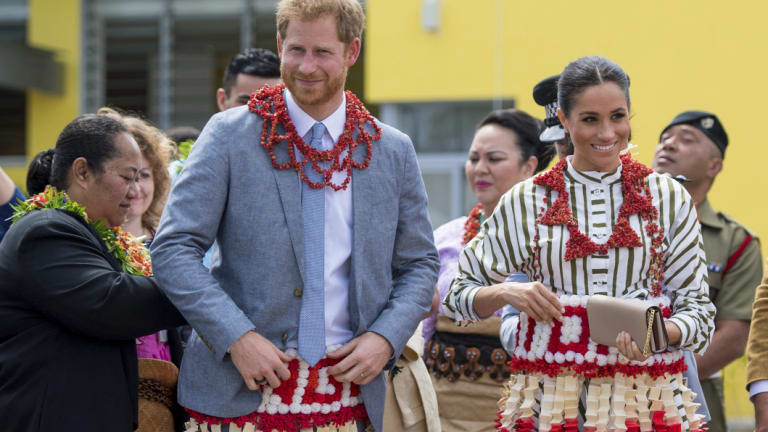 Britain’s Prince Harry and Meghan, Duchess of Sussex wear a ta’ovala, a traditional Tongan dress wrapped around the waist, at the Fa’onelua Convention Centre in Nuku’alofa, Tonga.Credit:AP

There, two young girls tied necklaces made from Fa and Puatonga, powerful smelling native flowers, tied around the royals' necks.

The royals then donned traditional skirts known as a "ta'ovala". Worn on top of a person's outfit, the skirts are worn by high-ranking individuals to demonstrate a need to show respect.

The dress, from Grant's Spring/Summer 2019 collection, retails for $1595. She previously wore one of Grant's designs for a meet and greet on Sydney's Bondi Beach last week.

She paired the dress with olive green suede heels.

Eagle-eyed royal watchers noticed Meghan appeared to not be wearing her engagement ring during the visit, with some social media users speculating it could be due to her hands swelling during pregnancy.

The couple announced they were expecting their first child in a statement last week, shortly after their arrival in Sydney for the start of their Pacific tour. The baby is due in the northern spring.

Later in the day, the duchess changed into a blue dress by US designer Veronica Beard to visit boys boarding school, Tupou College, and the nearby Toloa rainforest. 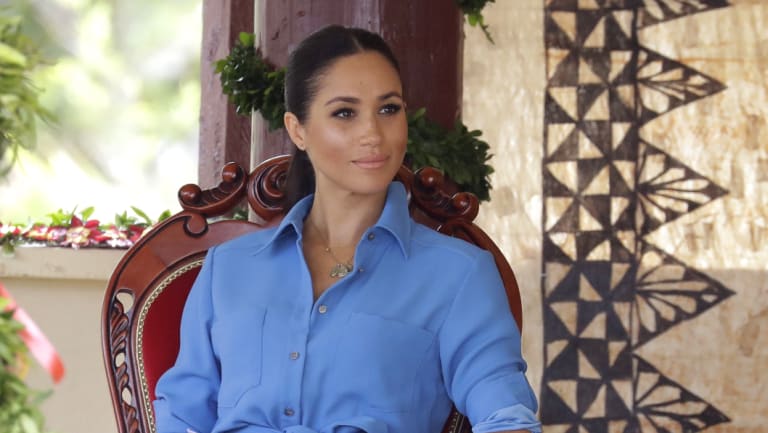 Meghan, Duchess of Sussex smiles during a visit to Tupou College in Tonga.Credit:AP

This is the royals' final day in Tonga. They will fly to Sydney again tonight, before finishing their tour in Auckland on October 31.