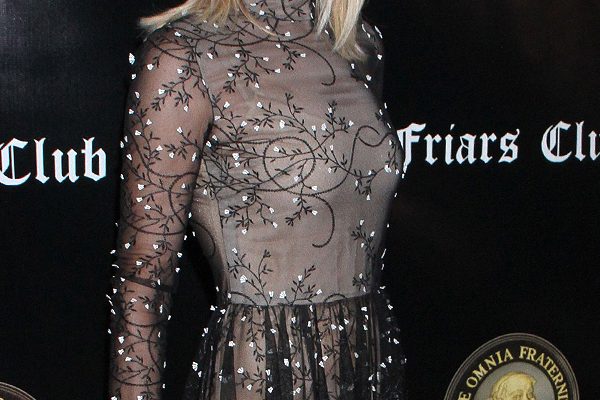 Meg Ryan was all smiles on the red carpet Monday night.

The 56-year-old actress swung by the Friar’s Club in New York City, where her When Harry Met Sally costar Billy Cristal was being honored with the Entertainment Icon Award.

It was the first public appearance for Ryan since news broke that she and singer John Mellencamp, 67, were engaged.

Her diamond engagement ring was on full display too, the shining sparkler sitting on a solid gold band.

Ryan also wore a long-sleeve sheer Roland Mouret gown with a high neckline, fitted bodice, flowing skirt and delicate embroidery. She paired the gown with other diamond jewelry (including hoop earrings, a bracelet, and flower ring) and wore her blonde locks down. She also wore a thin diamond band with her engagement ring.

An excited Ryan shared the news on her engagement to Instagram on Nov. 8, writing “ENGAGED!” next to a sweet and silly cartoon drawing of she and Mellencamp reaching for each other’s hands.

Hours earlier, photos surfaced of her out and about in New York City wearing an engagement ring while talking on the phone as she headed to a salon.

Ryan and Mellencamp first dated for three years before calling it quits in August 2014.  At the time of their split, a source told PEOPLE that “distance” had led to the relationship’s demise.

The couple rekindled their romance in May 2017, a source telling PEOPLE, “They have a bond.“

Throughout it all, the two have kept their romance mostly private. Their most public outing was on Christmas Day 2017, when they caught a New York Knicks basketball game with her son Jack Henry, 26 (from her 10-year marriage to actor Dennis Quaid), and his son Hud, 24 (from his nine-year marriage to model Elaine Irwin).