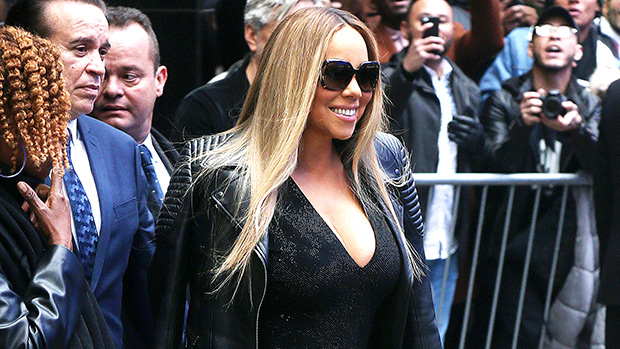 Mariah Carey is rocking her best body in years and is flaunting it as much as possible. She killed it leaving a ‘GMA’ appearance in a cleavage baring black top and skin-tight black pants.

Mariah Carey is looking slimmer than ever and is loving every minute of showing off her killer body. The 48-year-old is not a morning person so she had to rise and shine extra early for a performance on Good Morning America on Nov. 19. Considering how flawless she looked with hair and makeup as well as her outfit, she must have had a really early wake up time. Mimi crushed it with her style, bringing hotness to the AM hour in a low-cut sequined top that she paired with a black leather motorcycle jacket slung over her shoulders. The songbird can never get enough of flaunting her cleavage and she’s not about to stop at eight o’clock in the morning.

Mimi showed off her incredible weight loss with a pair of skin-tight, low slung black pants. While the singer is thin, she’s still maintained her curves including a booty that’s pretty darn perky for a woman two years shy of turning the big 5-0. She wore high-heeled lace up mules with an open toe and completed her stunning look with pin-straight long hair and black sunglasses.

Mariah was on GMA to perform her new song “With You” from her upcoming album Caution. She wore the same outfit she was photographed departing their New York studios in, just adding the jacket for some extra style points. She’s doing a quick blitz of publicity in the Big Apple in support of Caution, and later in the day headed off to shoot Bravo’s Watch What Happens Live with Andy Cohen. Which will be EPIC!

Mimi’s WWHL appearances always end up turning into massive shade fests towards other artists thanks to the juicy gossip digging games Andy has his guests play. In past appearances the diva has dissed Demi Lovato, Ariana Grande,,Eminem, Jennifer Lopez and her former fellow American Idol judge Nicki Minaj. When Andy had her play Plead the Fifth during a May of 2016 appearance he asked her to say three nice things about Nicki, who she famously clashed with. Mariah took a long pause and refused to give an answer. Well, if you can’t say anything nice about someone, the best thing is to not say anything at all.