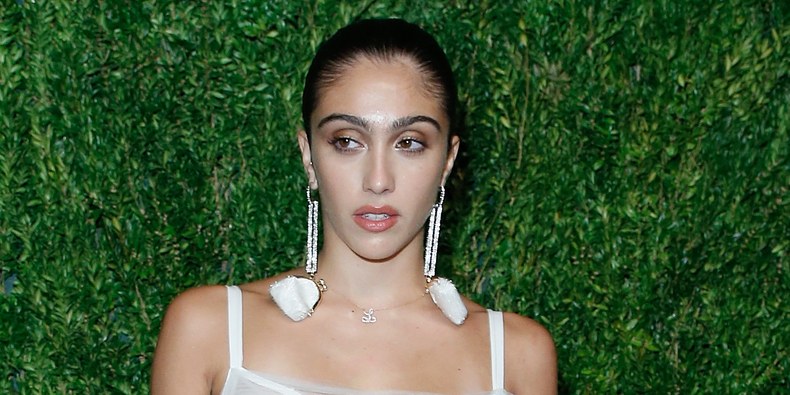 Lourdes Leon is following in the Rebel Heart footsteps of her mom, Madonna. The 22-year-old, who has become a Gen Z style icon, opted for a bold look at this year’s CFDA/Vogue Fashion Fund Awards: a white Luar dress that may have shocked the standards department over at Instagram and has many recalling her mother’s infamous wedding dress from the 1984 MTV VMAs.

She stunned in the gauzy white outfit that revealed her sheer bra underneath. Leon accessorized with earrings that dangled matching white coin purses, a snakeskin bag, and a necklace with the letter “L,” for her name. Her #FreetheNipple moment is her second fashion one of the year. This past fall, in September, Leon made her runway debut as a model for Gypsy Sport, wearing a seashell bra and shredded jeans with unshaved legs. Leon’s appearance at the CFDAs was just as memorable and distinguishing; though she doesn’t make many public appearances, she’s choosing them wisely and forging her own path as an indie fashion darling.

While Leon hasn’t commented on her #FreetheNipple appearance, this isn’t the first time a celebrity has used a CFDA function to make a strong statement, both feminist and fashion-wise. Rihanna did as much in a sheer, sparkly Adam Selman creation during the main CFDA Awards back in 2014. After she wore that iconic gown, she became the poster woman for the #FreetheNipple movement, with support from Demi Moore and Bruce Willis’s daughter Scout Willis. Rihanna tweeted at the time “FREE THE NIPPLE.”

But back in 2016, she told Vogue that her political statement wasn’t exactly planned. “I have always freed the nipple,” she said. ”It was never to get attention. Never sexual. Never in desperation. The bra just fucked up my sheer shirt. I just wanted to be perfect and that’s what I went with and I felt okay with that. And after a while, it became such a scandal and a ‘horrible role model’ thing. It was a topic of discussion, and eventually other girls started defending me. And now there’s this whole ‘Free the Nipple’ movement.”

The Luar designer Raul Lopez hasn’t commented on Leon’s look yet either, though he did give a statement on his Instagram Stories after the ceremony. “I didn’t win, but I feel like a winner, and that’s what counts,” he said. “One door closes and 30 open. I feel like a champ. [I’m] happy for this experience for the culture.” Winning title or not, Lopez and Leon emerged victorious from the CFDAs in another way: having one of the most-talked about looks of the night.