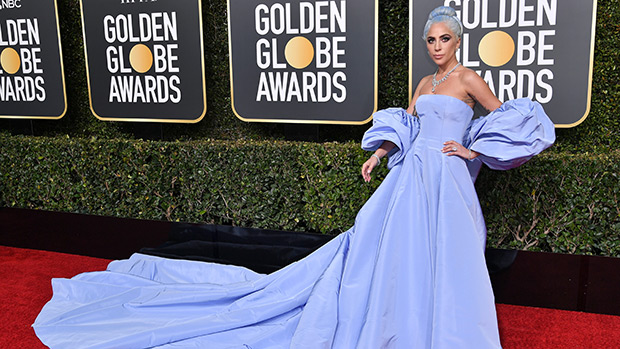 A Star Is Born, indeed! Lady Gaga looked absolutely gorgeous at the 2019 Golden Globes on January 6. See photos of her dress in all its glory below!

Lady Gaga, 32, is going to have one heck of a 2019! The A Star Is Born actress and singer is already the darling of awards season! At the 2019 Golden Globes, she wore a larger-than-life Valentino Haute Couture periwinkle gown and just, WOW. It took multiple people to help her down the red carpet with that magnificent train. She is the BEST at making a moment happen. She wore her blue hair up in a chic chignon and looked like Cinderella. Her hair was styled by Frederic Aspiras. Her stunning makeup was done by artist Sarah Nicole Tanno, who used Marc Jacobs Beauty for her gorgeous look.

The show was held on January 6 at the Beverly Hilton Hotel. Of course, Gaga had a front row seat since she is expected to win! She knows exactly how to bring just the right amount of drama and class to the red carpet! Along with her amazing dress, she wore a stunning, GIANT diamond necklace from Tiffany. We can’t wait to see all of her outfits through awards season!

Gaga actually took home a trophy in 2016 for best performance by an actress in a limited series for her role in American Horror Story: Hotel. Good luck to her tonight!