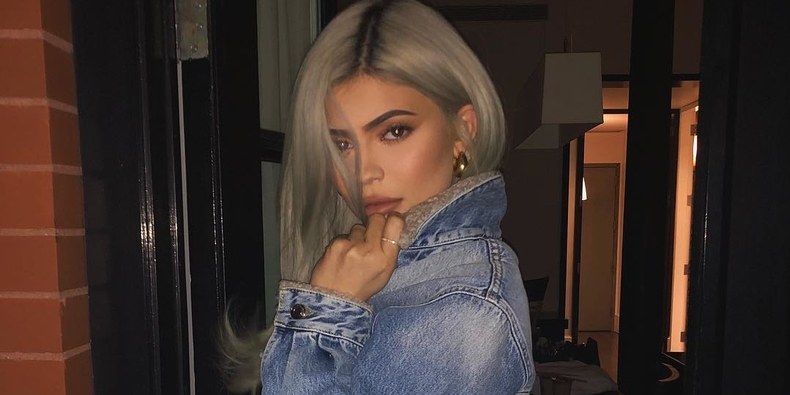 Kylie Jenner arrived in New York earlier this week, and she has since been seen at various locations around Manhattan in various painted-on trousers. There was a pair of red velveteen pants and some black lacquer drain pipes, to start; she wore them to attend the two nights of boyfriend (and “hubby”) Travis Scott’s Astroworld tour at Madison Square Garden. Scott has since departed for Washington, D.C., but Jenner has remained in New York, and the latest iteration of her look of choice, seen Thursday, is actually a skintight denim jumpsuit.

Jenner wore the look, by Iro Paris, while out in Soho on Thursday night. With a zip-up front and sherpa collar, as well as its snug silhouette, it has garnered comparisons to Britney Spears and Justin Timberlake’s iconic 2001 American Music Awards ensembles of coordinating Canadian tuxedos. But what Jenner really seems to be channeling with this look is 2014 Kim Kardashian—thereby completing her metamorphosis into her elder sibling, or something like her.

Kylie Jenner has always been the Kardashian most closely modeled in Kim’s image—both in terms of her penchant for waist trainers and lip fillers and her business acumen. And now, apparently, in terms of her affinity for a head-to-toe denim look, borrowing what was once a go-to look of her sister. Kim went through a distinct Canadian tux phase, wearing a chambray button-down over skinny jeans with a blush-pink coat in 2013 (thank you, canadiantux.com), a similar look, but tucked in, in Paris with Serena Williams in 2014, and a denim bra top and skirt—kind of like a mermaid-y take on a Canadian tux—in 2015.

Jenner is also having a denim moment of her own: She and sister Kendall Jenner released a denim line as part of the latest drop for their label, Kendall + Kylie, earlier this month. Kendall is also a fan of the all-denim look. (Whomst among us cannot claim they went through a denim-on-denim phase, however brief?) Plus, that family really loves their Calvins.