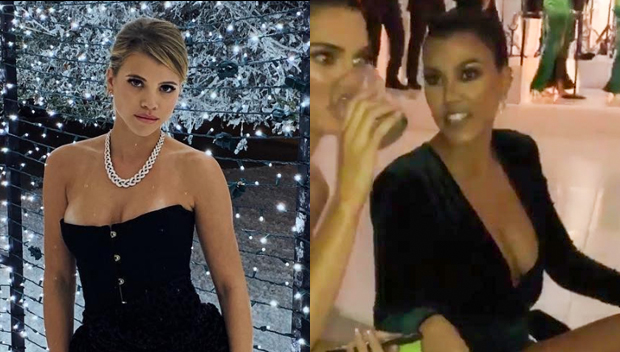 Showing up to the same party in (basically) the same dress shouldn’t be awkward for Kourtney Kardashian and Sofia Richie, after they took a bonding trip to Mexico just the day prior!

Kourtney Kardashian, 39, and Sofia Richie, 20, changed from bikinis to black dresses for Kim Kardashian’s Christmas Eve party in Calabasas, Calif., after just being spotted in Mexico on Dec. 23! Unlike the trip in Cabo San Lucas, the two weren’t photographed together at the holiday bash, but still matched in dresses that were both black and bared major leg. See the pictures below! Sofia’s appearance at a Kardashian function is a clear sign that there’s no awkward tension between her and Kourtney, even though Sofia’s dating the Keeping Up with the Kardashians star’s ex and baby daddy, Scott Disick!

But we’re not surprised. The trio, along with Kourt and Scott’s three kids Reign, Mason and Penelope, took a trip to Cabo San Lucas before the party, and looked like one big happy family. In their first ever pictures together that the public has seen, Scott’s current girlfriend and ex lounged by one another like a pair of BFFs! They later took a stroll with Scott and the kids along the beach, and even had dinner together afterwards. Of course, Scott poked fun at the potentially awkward situation, posting a photo of him smack-dab in the middle of Kourtney and Sofia with the caption, “What more can a guy ask for. THREE’S COMPANY.” Oh, Scott.

Scott and Sofia were grateful that the family trip finally happened! “Scott had to ask Kourtney’s permission to have Sofia along on the family holiday vacation and he was surprised that she said OK,” a source close to Scott EXCLUSIVELY told HollywoodLife on Christmas Eve. Our source added that “it has been Sofia’s dream to build a better relationship with Kourtney from the beginning and she couldn’t be happier now that they’ve bonded on a whole new level.” Ah, ’tis the season for unlikely forces to overcome all odds and come together.

At the party, Sofia hung out with Paris Hilton, and understandably so! Paris is basically her older sister, who co-starred on The Simple Life with Sofia’s real sister, Nicole Richie. Meanwhile, Kim posted a video of Kourtney chatting with their sister, Kendall Jenner, while John Legend performed inside of Kim’s reimagined “Whoville.”