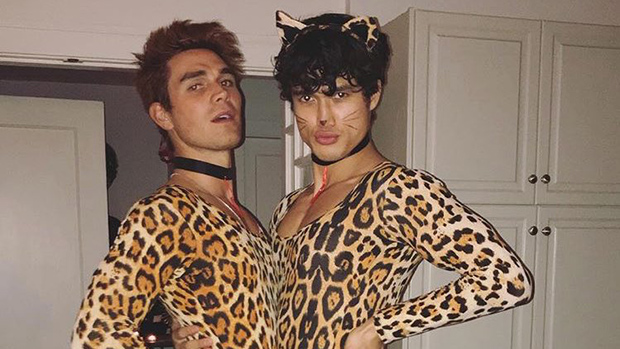 ‘Riverdale’ stars KJ Apa and Charles Melton looked to their own show for Halloween inspiration! See their incredible Josie and the Pussycats costumes!

KJ Apa wins Halloween! The Riverdale star teamed up with his co-star Charles Melton for costumes inspired by the CW show! Their other cast mate Hayley Law tweeted a photo of the pair wearing leopard-print jumpsuits complete with tails, black chokers and cat ears, perfectly emulating the band Josie and the Pussycats from the series. Law captioned the image, “Spoiler alert #riverdale” while Ashleigh Murray, who plays Josie McCoy, tweeted, “Well played @kjapa.”

Apa and Melton aren’t the only Riverdale stars to get in the Halloween fun, though. A video was shared on social media of Cole Sprouse wearing a Minions costume that included fake breasts, which was… pretty weird.

In the clip, Melton could be seen standing behind him as he covered his front with a sign that said “Stop sexualizing Minions.” Yeah, I think we can all get behind that after seeing Sprouse’s horrifying take on the little yellow creatures.

Camila Mendes and Lili Reinhart also joined forces for Napoleon Dynamite-inspired costumes. Mendes rocked a button down shirt tucked into jeans with a bolo tie to be Efren Ramirez‘s Pedro, while Reinhart curled her blonde locks and donned a “Vote for Pedro” t-shirt to portray Jon Heder‘s titular character. Mendes shared a photo of her and her pal in costume on Instagram, captioning the post, “vote for me, and all your wildest dreams will come true.”