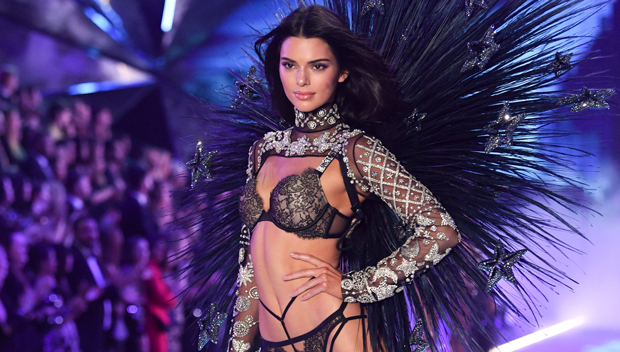 Look who’s back! Kendall Jenner looked absolutely stunning at the 2018 Victoria’s Secret Fashion Show. She clearly hasn’t missed a beat, even after skipping the event in 2017!

Kendall Jenner, 23, was back at the Victoria’s Secret Fashion Show for 2018, and she showed off her incredible figure in sexy lingerie on the runway Nov. 8. The gorgeous model rocked a lacy black bra and underwear combo, along with sheer long sleeves that were covered with silver embellishments to complete the look. She was also given massive black wings to wear she strutted her stuff with a huge smile on her face. For her second look of the night, Kendall wore a red plaid bra, which was paired with a matching skirt. It’s quite a refreshing sight to see her back on this runway, as she didn’t walk in the 2017 show, which took place in China.

Although Kendall never commented on why she decided not to attend the VS Fashion Show in 2017, it was reported by TMZ that her contract with competing lingerie brand, La Perla, did not allow her to model for VS last year. Plus, Kendall has been very open about her anxiety when it comes to traveling and over-working herself, and she actually skipped out on a LOT of Fashion Week events in 2017 due to those issues. With the show being so far away in China, it was probably best for Kendall’s mental health that she didn’t attend anyway.

She was certainly back and better than ever this year, though, and was able to walk on the runway alongside some of her closest friends, including Gigi Hadid and Bella Hadid. Gigi also skipped the show in 2017, as she was reportedly not able to secure a visa to enter the country.

This year’s Victoria’s Secret Fashion Show featured performances from musicians like The Chainsmokers, Halsey, Shawn Mendes, Bebe Rexha, Kelsea Ballerini and more. It will air on ABC at 10:00 p.m. on Dec. 2, so set those DVRs now!