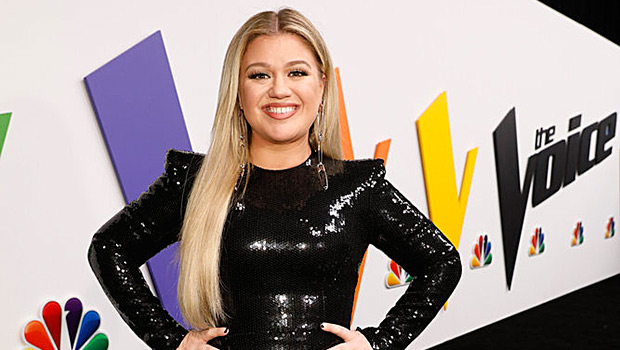 Kelly Clarkson slays once again! She stepped out for the first night of ‘The Voice’ season 15 finale in a sexy black dress that was all about the sequins. Kelly has been a fashion queen all season long!

Yas, Kelly Clarkson, yas! The Voice coach and singer, 36, wowed on the first night of the season 15 finale in a sexy black dress. The long sleeve dress was covered in sequins. This look was super edgy, but we are all for it. Her long blonde hair was super straight for night one of the finale. Work it, Kelly!

Kelly is rooting for her girl Chevel Shepherd, one of the top 4 finalists of The Voice season 15. Chevel is just 16 years old, and Kelly has the opportunity to be the winning coach of back-to-back seasons. She won with teen Brynn Cartelli in season 14, which was Kelly’s first season as a coach. Kelly knows great talent when she hears it!

Kelly has wowed in a number of gorgeous looks over the course of season 15. From a pink metallic gown to sexy little black dresses, The Voice stage has also been Kelly’s runway! “With The Voice she kind of lets me run with it,” Kelly’s stylist, Candice Lambert, told PEOPLE. “I present clothes and ideas for each show to her. We try them on and we go with what we both love the most. Each night we are trying a different vibe. It’s so much fun.”

The American Idol alum will be returning for season 16 of The Voice, alongside fellow coaches Adam Levine and Blake Shelton. John Legend will be taking Jennifer Hudson’s place for season 16. A new winner of The Voice will be crowned Dec. 18 during the two-hour finale event.