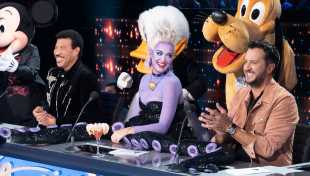 It’s Disney Night on ‘American Idol,’ and Katy Perry got FULLY into the spirit by dressing as Ursula from ‘The Little Mermaid’ — purple skin, tentacles and ALL!

Katy Perry never shies away from going all out with her fashion choices, and she took things to the next level during the live April 21 episode of American Idol. In honor of Disney Night, Katy channeled Ursula from The Little Mermaid to perfection. She dressed in a skintight black jumpsuit that featured Ursula’s infamous tentacles protruding from it. She also wore sheer purple sleeves to get Ursula’s purple skin, and covered her face in purple face paint to really go all out.

To complete her beauty look, Katy wore sparkling blue eye shadow and styled her hair into a blonde mohawk look. Throughout the show, Katy even changed up her voice to sound more like Ursula’s deep tone, but she still kept up her sweet demeanor, rather than acting like the Little Mermaid villain! Throughout the episode, Katy will feedback to the top 10 contestants, who are singing their favorite Disney songs in hopes of earning a spot in the top 8.

Meanwhile, sticking with the Little Mermaid theme, Lea Michele will also hit the stage with the top 10 for a performance of “Under the Sea.” Since Lea is portraying Ariel in the Hollywood Bowl’s upcoming production of The Little Mermaid, she was the perfect choice for the collaboration! Season 16 contestants, Madde Poppe and Caleb Lee Hutchinson, are returning for a duet during Disney Night, as well.

Katy is in her second season of judging on American Idol, alongside Luke Bryan and Lionel Richie. The trio have had a say in the contestants getting this far, but now, it’s all in America’s hands. However, the judges will have one judges save to use during the remainder of the competition, but they must come to a unanimous agreement regarding who to use it on in this episode or the coming weeks.