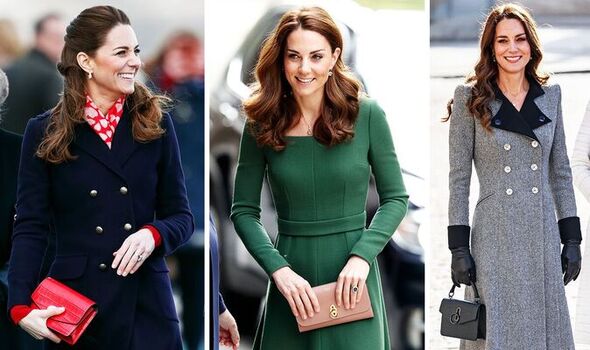 Kate Middleton, 40, is one of the most stylish members of the Royal Family and her fashion is discussed at length all over the world. But what handbags and clutch bags does the Princess of Wales usually opt for?

She has owned the black version of the bag for nearly a decade. Daena Borrowman, the PR, Social and Digital Marketing Manager at jewellerybox, spoke exclusively to Express.co.uk to explain. According to the expert, Kate’s chosen bags are her “fashion staples” which she never goes without.

The style expert explained: “Kate Middleton, The Princess of Wales never fails to make a statement with her fashion staples. Her handbags and clutches are at the forefront of her classical elegant looks on many occasions.”

Daena stated that Kate opts for “London-based designers” for a key reason. These designers come from a huge array of brands, including the brand that made her wedding dress back in 2011.

She added: “Kate’s designer clutch collection heavily consists of London-based designers, ranging from Alexander McQueen to Aspinal of London. Kate is known for wearing her fashion looks on repeat.”

The expert noted that Kate has a “most carried clutch bag to date”, which some royal fans might not have even noticed. Of course, the Princess has used a British designer to follow in the footsteps of the late Queen Elizabeth.

Her Late Majesty always wore British designers in the 1950s and 60s, such as Norman Hartnell who designed her fabulous wedding dress in 1947. But what is Kate’s most carried clutch bag?

Daena claimed: “Kate’s most carried clutch bag to date is her Black Mulberry Bayswater which we’ve seen the Princess carrying while attending over 60 public engagements. The bag is priced at £695 and features an embossed gold-tone turn-key closure at the front.

“This presents a simple style much like her usual fashion looks.” Daena notes that there is another reason why Kate turns to Mulberry as a brand so often for her handbags.

She opined: “However, Mulberry reflects Kate’s elegance but also her fashionable and timeless style. It’s fair to say that Kate is devoted to her British designers as one may think a royal should be.”

The description for the Mulberry Bayswater Clutch in Black Suede, which Kate has carried over 60 times, says: “The design is a combination of an ultra-slim clutch with the versatility of a classic wallet.

“Inside there is a slip and zip pockets and slots for cards, cash, etc. The chain strap can be tucked inside for an understated, slim-line clutch.”

Kate also owns the Mulberry Bayswater Clutch in Praline Suede. The Princess was seen carrying this bag twice in 2016, and twice again in 2019.

Kate, Princess of Wales is not the only member of the Royal Family who has carried a clutch bag from Mulberry. Back in 2013, Princess Eugenie was seen carrying the Mulberry Bayswater Clutch in Black Leather.

This was for The GREAT Britain MINI Tour in January of that year. Another member of the Royal Family who has carried a Mulberry bag was Meghan Markle.

The Duchess of Sussex opted for the Mulberry Zip-Around Clutch Wallet in Burgundy & Black Hair-Calf on February 4, 2017. This was before she was the wife of Prince Harry, who perhaps turned to a British brand to appease royal fans in the UK.

The description of this Mulberry bag says: “Mulberry’s Zip-Around Clutch Wallet is designed in a fetching combination of polished black leather and burgundy hair-calf leather. It is finished with a brass popper button, zip and detachable chain.