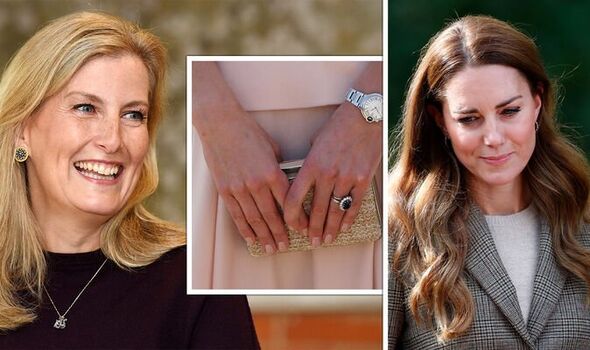 Female members of the Royal Family are reportedly not allowed to wear coloured nail varnish and only nude or neutral colours can be used.

Sophie, Countess of Wessex has been spotted many times wearing berry-coloured nail varnish, as well as red and burgundy.

The Duchess of Cambridge, on the other hand, religiously follows this rule although before she married Prince William, she loved wearing brighter colours.

Her Majesty is also a follower of the rule as she has been using the same Essie nude nail polish since 1989.

Daena Borrowman, a Marketing Manager at jewellerybox told Express.co.uk: “Royal women are not permitted to wear bright or dark nail paint on their fingernails.

“Only nude shades, sheer whites and light pinks are allowed.

“A firm favourite of the Queen’s is Essie’s ‘Ballet Slippers’.

“Kate wore a mix of ’28 Rose Lounge’ from Bourjois and the now discontinued ‘423 Allure’ from Essie.

“Meghan wore a mix of CND Shellac’s ‘Unmasked’ and ‘Negligee’.

“However, both Duchesses have occasionally favoured dark red or oxblood toenails on open-toed heels,” the expert revealed.

Royals are not supposed to wear these as “fake nails or colour nail polish is deemed vulgar by the Royal Family,” an unnamed royal source explained.

“It looks timeless and royal appropriate.

“While we’ve all heard rumours of rules, I know royal nails are always pretty, polished, and perfectly manicured.”

Sophie Wessex, however, is evidently a fan of bright colours as she deliberately chooses to ignore the royal protocol.

The royal opts for her favourite nail polish for most of her public appearances.

She is mostly seen wearing reds and dark pink tones.