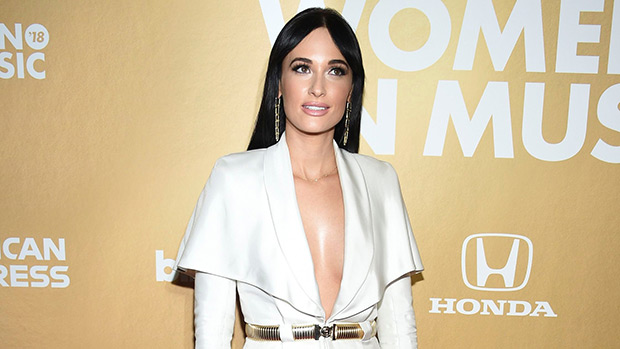 Country music’s Kacey Musgraves is known for her bold style choices, and she did not disappoint at the 2018 Billboard Women in Music Awards. See her look!

Country queen Kacey Musgraves, 30, is just one of the incredible trailblazers being honored at the 2018 Billboard Women in Music ceremony, and she went allllll out for the affair. The singer-songwriter showed up to the musical event in a super sexy suit consisting of a white blazer with a dramatic cape over her shoulders. She went braless as the front featured an open neckline that went all the way down to her belted waist. A matching mini-skirt and white heels finished off the glam yet super polished look. Kacey has never been shy about statement-making outfits or accessories, and she paired her look with a metallic belt, long gold earrings and a white box clutch. The “High Horse” singer always looks amazing, but this may be one of our favorite picks yet!

Kacey is being honored at the star-studded event as Billboard’s 2018 Music Innovator. She joins the likes of Ariana Grande, and SZA, who received nods as well! SZA is the recipient of the 2018 rule breaker award, which recognizes female artists who use their music and platform to defy traditional industry expectations, and advance a powerful message for young people. Kacey’s award recognizes “female artists who challenge musical convention, create positive change and contribute new ideas both in and outside of their creative work,” according to Billboard!

Before hitting the red carpet at the awards ceremony, Kacey spoke to Billboard about the specific changes she would like to see in the music industry. “The hot topics for years now have been gender and equality. And while I do align with a lot of those thoughts, I want to see change in all areas,” she said. “Where are our country artists of color? Where are our country artists of a different sexual orientation? I’m proud to be a woman in country music right now, but we have a long way to go. Gender is just the tip of the iceberg,” she added in the interview. It’s no wonder that Kacey was tapped for Billboard’s annual girl boss event!

Kacey looks beyond fabulous in this number! 2018 has definitely been the singer’s biggest year yet, and we can’t wait to see what 2019 holds for her!