SANTA FE, N.M. — On any given day, someone somewhere is likely leading an Artist’s Way group, gamely knocking back the exercises of “The Artist’s Way” book, the quasi-spiritual manual for “creative recovery,” as its author Julia Cameron puts it, that has been a lodestar to blocked writers and other artistic hopefuls for more than a quarter of a century. There have been Artist’s Way clusters in the Australian outback and the Panamanian jungle; in Brazil, Russia, the United Kingdom and Japan; and also, as a cursory scan of Artist’s Way Meetups reveals, in Des Moines and Toronto. It has been taught in prisons and sober communities, at spiritual retreats and New Age centers, from Esalen to Sedona, from the Omega Institute to the Open Center, where Ms. Cameron will appear in late March, as she does most years. Adherents of “The Artist’s Way” include the authors Patricia Cornwell and Sarah Ban Breathnach. Pete Townshend, Alicia Keys and Helmut Newton have all noted its influence on their work.

So has Tim Ferriss, the hyperactive productivity guru behind “The Four Hour Workweek,” though to save time he didn’t actually read the book, “which was recommended to me by many megaselling authors,” he writes. He just did the “Morning Pages,” one of the book’s central exercises. It requires you write three pages, by hand, first thing in the morning, about whatever comes to mind. (Fortunes would seem to have been made on the journals printed to support this effort.) The book’s other main dictum is the “Artist’s Date” — two hours of alone time each week to be spent at a gallery, say, or any place where a new experience might be possible.

Elizabeth Gilbert, who has “done” the book three times, said there would be no “Eat, Pray, Love,” without “The Artist’s Way.” Without it, there might be no adult coloring books, no journaling fever. “Creativity” would not have its own publishing niche or have become a ubiquitous buzzword — the “fat-free” of the self-help world — and business pundits would not deploy it as a specious organizing principle. 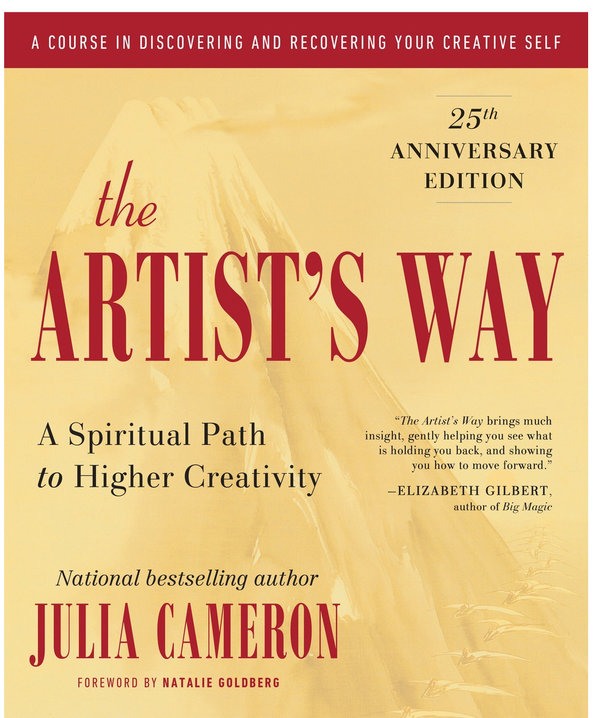 The book’s enduring success — over 4 million copies have been sold since its publication in 1992 — have made its author, a shy Midwesterner who had a bit of early fame in the 1970s for practicing lively New Journalism at the Washington Post and Rolling Stone, among other publications, and for being married, briefly, to Martin Scorsese, with whom she has a daughter, Domenica — an unlikely celebrity. With its gentle affirmations, inspirational quotes, fill-in-the-blank lists and tasks — write yourself a thank-you letter, describe yourself at 80, for example — “The Artist’s Way” proposes an egalitarian view of creativity: Everyone’s got it.

The book promises to free up that inner artist in 12 weeks. It’s a template that would seem to reflect the practices of 12-step programs, particularly its invocations to a higher power. But according to Ms. Cameron, who has been sober since she was 29, “12 weeks is how long it takes for people to cook.”

Now 70, she lives in a spare adobe house in Santa Fe, overlooking an acre of scrub and the Sangre de Cristo mountain range. She moved a few years ago from Manhattan, following an exercise from her book to list 25 things you love. As she recalled, “I wrote juniper, sage brush, chili, mountains and sky and I said, ‘This is not the Chrysler Building.’” On a recent snowy afternoon, Ms. Cameron, who has enormous blue eyes and a nimbus of blonde hair, admitted to the jitters before this interview. “I asked three friends to pray for me,” she said. “I also wrote a note to myself to be funny.”

In the early 1970s, Ms. Cameron, who is the second oldest of seven children and grew up just north of Chicago, was making $67 a week working in the mail room of the Washington Post. At the same time, she was writing deft lifestyle pieces for the paper — like an East Coast Eve Babitz. “With a byline, no one knows you’re just a gofer,” she said.

In her reporting, Ms. Cameron observed an epidemic of green nail polish and other “Cabaret”-inspired behaviors in Beltway bars, and slyly reviewed a new party drug, methaqualone. She was also, by her own admission, a blackout drunk. “I thought drinking was something you did and your friends told you about it later,” she said. “In retrospect, in cozy retrospect, I was in trouble from my first drink.”

She met Mr. Scorsese on assignment for Oui magazine and fell hard for him. She did a bit of script-doctoring on “Taxi Driver,” and followed the director to Los Angeles. “I got pregnant on our wedding night,” she said. “Like a good Catholic girl.” When Mr. Scorsese took up with Liza Minnelli while all three were working on “New York, New York,” the marriage was done. (She recently made a painting depicting herself as a white horse and Mr. Scorsese as a lily. “I wanted to make a picture about me and Marty,” she said. “He was magical-seeming to me and when I look at it I think, ‘Oh, she’s fascinated, but she doesn’t understand.’”) 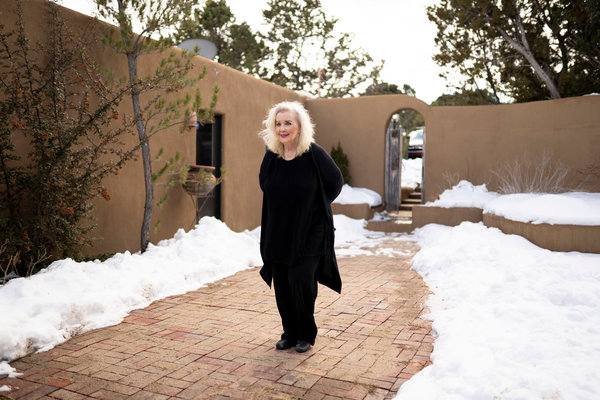 In her memoir, “Floor Sample,” published in 2006, Ms. Cameron recounts the brutality of Hollywood, of her life there as a screenwriter and a drunk. Pauline Kael, she writes, described her as a “pornographic Victorian valentine, like a young Angela Lansbury.” Don’t marry her for tax reasons, Ms. Kael warns Mr. Scorsese. Andy Warhol, who escorts her to the premiere of “New York, New York,” inscribes her into his diary as a “lush.” A cocaine dealer soothes her — “You have a tiny little wife’s habit” — and a doctor shoos her away from his hospital when she asks for help, telling her she’s no alcoholic, just a “sensitive young woman.” She goes into labor in full makeup and a Chinese dressing gown, vowing to be “no trouble.”

“I think it’s fair to say that drinking and drugs stopped looking like a path to success,” she said. “So I luckily stopped. I had a couple of sober friends and they said, ‘Try and let the higher power write through you.’ And I said, What if he doesn’t want to?’ They said, ‘Just try it.’”

So she did. She wrote novels and screenplays. She wrote poems and musicals. She wasn’t always well-reviewed, but she took the knocks with typical grit, and she schooled others to do so as well. “I have unblocked poets, lawyers and painters,” she said. She taught her tools in living rooms and classrooms — “if someone was dumb enough to lend us one,” she said — and back in New York, at the Feminist Art Institute. Over the years, she refined her tools, typed them up, and sold Xeroxed copies in local bookstores for $20. It was her second husband, Mark Bryan, a writer, who needled her into making the pages into a proper book.

The first printing was about 9,000 copies, said Joel Fotinos, formerly the publisher at Tarcher/Penguin, which published the book in 1992. There was concern that it wouldn’t sell. “Part of the reason,” Mr. Fotinos said, “was that this was a book that wasn’t like anything else. We didn’t know where to put it on the shelves — did it go in religion or self-help? Eventually there was a category called ‘creativity,’ and ‘The Artist’s Way’ launched it.” Now an editorial director at St. Martin’s Press, Mr. Fotinos said he is deluged with pitches from authors claiming they’ve written “the new Artist’s Way.”

“But for Julia, creativity was a tool for survival,” he said. “It was literally her medicine and that’s why the book is so authentic, and resonates with so many people.”

And, indeed, “The Artist’s Way” is stuffed with tools: worksheets to be filled with thoughts about money, childhood games, old hurts; wish lists and exercises, many of which seem exhaustive and exhausting — “Write down any resistance, angers and fears,” e.g. — and others that are more practical: “Take a 20 minutes walk,” “Mend any mending” and “repot any pinched and languishing plants.” It anticipates the work of the indefatigable Gretchen Rubin, the happiness maven, if Ms. Rubin were a bit kinder but less Type-A.

“When I teach, it’s like watching the lights come on,” said Ms. Cameron. “My students don’t get lectured to. I think they feel safe. Rather than try and fix themselves, they learn to accept themselves. I think my work makes people autonomous. I feel like people fall in love with themselves.”

Anne Lamott, the inspirational writer and novelist, said that when she was teaching writing full-time, her own students swore by “The Artist’s Way.” “That exercise — three pages of automatic writing — was a sacrament for people,” Ms. Lamott wrote in a recent email. “They could plug into something bigger than the rat exercise wheel of self-loathing and grandiosity that every writer experiences: ‘This could very easily end up being an Oprah Book,’ or ‘Who do I think I’m fooling? I’m a subhuman blowhard.’”

“She’s given you an assignment that is doable, and I think it’s kind of a cognitive centering device. Like scribbly meditation,” Ms. Lamott wrote. “It’s sort of like how manicurists put smooth pebbles in the warm soaking water, so your fingers have something to do, and you don’t climb the walls.”

Ms. Cameron continues to write her Morning Pages every day, even though she continues, as she said, to be grouchy upon awakening. She eats oatmeal at a local cafe and walks Lily, an eager white Westie. She reads no newspapers, or social media (perhaps the most grueling tenet of “The Artist’s Way” is a week of “reading deprivation”), though an assistant runs a Twitter and Instagram account on her behalf. She writes for hours, mostly musicals, collaborating with her daughter, a film director, and others.

Ms. Cameron may be a veteran of the modern self-care movement but her life has not been all moonbeams and rainbows, and it shows. She was candid in conversation, if not quite at ease. “So I haven’t proven myself to be hilarious,” she said with a flash of dry humor, adding that even after so many years, she still gets stage-fright before beginning a workshop.

She has written about her own internal critic, imagining a gay British interior designer she calls Nigel. “And nothing is ever good enough for Nigel,” she said. But she soldiers on.

She will tell you that she has good boundaries. But like many successful women, she brushes off her achievements, attributing her unlooked-for wins to luck.

Penelope Green is a reporter for Styles. She has been a reporter for the Home section, editor of Styles of The Times — an early iteration of Styles — and a story editor at the Times magazine. @greenpnyt • Facebook